U.S. Colonel James Suriano, Commander, U.S. Army Garrison Fort Hunter Liggett stands with the President of the Naval Postgraduate School, Vice Admiral (Ret.) Dan Oliver as he gives a tour of this camp to leaders from different Department of Defense and national security organizations from the Monterey Bay area, known as Team Monterey during a visit to Fort Hunter Liggett, Aug. 12.

Leaders from the different Department of Defense and national security organizations around the Monterey bay area, known as Team Monterey, made a visit to some of the installations they collaborate with in facing national defense issues and local challenges, Aug. 12.

"Our visit to Fort Hunter Liggett and Camp Roberts was really outstanding,” said Mike Clancy, Technical Director for the Navy’s Fleet Numerical Meteorology and Oceanography Center. “We got to see some cutting-edge technology up close and personal, and it clearly demonstrated how collaboration and synergy among the Team Monterey institutions is contributing enormously to our national defense."

The purpose of the trip was for these leaders to better familiarize themselves with the capabilities as well as the layout of the installations they work with. All this is part of the vision of Congressman Sam Farr, D-Calif., in conjunction with the different Department of Defense organizations in the area – a collaborative team environment to connect these units and apply their capabilities in a joint, collaborative way to solve national security issues as well as challenges in the local area.

Congressman Farr first realized the need for this type of union during the Base Realignment and Closure (BRAC) process. While studying the different installations he became aware of the multiple capabilities and the enormous potential these installations had.

The first stop on the tour was the U.S. Army’s Fort Hunter Liggett, and its Combat Support Training Center (CSTC). The center’s mission is to provide training for Combat Support and Combat Service Support units. Through its varied training areas and facilities, the CSTC can support year-round, multi-component, and interagency training for multiple combat units.

The group toured a portion of the more than 165,000 acres of training grounds and viewed some of the weapons qualifications ranges, and urban assault courses as well as some of the Improvised Explosive Device (IED) Defeat Lanes and even a C-17, C-130 aircraft capable dirt airstrip, Schoonover.

Singh mentioned that the Air Force uses the strip during war exercises throughout the year and to do their qualifications, “The Air Force saves a lot of money doing their annual training here.”

Along with the airstrip, Fort Hunter Liggett also has the capability of landing and dispatching emergency medical evacuation helicopter flights, said Singh.

“We have used it in the past to assist the Monterey County for emergency evacuations,” added Singh. “We’re here to help everyone.” 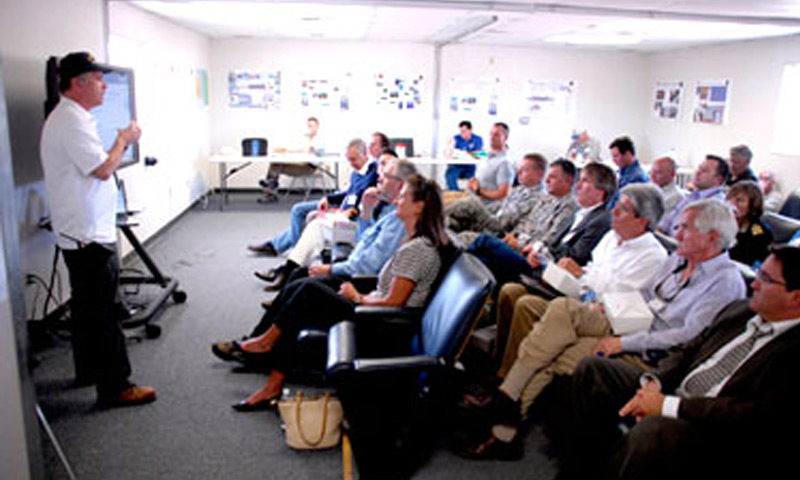 Information Sciences Associate Professor Ray Buettner, Director of Field Experimentation at the Naval Postgraduate School gives a presentation of the multiple field experiments being carried out at the Camp Roberts’ McMillan Airfield, during a visit by leaders from different Department of Defense and national security organizations from the Monterey Bay area, known as Team Monterey during a visit to Fort Hunter Liggett, Aug. 12.

Following the CSTC, the Team Monterey members made a stop at the California National Guard’s Camp Roberts, an installation with a historical background that has housed and trained soldiers since World War II, including celebrities with such names as Clark Gable and Bob Hope.

“The whole camp was built in the winter of 1941,” said Camp Roberts Museum Curator and Foundation Director Gary J. McMaster. “It was one of the Army’s largest infantry and artillery centers. A lot of stars were sent here to complete their military training – Steve Allen, Red Scelton, Robert Mitchum and many, many others.”

Aside from its famous past and historical background, the mission of Camp Roberts today is to facilitate training, mobilization and security of the National Guard, Army Reserve and active component units in support of federal, state and community missions.

The group toured the installation full of old World War II barracks that housed the thousands of infantrymen during the war and they made their way to the installation’s McMillan Airfield, where NPS’ Center for Interdisciplinary Remotely Piloted Aircraft Studies maintains a dedicated research support facility.

Here, the group experienced first-hand another area of NPS support in action during a Field Experimentation (FX) Program demonstration. The FX Program uses part of the installation to hold quarterly experiments sponsored by the U.S. Special Operations Command to develop new technologies that can be integrated quickly into the field.

“We have students out here from courses at NPS doing their course work, their thesis work, and faculty members doing research,” said Information Sciences Associate Professor Ray Buettner, Director of Field Experimentation at NPS. “We use Field Experimentation to tie those things together.”

The tour ended with a visit to the Defense Satellite Communication System (SATCOM) facility also located in Camp Roberts. The Camp Roberts facility is the main U.S. Army communications facility on the West Coast and provides worldwide communications between the U.S. National Command Authority and deployed military units.