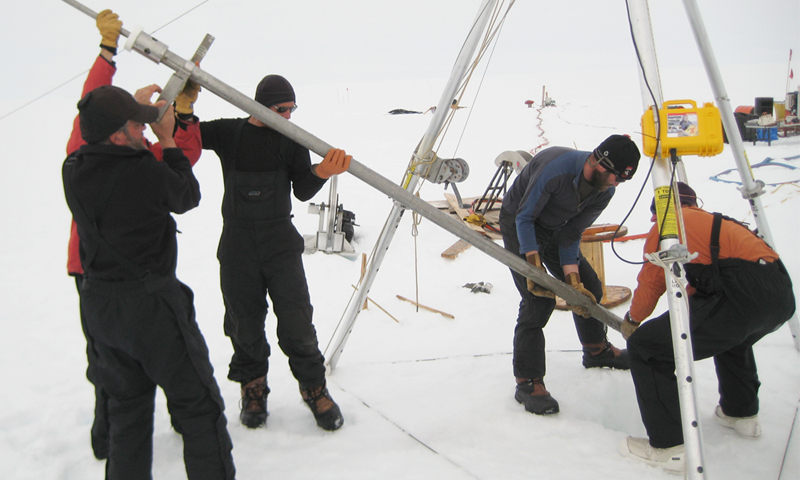 After drilling through the 500-meter thick Pine Island Glacier, a team of NPS researchers prepare to collect a sediment core from the Antarctic Ocean floor more than 700m below. The resulting analysis of the core, released today, details the massive glacier’s history of retreat.

A major study, released in late November in the journal “Nature,” reveals the history of retreat of the massive Pine Island Glacier (PIG) in western Antarctica, widely considered one of the largest contributors to global sea-level rise.

An international team of scientists, including researchers from the Naval Postgraduate School (NPS) in Monterey, made the study possible, resulting in scientific evidence that the present-day thinning and retreat of PIG, one of the largest and fastest shrinking glaciers in the world, is part of a climate trend underway as early as the 1940s.

Pine Island Glacier’s retreat has been well established since satellites originally observed the phenomenon in 1992. But until now, it was not known when the retreat of the glacier started, or its underlying cause.

“Our results suggest that, even when climate forcing (such as El Niños, which create warmer water) weakened, ice-sheet retreat continued,” said lead author James Smith of the British Antarctic Survey (BAS). “This finding provided the first hint that the recent retreat could be part of a longer-term process that started decades or even centuries before satellite observations became available," Smith said.

The study would not have been possible without the efforts of the NPS Department of Oceanography team, Dr. Timothy Stanton, Dr. William Shaw and James Stockel. During a research expedition to the remote glacier to deploy NPS-developed sensor packages to study the melting phenomenon under the ice sheet, the NPS researchers used their access to the Antarctic sea floor to support the BAS study.

The team helped drill through the 500-meter ice shelf to place their own instrumentation, but first deployed an instrument to retrieve a sediment core from the bottom of the Antarctic Sea, 700 meters below. It is these very sediment cores that were used in the landmark study.

“The [NPS team] helped get the very unique sediment cores from the profoundly remote PIG site for our British Antarctic Survey colleagues,” explained Stanton. “We deployed a sediment corer just after we participated in completing the 0.2-meter-wide bore holes through the 500-meter thick ice shelf at each of the three sites we occupied on the Pine Island Glacier Ice Shelf during the 2013/2014 field season.

“In many ways, this was an add-on to the deployment of the NPS developed ocean/ice interaction sensors that we were setting just below the ice shelf,” Stanton continued. “We realized the importance of the sediment records in establishing the recent (last 100 year) record of the ice shelf grounding line that determines the stability of the Western Antarctic Ice Sheet.

“Helping with the sediment coring was a great investment of time, as James Smiths' BAS team were able to execute a very detailed analysis of the 80cm deep sediment cores to infer the rapid retreat of the ice shelf during the last 60 years,” he said.