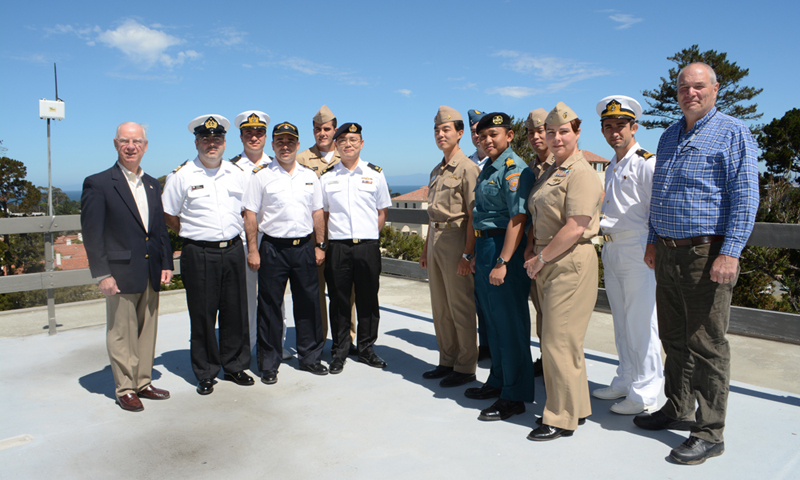 NPS’ undersea warfare program is experiencing an influx of students from allied foreign nations, many from countries along the strategic Pacific Rim.

“Submarines have become the weapon of choice for a lot of small countries because recent developments in missile technology, and the need to be survivable, have made them a better choice than surface ships. As a result, there is a larger number of international students attending NPS’ undersea warfare curriculum. Their countries want them to be more knowledgeable of the undersea world,” said retired Rear Adm. Jerry Ellis, a 36-year Navy veteran, former Pacific Submarine Force Commander and former Oceanographer of the Navy who now leads the program.

Even nations like Egypt, which do not have a strong submarine force, have enrolled students in the curriculum in order to develop, in addition to other things, the anti-submarine warfare capabilities necessary to address potential threats from the undersea domain.

Canadian Air Force Capt. Liam Doyle is currently enrolled in the program. While an Air Force officer, he serves as an Air Combat Systems Officer aboard a naval vessel out of Canadian Forces Base, Sheer Water. His interest in the undersea warfare program stems from his nation’s procurement of several U.S. CH-148 Cyclone helicopters – an aircraft well suited for anti-submarine warfare.

“It is leaps and bounds ahead of what we have now,” said Doyle. “We came to NPS to get the academic and theoretical base that we need to exploit this new aircraft to its full potential.”

Ellis notes that it is not just technological developments like these that have driven more nations into the undersea domain. Cost considerations and stealth improvements in non-nuclear submarines are also the factors driving renewed interest, and access to, in undersea warfare.

“The undersea world is the only place you can go that offers a relatively safe haven for offensive and defensive operations,” Ellis noted. “In the past, you could get close enough with your carrier strike group to launch your planes and attack an adversary. Now, if you are that close, you are in potential jeopardy since you are in missile range.

“We can operate there, but it is much more difficult and challenging than ever before. Operating from the undersea world, where we still enjoy undersea dominance, is clearly of great importance,” he continued.

Stealth has always been one of the most attractive features of any submarine force and today’s submarines have never been more quiet. The “silent service” continues to offer strategic and tactical advantages that an increasing number of nations would like to exploit.

“If you can be stealthy and operate under the sea where you cannot be detected, you can do all sorts of things,” Ellis said. “You can operate in someone else’s waters without anybody knowing you are there. You can choose when and where you want to do something, whether it be an attack or merely gathering intelligence.”

Cost may also be a factor in the increased interest of a growing number of nations toward pursuing submarine technology. While the U.S. does not sell submarine technology, other nations, including Russia, France and Germany do, and the cost of purchasing an effective diesel powered submarine is within the range of some developing nations.

“Many countries have never had a submarine before, and some of those countries that did, had submarines that were not very capable. They are now buying more modern submarines,” explained Ellis. “You can buy a very good diesel-electric submarine for $300-500 million, and if it has the right number of weapons, sensors and the ability to operate in stealthy mode, it can sink a destroyer, cruiser or even a carrier. Submarines provide a disproportionate advantage.”