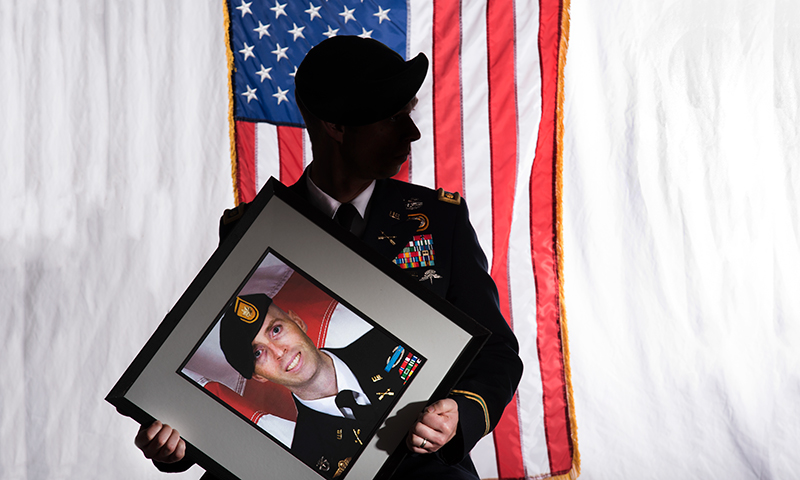 NPS Special Operations Program student U.S. Army Maj. Peter Arendt is the recipient of the NPS Foundation Pat Tillman Leadership Award for the 2018 Fall Quarter, presented Dec. 4 on the university campus. Arendt is being recognized for his unyielding support for fellow NPS student Army Maj. Sean Maples and his family, as he faithfully stayed by his comrade’s side during his long battle with cancer. Maples, who sadly succumbed to his illness October 14, is co-recipient of the award posthumously ... His wife, Katie Raychel, accepted the award on his behalf.

Arendt met Maples while at 1st Special Forces Group at Joint Base Lewis-McChord, in Tacoma, Wash. They served in the same battalion together for four years and had known Maples for six, including their academic time at NPS. Arendt was only one of Maples’ best friends ... He had many, Arendt says.

“Sean is the one who meets the criteria for the [Pat Tillman] Award, and I just get to be alongside my friend,” Arendt said, noting he couldn’t how many times he saw Maples tackle the next challenge despite his battles with cancer.

“I'm honored that others can hear Sean's story, about how he successfully beat cancer by becoming a Green Beret, summiting Mt. Rainier, deploying to combat and finally, receiving his master's degree from NPS,” he said.

On that particular ascent to Mt. Rainier, Maples saved the life of a team member who was suffering high altitude cerebral edema. Maples and his rope team safely descended with the injured Soldier to medical care and then proceeded to make a second ascent to summit the 14,000-foot peak.

This was Maples’ third and final bout with cancer. He had been diagnosed with melanoma following his deployment to Afghanistan several years ago.

“To me, receiving this award embodies the first SOF [Special Operations Forces] truth that humans are more important than hardware,” added Arendt. “I would like others to be inspired by Sean's desire to succeed despite the challenge of cancer, and how he didn't let cancer get in the way of achieving his goals and dreams.”

Arendt, humbled by the nomination and deflecting the attention to his friend, was nominated by fellow student, Army Maj. Jordan Smith, along with a few other NPS Department of Defense Analysis (DA) professors and advisors.

“[Arendt’s] military record is impressive with combat and operational deployments to the PACOM and CENTCOM theaters.  His selection for NPS best demonstrates his potential for positions of increased responsibility and leadership.  He was, and is continually selected for special assignments,” noted Smith.

“Academically, Peter took on a challenging and perhaps controversial topic delving into the efficacy and opportunity cost of military online training which has stakeholders' interest at senior levels within the DOD with millions of allocated dollars.  His research hits a tough topic which needed to be addressed,” he added.

NPS’ National Intelligence Chair, Dr. John Tullius, a faculty member of the DA department, had both Maples and Arendt in his Human Intelligence (HUMINT) course last summer and recalls the students vividly.

"I just want to express my strongest support for this nomination—I had Majors’ Arendt and Maples in my HUMINT class summer quarter and this experience has left an indelible mark on me," said Tullius.

“Sean’s perseverance and hard work was something I will never forget, nor will I forget Maj. Arendt’s role in helping him with his coursework, dealing with his illness, and supporting his family.  Maj. Arendt’s total selflessness and willingness to fully support a dying comrade is something that I am sure would make Pat Tillman proud.

“The bottom line for me is that I was amazed at how Sean persevered until he literally could not attend class anymore—his mid-term was one of the best out of over 30 students, and I know it must have been incredibly difficult to do that quality of work with his deteriorating condition and medical appointments,” Tullius stressed.

“Sean told me he had Stage 4 cancer, and that he would do his best in class but he had numerous medical appointments.  My initial reaction was, ‘Why is he still in school? Why is he not with his family?’ I had those questions, because I did not know Sean Maples yet.

“Last fall, Sean was not only in one course I taught but two different courses. There, Sean reminded me, eight hours per week, why I love having the privilege of teaching military officers. He actually sharpened me more than I think I did him,” Rice continued. “As such, Sean embodies my favorite Proverb, 27:17 ... ‘As iron sharpens iron, so one man sharpens another.’”