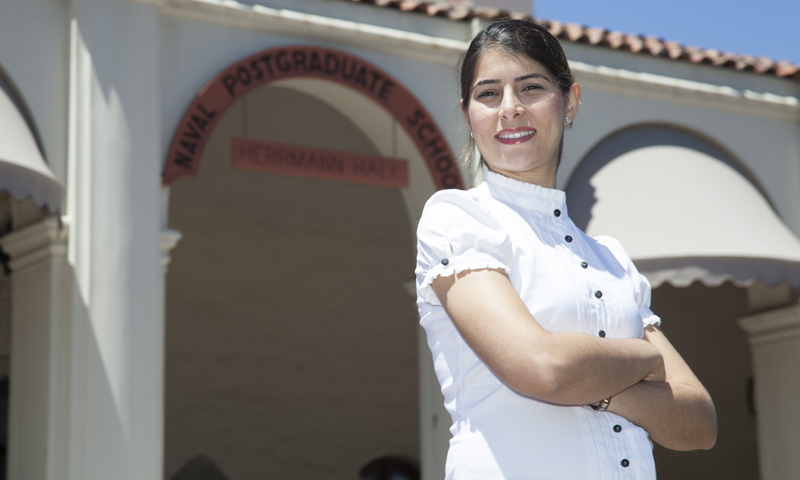 The Military Operations Research Society (MORS) awards the MORS/Tisdale award to a student whose thesis offers immediate or near-term value to the U.S. or its allies.

“Begum’s master’s thesis is of high practical value. It is already of high interest in Turkey to the organizations responsible for helping secure the border with Iraq,” said NPS Operations Research Professor Thomas Lucas. Ozcan decided to pursue her thesis topic after attending a class taught by Lucas.

“My research explored the capaility of UAVs to monitor terrorist activity in areas of rough terrain … I proved that UAVs are an efficient means of monitoring rough terrain and I researched the best manner in which to utilize them,” said Ozcan. “We need a more robust border security architecture, UAVs should be at the center of that architecture.”

In order to explore this architecture, Ozcan had to create a complicated simulation to test her theories.

“[Ozcan] built a simulation and did massive state-of-the-art experimentation with it, looking at over 100,000 simulated border incursions while efficiently exploring more than a score of input variables,” said Lucas.

“Begum’s choice of a thesis topic is an example of her strength as an innovator. She identified a potential new technology area that could be of great benefit in securing a border,” continued Lucas.

Turkey has been embroiled in a decades long conflict with the Kurdistan Worker’s Party (PKK), a U.S. designated foreign terrorist organization that often takes advantage of the rough terrain that characterizes Turkey’s porous border with Iraq.

“I became interested in this subject due to my nation’s history with the PKK, we have been fighting them since my childhood in the 80s,” said Ozcan. “ I am interested in evaluating ways to prevent terrorists from crossing into our borders.”

Ozcan noted that although Turkey currently employs a variety of UAVs, their employment is generally in reaction to intelligence reporting. She insists that a networked system of UAVs conducting surveillance operations is more efficient and is likely to prevent future terrorist attacks.

“The border area is very rough and it is very tough to send anti-terrorist teams due to the mountainous and rugged nature of the terrain,” said Ozcan. “I tried to show that although the terrain is very difficult, that UAVs are a viable option for terrorist interdiction and border monitoring.”

According to Lucas, the MORS/Tisdale award is highly competitive and represents an outstanding accomplishment for any student. Ozcan’s accomplishment is even more remarkable when considering the fact that she earned the honor while conducting research in a foreign language.

“I am really proud of earning this award as a Turkish Air Force officer. It is a great starting point for my career … NPS has been very useful to me and NPS professors have a great deal of military expertise, I wish I could stay longer and pursue my doctorate,” continued Ozcan.

The MORS/Tisdale award was named in honor of Lt. Cmdr. Stephen A. Tisdale after his tragic death in the collision of two P-3 Orions conducting a submarine tracking exercise at low altitude off the California coast on March 21, 1991.