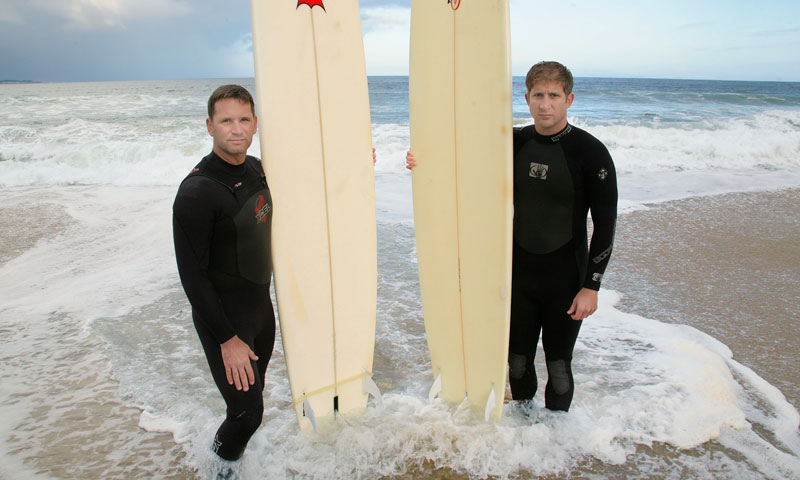 On a crisp Saturday morning, Oct. 29, local resident Eric Tarantino, 27, was bitten along the right side of his neck and shoulder by an estimated 15-20 ft. shark while surfing at Marina State Beach in nearby Marina, Calif. As Tarantino and his friend struggled to paddle back to shore, they were fortunate to find two Naval Postgraduate School students – Army Maj. Jonathan Bleakley and Master Sergeant Garric Banfield – who just happened to be on the beach, getting ready to paddle out and hit the waves themselves.

The two active duty service members, and Naval Postgraduate School Defense Analysis students, with advanced training to treat acute trauma like this immediately knew something was wrong, and jumped into action.

“We could tell something was going on when these two were paddling to the shore and then ran up onto the beach,” Banfield said. “Someone said that he was bit by a shark, and we knew what was obviously going on. Even before we got there, we were yelling for first aid kits and one of our friends went to his vehicle to get one.  With our Army training, the combat life saver training kicked in and we were calm and able to assist the victim.”

Bleakley added, “The guy’s buddy helped him onto the beach and we saw them, met them halfway, and helped to bring him up to the parking lot and laid him down on the sidewalk where Garric and I just kind of took over. Another individual with obvious medical training helped us … Other people grabbed towels and sheets and one got a sleeping bag. We appreciated all of the efforts.”

The victim was conscience and talking, and had good color, they noted. Banfield applied pressure inside the wound to the neck, while Bleakley was tending to the wounds on the forearm where he had cuts of approximately four inches on the top and six inches on the bottom. A towel was wrapped around the shoulder and arms where pressure was being applied.

After what seemed like an eternity for both the victim and rescuers, paramedics arrived in just eight minutes to take over. The students knew the victim was experiencing significant blood loss, and their quick response limited this, but they take little credit for their actions.

Bleakley remarked, “I take no credit for it other than having the Army training that I did. I was very impressed with how my training turned to him. I’m thankful that we have that training.”

Amazingly, both rescuers still did go out into the water later that day, just not there at the Marina State Beach location. A friend of theirs, also studying at NPS, was with them for his first day of surfing, and in spite of witnessing the shark attack, still went out with both officers for his first surf.

Bleakley, who later that week welcomed his third son, said it was a pretty eventful week for him and his family. And while their families were not wholly pleased they still went out surfing, both men remarked that their significant others were proud of them, and were glad that they had been there to assist Tarantino.

Banfield has been in the Army for almost 20 years, while Bleakley has 11 years as an officer after three years in the Enlisted Reserves. Both arrived at NPS in June 2011 into the Defense Analysis curriculum from the 95th Civil Affairs Brigade currently at Fort Bragg, N.C. Civil affairs units help military commanders by working with civil authorities and populations to lessen the impact of military operations during peace, contingency operations and declared war. Civil Affairs officers focus on humanitarian assistance and training, and building partner nation capacity through advancements in economic, health and educational systems.