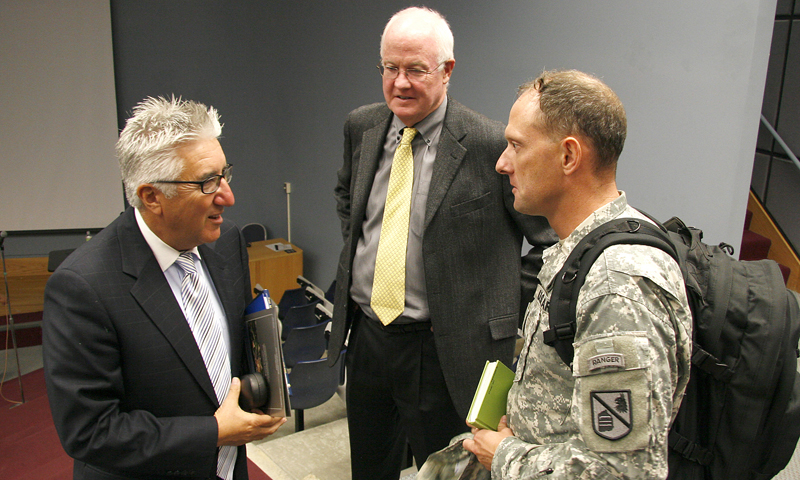 Since late 2010, the “Arab Spring" has brought the spotlight of the world onto North African and Middle Eastern countries in the thick of political protests and countrywide unrest. For Libya, the tensions have reached beyond a critical mass, with clashes between rebels and dwindling forces loyal to Col. Moammar Gadhafi leading to, as of Aug. 23, the now fugitive former Libyan dictator disappearing and on the run.

With so much uncertainty surrounding the future of Libya, the Naval Postgraduate School’s National Security Affairs (NSA) students had a unique opportunity to hear about the conflict and the U.S. role in humanitarian assistance firsthand, from U.S. Ambassador to Libya, the Honorable Gene Cretz. In 2008, Cretz was appointed the first U.S. Ambassador in Libya since 1972.

In what was his first visit to NPS, Cretz made time for a candid discussion with students, addressing their questions and concerns about the region, and how the instability in Libya might impact the United States.

“We don’t normally get the opportunity as practicing diplomats, because of the pace of travel and everyday routine, to get out and talk to audiences beyond the beltway,” explained Cretz. “So I find it very important to reach out not only to civilian audiences, but certainly to military audiences. While we have interactions certainly at the Pentagon and in Washington daily with our military colleagues, the opportunity to come here to talk to officers from the different services who are expanding their regional awareness beyond the training they get from the military itself is very positive.”

Cretz joined the Department of State in 1981 and has served throughout the Middle East. Throughout his career he has seen firsthand the role that cultural awareness and understanding can play in international relations.

During his lecture, Cretz was able to engage international students in what role their military has played in support of Libya. He noted the value of not only educating military officers in areas of international relations and security studies, but also in the everyday interactions with international officers studying at NPS.

“When you look at international relations and diplomacy, at its most basic level, it comes down to people to people relationships,” noted Cretz. “Having our officers engaging with the military from other countries not only gives us the benefit of their being able to establish personal relationships, which are of immeasurable value in terms of diplomacy, but to have the foreign officers coming here and seeing the American military … It’s all part of a symbiotic process by which we increase our understanding of each other.” 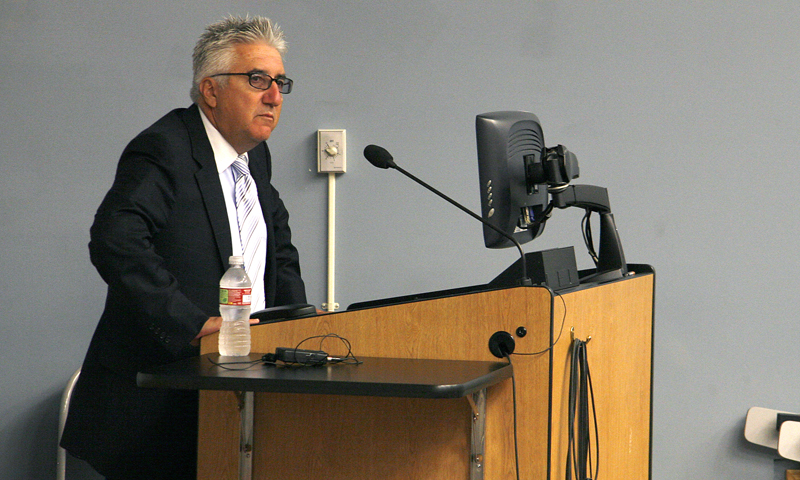 In his role as Ambassador to Libya, Cretz has worked on strengthening relations between the United States and Libya. He explained to students the current state of affairs in the country as they deal with political unrest that has reached a breaking point.

Cretz, who has his Master of Science Degree in Linguistics from the State University College at Buffalo, noted that our military, and our citizens, have the benefits of education, which is something Libyans do not have ready access to. He expressed hope that Libya’s future would include a strong educational system for military and civilians as they work to rebuild their government on the backs of average citizens with little to no experience in government affairs.

“It’s clear that the education system of any country is absolutely the most important part of its future. Unfortunately, the Libyans have been under the thumb of this oppressive and stifling regime for over 41 years. They have not had the opportunity to experience education in the full and free manner that we in the West have,” explained Cretz. “And how do you have a population that can elect representatives and choose its own government if they are not educated in terms of what history, philosophy and politics mean? So I think it’s absolutely critical that the education system in Libya will be revamped at some point to allow Libyans to have that kind of experience that others have had for many years.”For students, the opportunity to hear from Cretz was a unique opportunity for a more detailed look at some of the regions that are part of the Arab Spring, and what the conflict in the region might mean for U.S. relations in North Africa and the Middle East.

“It was interesting to listen to somebody who is not only the first Ambassador in Libya for many years, but also has gone through all of the issues that are taking place in the country,” explained Lt. Nick Quihuis, a student in the School of International Graduate Studies’ regional studies curriculum. “It was an interesting firsthand account of the transition from the Embassy being stood up to then being forced to leave. So it is a unique opportunity to meet a guy who has been there, and eventually, hopefully, things settle down and he gets to go back and continue to work on Libya’s relationship with the United States.”