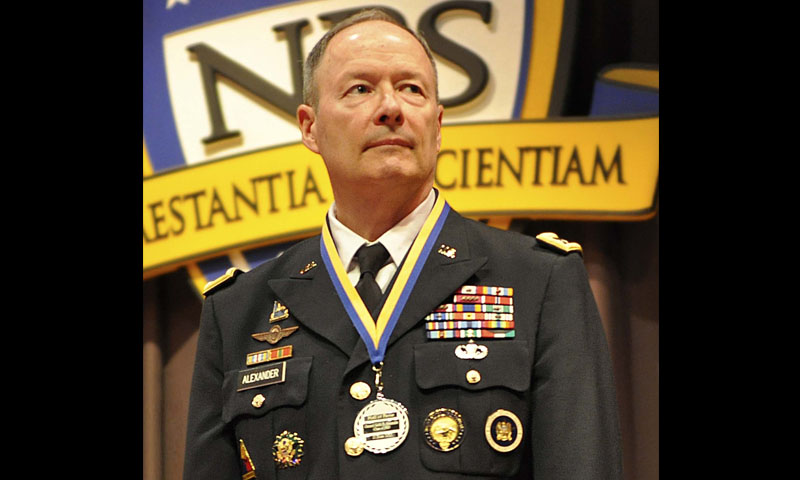 U.S. Army Gen. Keith B. Alexanderis officially inducted into the NPS Hall of Fame during the Spring Quarter graduation ceremonies.

“It is my privilege to welcome Gen. Alexander to NPS’ distinguished Hall of fame. I was blessed to work for Gen. Alexander for five consecutive years, including a year on his personal staff,” said NPS Interim President Rear Adm. Jan E. Tighe. “I witnessed firsthand his inspirational leadership and his unwavering dedication to our nation. It is truly an honor to preside at today’s ceremony.”

Alexander earned advanced degrees in systems technology (electronic warfare) and physics while attending NPS in the 80s. Tighe commented on both the academic and professional accomplishments that led to Alexander’s induction.

"Gen. Alexander’s contribution to our nation’s security and to our great institution are long standing, and will endure well beyond his tenure,” said Tighe. “His induction into the Hall of Fame is in recognition of these contributions, his continued commitment to professional excellence, and his tireless efforts to defend our nation in cyberspace.”

As head of Cybercom in Ft. Meade, Md., Alexander is responsible for planning, coordinating and conducting cyber operations, as well as the defense of Department of Defense (DOD) computer networks. In his capacity as NSA director, he is responsible for a DOD agency with national-level foreign intelligence, combat support, and U.S. national security information system protection responsibilities.

“I think one of the most important things we can do for our students here is to prepare them for the future role they will play in the military,” said Alexander.

“From my perspective, having people that are educated and who understand the technical side of cyber, especially information technology, computers, how they communicate, how people hack into them, and what must be done to protect them, takes great technical skill,” he continued.

“What NPS does is train people at the fundamental level on how theses things operate … students can then take that deep technical understanding and use it in military operations around the world,” Alexander added.

“One of the most important things that we can have is people who technically understand how systems work. The more they understand how computers work together, the better they will be able to use and operate them for the good of our military,” said Alexander. “I believe educating our military force, enlisted and officer, is one of the most important things we can do and we really appreciate what you are doing here to help build that force in this area.”

In regard to the research conducted by students and faculty at NPS, Alexander spoke to the need for innovative minds capable of understanding the totality of the network and how it operates in order to defeat an evolving adversary.

“Understanding our vulnerabilities and the way the adversary will try to access or shut down our systems requires broad training and education,” said Alexander. “If you think about a distributed denial of service attack against our country, and then see how that attack is actually going to be carried out, our military service has to know how that is going to work. We must be able to see where the command and control sites are, where the hot-points are, and what our military members need to know to take down that threat.

“If our service members do not understand the fundamentals of how that works, they will not be able to defeat it … You are creating an equivalent in cyber warfare to what we have in naval and ground warfare, they have to compliment each other and we need to know how to use these instruments to defeat that threat for the good of our nation,” continued Alexander.

Alexander also spoke of the evolving nature of U.S. Cyber Command and the need to build an educated cyber force.

“The mission for the U.S. Cyber Command is evolving. We are responsible for defending the nation against a cyber attack, as well as for operating, building and defending our DOD networks,” said Alexander. “In my opinion, the easiest way that the adversary can come against us is cyber – that is where we are going to be challenged the most and in the near term. We have to build the force, train them and get them ready to do that which our nation depends upon us to do.”

The NPS Hall of Fame was established to recognize the accomplishments of the university’s most distinguished alumni and friends who, through the attainment of positions at the highest levels of public service, have made the greatest contributions to society, their nations and to the Naval Postgraduate School.

Alexander is the 20th inductee into the hall, joining former Commandant of the Marine Corps General Michael W. Hagee and 17th Chairman of the Joint Chiefs of Staff Adm. Mike Mullen, among many other highly-distinguished graduates.