Under Secretary of the Navy Outlines State of the Navy-Marine Corps Team to NPS Students, Faculty

null Under Secretary of the Navy Outlines State of the Navy-Marine Corps Team to NPS Students, Faculty

Under Secretary of the Navy Outlines State of the Navy-Marine Corps Team to NPS Students, Faculty 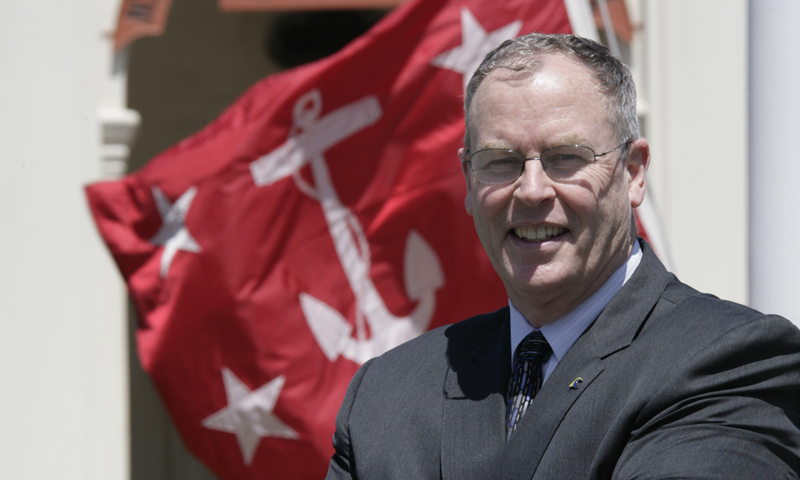 The Honorable Robert O. Work, Under Secretary of the Navy, is pictured in front of Herrmann Hall during a campus visit, May 10. Work, a Space Systems Operations graduate, visited his alma mater to deliver a “State of the Navy-Marine Corps” address while also participating in the “Robots in the Roses” research fair.

Work began by commending the men and women of the Armed Forces for their commitment, noting that the current U.S. Navy and Marine Corps are arguably the best they have ever been in the nation's history.

"The Sailors and Marines we have today are just unbelievable," Work said. "You do not know how lucky you are," he noted, adding that the current force is the most well-educated, tech-savvy, motivated, disciplined group of people we have ever had in our history.

"These [Sailors and Marines] are the best people on the planet," he continued. "They are the true secret weapons of the Navy-Marine Corps team."

During his presentation, Work addressed the concerns and challenges currently facing defense leaders. At a time when the world's waterways are being so heavily utilized for trade, their importance to the global economy is growing. But the world's oceans also facilitate trafficking of a majority of the world's illicit drugs.

"The big thing for the Navy and Marine Corps team is that the oceans are more vital to both our national and our global trade than any time in history," he continued.

Work noted that the military's organizational structure is as focused as ever on being battle-ready and adaptable. Military leaders are focused on implementing a new strategic concept to reduce operational expenses, and to look for engagement support from allies and partners. However, Work emphasized that a smaller, leaner force does not mean a weaker force.

"We are a Navy and Marine Corps team that is built and ready for war, and we operate forward to preserve the peace," Work emphasized. "We are first a warfighting organization. The [chief of naval operations] has said it, and the commandant has said it: warfighting first. We are built and ready for war, and we'd better never, ever lose our edge. But we will operate forward as we always have, since 1798."

Work spoke about the size and capabilities of today's fleets, outlining Navy, Marine Corps and Coast Guard assets and manpower. He pointed out the fact that outside of the U.S. Navy, 17 of the 19 next-largest fleets are allies or friends of the United States and they often can be counted on for support. While he acknowledged that many consider the number of U.S. Naval ships to be comparatively small now to what it might have been in the past, the versatility of today's fleet is unparalleled.

"We have big payload bays and open combat systems," he noted. "We can adopt to the threat faster than bad guys can build ships. It's a tremendous advantage because we think of ourselves as a total force battle network."

Also during his visit, Work explored current research efforts underway by NPS students and faculty during the 2nd annual Robots in the Roses event, sponsored by the Consortium for Robotics and Unmanned Systems Education and Research.