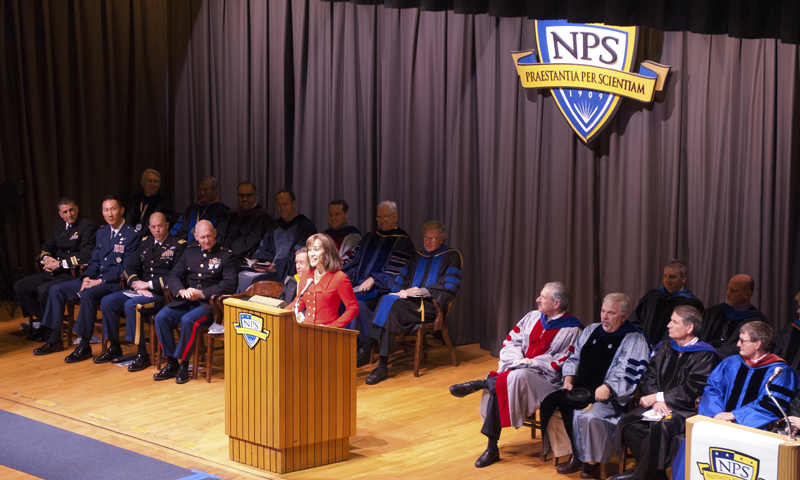 Under Secretary of the Navy the Honorable Janine Davidson offers the commencement address during the Naval Postgraduate School’s (NPS) Fall Quarter Commencement Ceremony at King Auditorium, Dec. 16. The university said farewell to 326 graduates, including 39 international students from 16 nations, earning 328 advanced degrees during the ceremony.

NPS President retired Vice Adm. Ronald A. Route welcomed the assembled students and their families to the ceremony.

“It is our commitment to you that your NPS education will provide you with the foundation upon which the rest of your careers and lifelong learning are built,” said Route. “Our nation will count on you graduates as strategic influencers, problem solvers, and leaders wherever your careers take you.”

On hand to congratulate the graduating class was Under Secretary of the Navy the Honorable Janine Davidson, who served as commencement speaker.

“It is truly an honor to be here today,” began Davidson. “You may not remember the speaker, or even the message, but I’m pretty certain that you will all remember how you feel today.

“People are often so anxious to get out of these ceremonies. You want to rush through the now, through this moment,” she continued. “This is an important moment, and you have worked really hard to get where you are today, so savor it, for just a moment.”

Davidson encouraged the graduates to remember that their time at NPS is not just an opportunity to step aside from the usual high operational tempo, and stressed that they are now part of something unique.

“As graduates of Naval Postgraduate School, you are part of something special. NPS in Monterey, California, its faculty, its mission, and its role that it plays in our national security community is like no other,” she said. “No civilian institution has this concentration of security-minded researchers across so many disciplines. These professors get it, they get you, and they understand the demands of the jobs and the responsibilities you will face in the coming stages of your careers.”

Davidson also reminded the graduating students that the results of their efforts were more than just completed degrees, but contribute to the nation’s most pressing national security challenges. 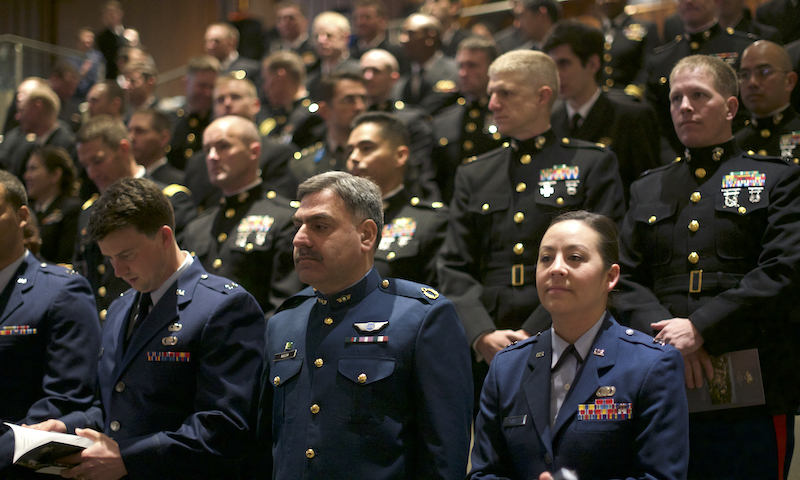 Members of the 2016 Fall Quarter graduating class prepare to cross the stage in King Auditorium, marking the completion of the NPS studies, December 16. Under Secretary of the Navy the Honorable Janine Davidson served as commencement speaker for the class of 326 graduates, including 39 international students from 16 nations, earning 328 advanced degrees.

“These professors are plugged in to the real world, and they will encourage you to explore topics related to the core security challenges facing the nation and the world,” said Davidson.

“At NPS, you can write a classified or unclassified thesis, and know that the issues you are exploring, the puzzles you are pondering, and the answers you generate will be valued, and of immediate importance, to our senior operational leadership … This in return will ripple back to you, your colleagues, and to the next generation of Sailors and their partners deployed around the globe,” she added.

“You all have added to the bodies of knowledge on technical topics, from unmanned systems, business issues, aviation maintenance, and counter insurgency among many others,” she said.

Davidson recognized the diversity of the class, comprised of more than 300 new NPS alumni representing all five U.S. uniformed services, the national guard, DOD and interagency civilians, 39-partner nations and homeland security professionals from across the nation.

“I hope you have learned as much from your professors and your studies as you have from your fellow students, especially those that have come from our allied and partner nations,” Davidson said. “Friendships made during schools such as NPS are the backbone of coordination, diplomatic and military to military relations … Each and every one of you now has an obligation to be part of the problem solving that the world is currently grappling with.

“This is why the Naval Postgraduate School exists, it is why the Unites States Navy and leaders like me support the institution, its research, its partnerships, and most importantly its students,” she stressed.

In concluding her remarks, Davidson urged the students to bring their new ideas and innovative spirit to the front lines of their future assignments.

“Tomorrow’s global challenges require creative, bold, and globally-minded leaders. The most successful leaders will be those of you who can bring disparate tools and people together at all levels of our institutions,” she said. “Your efforts within your areas of study will undoubtedly contribute to the collective matrix of thought that improves processes, informs effective decision making, and encourages exploration and research … And so I ask you, what will you contribute to the discussion?”

Davidson assumed the role of Under Secretary of the Navy on March 22, 2016. During her military career as an Air Force pilot from 1988 to 1998, she flew combat support, airdrop and humanitarian air mobility missions in the C-130 and C-17 cargo aircraft, becoming the first female to fly the Air Force’s tactical C-130.

Her distinguished career also includes assignments as Deputy Assistant Secretary of Defense for Plans, and Director for Stability Operations Capabilities. She was also presidentially-appointed to the National Commission on the Structure of the Air Force.

The Naval Postgraduate School is the nation's premier, national-security focused graduate university. It has been offering defense-relevant graduate degrees since 1909, and has been operating continuously in Monterey, Calif., since 1942.