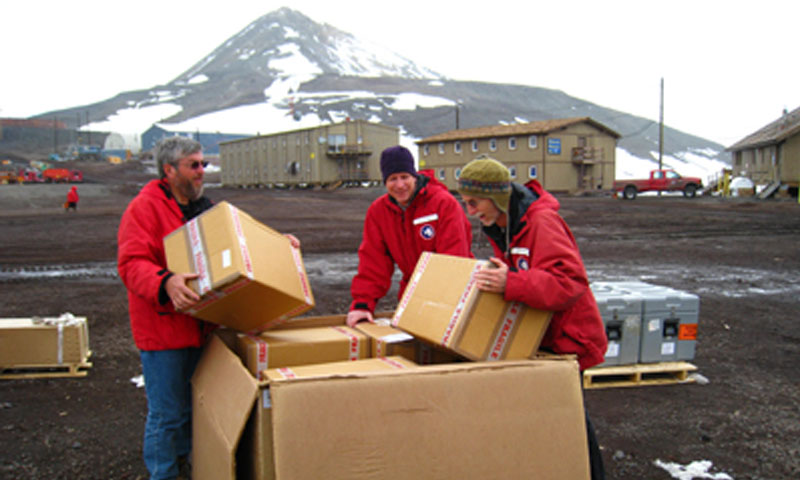 A team of NPS oceanographers is braving six weeks of frigid temperatures and gusty winds in Antarctica for the research opportunity of a lifetime.

The 10-man research team, comprised of researchers from three other universities and the National Aeronautics and Space Administration (NASA), has several important pieces of equipment in-tow, including three specially-designed research tools developed and built by Stanton and his team at NPS.

Five years ago the National Science Foundation called for research proposals for groups interested in deep field research in the Antarctic as components of the International Polar Year. Stanton, a longtime oceanographer and researcher, had already established a sound reputation in his 30+ years in the field, and numerous research trips to the Arctic for various projects meant that he experienced the unique environment.

Stanton and the NPS team took several years, and multiple Antarctic trips to perfect the tools that will transmit data back to computers on the NPS campus. NASA’s Robert Bindschadler, an emeritus glaciologist at NASA’s Goddard Space Flight Center and lead scientist for the PIG research trip, noted the value that Stanton and his NPS colleagues bring to the team.

“In short, our project would be going nowhere without the superb technical skills of Tim Stanton and his team,” Bindschadler noted. “The sub-ice-shelf environment into which we are hoping Tim’s novel and unique instrumentation is to be deployed will allow oceanographers and glaciologists to make a huge leap forward in the understanding of the critical interactions of water and ice along the underside of a major Antarctic ice shelf.”

In the ocean cavity below the glacier the research group is deploying instruments to measure the ocean circulation that is bringing slightly warm water across the continental shelf to the base of the ice shelf.  The interaction of the ocean with the ice shelf is melting the glacier, from below, at a rapid rate. The PIG ice shelf is an area of particular concern, selected because it is among the most rapidly melting ice masses in the world, moving seaward at a rate of 4km a year.

“The Pine Island Glacier ice sheet is fed by a massive glacial system up on the continent. It flows down and extends out in the ocean by about 50 km,” explained Stanton. “The glaciologists who have studied these systems for the last 25 years have noticed that the ice is moving two to four times more rapidly than it was in the past. And the glaciology numerical models suggest that the buttressing effect of the glacial tongue is being reduced rapidly and they hypothesize that that reduction of the extent of ice shelves is accelerating the ice flow down to the ocean.”

Stanton has made several trips to the Antarctic throughout his career, each time working to improve his equipment design and data collection methods. The NPS gear has been designed to fit down through the narrow, deep holes the group will be melting through the ice sheet specifically for this research project.  The equipment includes three main components: an Ocean Flux Profiler, a Fixed-Depth Ocean Flux package, and a surface infrastructure system. 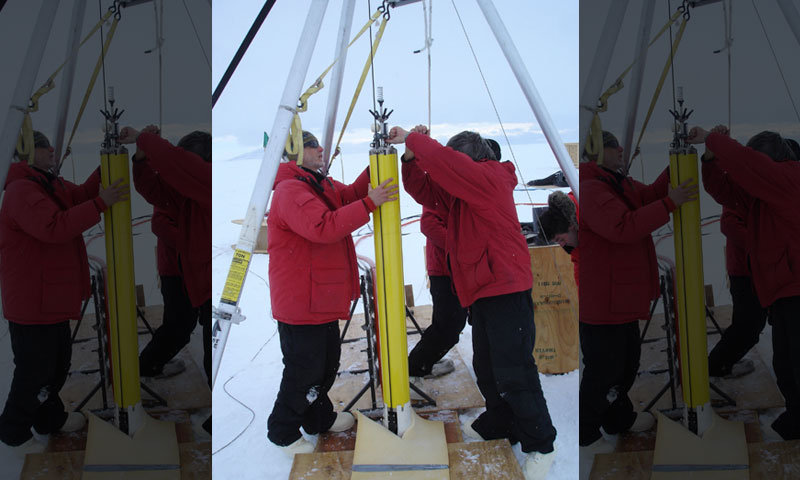 A team of researchers and NPS faculty practice lowering an ocean profiler into the ice shelf during a previous trip to Antarctica. The profiler is one of several pieces of equipment specially designed and built at NPS specifically for the current research trip.

The team will use a hot-water system to drill two 20cm diameter holes into the 500m thick ice shelf, where they will then lower the ocean flux profiler. The profiler has been specially designed to fit into the tiny hole, and once it reaches the underside of the glacier, it will be left in place to measure temperature, salinity and vector currents of the water flowing within the ocean cavity. The equipment has been developed over four years, and stood up in numerous tests both at NPS – a vertical tube fixed on the side of Spangle Hall serves as a test tunnel for the profilers—and in small-scale Antarctic experiments. The data gathered will ultimately give researchers a better understanding of the warm-water currents that carve channels and underneath the ice shelf and cause it to rapidly melt.

“The research will shed light on ocean processes acting over a wide range of time scales in a critical setting – below a melting glacier ice shelf,” explained Shaw. “Better understanding of ocean circulation and turbulence below Antarctic glaciers will be used to improve large-scale climate models.”

Scientists theorize that the warm water flowing in underneath the PIG ice shelf is the dominant cause of the rapid melting rate of the ice shelf. The Ocean Flux Profiler and Fixed-Depth Ocean Flux Package will transmit data back to NPS, where it can be analyzed and determine whether the currents and water temperatures are indeed increasing the melting rate of the ice, and at what rate.

“If a system like this starts to collapse, we could see massive sea level rise on decadal or century time-scales,” said Stanton. “So the question becomes at what time-scale might this happen and what are the physical processes that lead to that. And that’s what we are trying to study. So the whole objective is to try to take measurements and observations in this extraordinarily remote system that will allow us to better model that system and contribute to computer models that help predict what might happen in the future.”

Stanton noted that as with any extreme research trips, there is incredible potential for error. Weather conditions and the remote location mean that once they are stationed in their tents on the PIG, they are thousands of miles away from civilization. Any broken equipment or unexpected problems must be handled as well as possible by the 10-man team.

“It’s very remote. There’s no corner store, nowhere to go buy a resister or something,” Stanton explained. “We have to rely on things working. One good thing about designing everything is that you know how to fix it. But there are some things you just can’t fix. It doesn’t take much to kill the whole system.”

To prepare for the harsh weather and remote working conditions Stanton and the team will go through extensive training upon arriving at McMurdo Station, their first stop on the way to their final, remote destination on PIG. McMurdo is a U.S. Arctic research center in Antarctica, about 1,800 miles from the ice shelf they will call home for the six weeks. The station will be their last chance to enjoy creature comforts – such as showers and indoor sleeping arrangements. In their six weeks on PIG, the team will sleep in small mountain tents, exposed to winds that often exceed 60 mph.

But in spite of the harsh conditions, the team is happy to finally get the chance to see their equipment in action, and look forward to the potential understanding that researchers can get from the data gathered. The team expects that several NPS students will be active in analyzing the data, possibly using it in theses, once it starts transmitting back to Monterey. 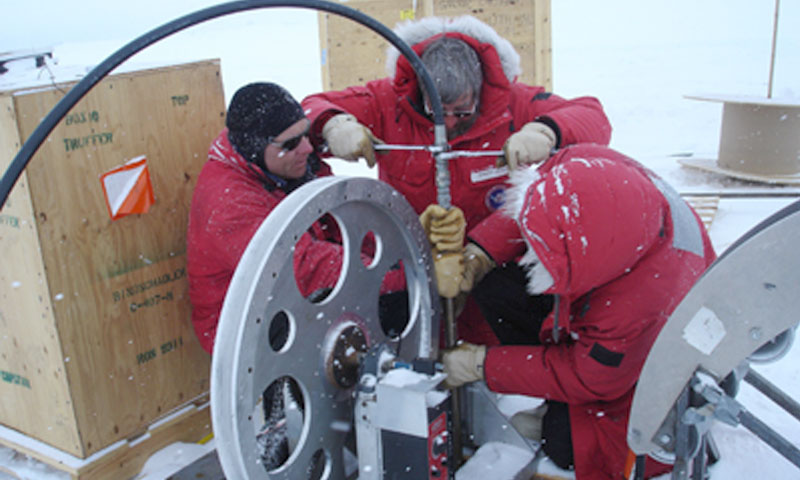 NPS Research Professor of Oceanography Tim Stanton, right, helps fellow researchers test the hot-water drill that will be used to create a tunnel for the ocean profiler. The researchers have made several trips to Antarctica to test the equipment in preparation for their current research trip, which will run from the end of Nov. through the end of Jan.

“It has been an interesting experience being involved in this project,” said Stockel. “We have put a tremendous amount of time and energy into preparing for this opportunity and now we have our chance to try to pull it off. It is the culmination of five years of preparation and there is a lot riding on it, so there is a certain level of pressure to make everything work so we can collect useful data to further our limited understanding of this area of the ocean.”

Stanton noted that there will certainly be interest from the Navy in the Antarctic findings, as the maritime domain is directly impacted by potential melting of the planet’s ice sheets and resulting sea-level rise. This sea level rises has wide impacts on ports, coastal cities and low lying farming land around the world.

“The Office of Naval Research has reinstated their high-latitude research program because the massive changes in the amount of summer time ice cover in the western Arctic has changed the whole accessibility of the central Arctic, for shipping, geopolitics and exploitation of resources,” explained Stanton. “So suddenly there’s going to be a lot more activity up there, particularly in the summer, by all of the nations surrounding the Arctic. So the Navy recognizes that’s something they have to be aware of and defend.”