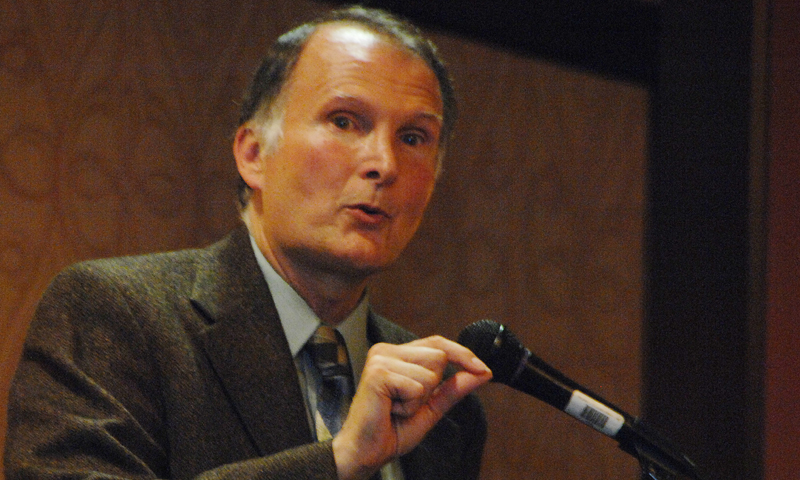 NPS Professor and Chair of Defense Analysis, Dr. John Arquilla, offers a keynote lecture titled “Just and Unjust Cyber Wars” for an ethics in emerging technologies workshop held at the nearby Marriott Hotel in Monterey, Calif., August 2-4. Arquilla focused on the many challenging ethical questions in cyber warfare.

Attendees at the Consortium for Emerging Technologies, Military Operations and National Security (CETMONS) gathered for a three-day workshop titled “Ethics and Warfighting Technologies,” held at the nearby Marriott Hotel in Monterey from August 2-4.

Participants from the military, DoD and leading universities around the country gathered to share ideas, explore research topics of interest, and hear presentations and briefings from NPS faculty.

“Over the past several years, there has been a great deal of public anxiety over military uses of emerging technologies, especially in the fields of robotics and cyber warfare,” explained Dr. George Lucas, Professor of Ethics and Public Policy in the Naval Postgraduate School’s (NPS) Graduate School of Business and Public Policy (GSBPP) – Lucas also served as the workshop’s organizer. “This workshop is an integral part of a national dialogue among scientists, engineers, military and civilian policy leaders, and people working in the fields of ethics and international law, aiming to work together to address that anxiety through careful reflection on the moral and legal implications of these new technologies.”

With ethics being a key area of focus for the event, keynote speaker, NPS Professor and Chair of Defense Analysis, Dr. John Arquilla, gave a lecture titled “Just and Unjust Cyber Wars,” in which he acknowledged that cyber warfare brings up many ethical challenges, for which there are no simple answers.

“I applaud the work you do here,” Arquilla said in his opening remarks. “This is very important. And I am pleased that there are ethicists here with technologists. It is truly the only way ahead … We’re at a point where advanced militaries are both empowered and imperiled by advanced technologies.”

One of the issues Arquilla touched upon was proportional force. He explained that retaliation for an attack should be proportionate to the damage done, and should be carried out with due authority. One of the problems with authority for the cyber domain is that it is often difficult, if not impossible, to identify who carried out an attack.

Members of the workshop asked questions of Arquilla, related to the difference between warfare in the cyber domain and warfare on the battlefield, and where the two intersect. He noted that cyber warfare may be appealing because of the fact that it can be fought without fatalities on the battlefield.

“We have the ability to intrude upon another nation’s sovereignty without having to engage other forces,” said Arquilla, “and to strike directly at the targets we seek.”

Also representing NPS at the event was Jeff Kline, Director of the Consortium of Robotics and Unmanned Systems Education and Research (CRUSER), who offered an overview of the efforts CRUSER is making in bringing together the various departments of NPS in unmanned systems research.

He explained how ethics plays into the unmanned systems research at NPS, where faculty with expertise in ethics offer guidance to students and peers to help address any ethical questions.

Director of the Undersea Warfare Research Center Jerry Ellis and Associate Professor of Applied Science Don Brutzman also spoke about unmanned systems and the collaborative wargames being developed at NPS. 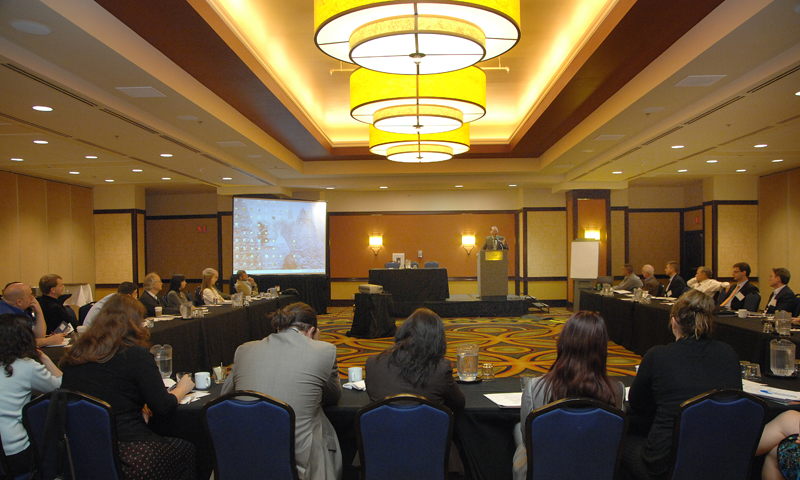 Participants at the Consortium for Emerging Technologies, Military Operations and National Security Workshop engage with NPS faculty speakers at the three-day event. The workshop brought together military, DoD and university partners to discuss ethics and emerging defense technologies.

CETMONS provides engineers, scientists and ethics professionals an environment to discuss current challenges and opportunities in defense technologies. The workshop offered a collaborative environment for scientists, engineers and ethicists from around the country to share their expertise, and learn more about the kind of work being done at NPS.

“Whatever knowledge we have of the information age of conflict is not something that springs from one or even a few minds,” said Arquilla. “It is a generation of scholars, some of whom I see in this room. We are, I think, pioneering a kind of group intelligence, which is one of the most exciting things about the emerging technologies of our time.

“We collaborate in ways that I don’t think academics were able to do a century ago or even fifty years ago,” he continued, “and I am very excited to see the pace at which knowledge begins to expand. In particular, in our academic community where students from all of the services and around the world come together to talk about these difficult subjects of war and peace and society and security.”

Lucas echoed the sentiment, noting the value of having a discussion centered around ethics and technology, with the participation of some of NPS’ experienced faculty.

“It is important that we continue to collaborate with colleagues across disciplines and institutions in determining, not just what we cannot or should not do,” explained Lucas, “but even more importantly what we should do, and must do, in order to ensure the continued security of our nation and the international community, with the least risk, destruction, and loss of life possible.”