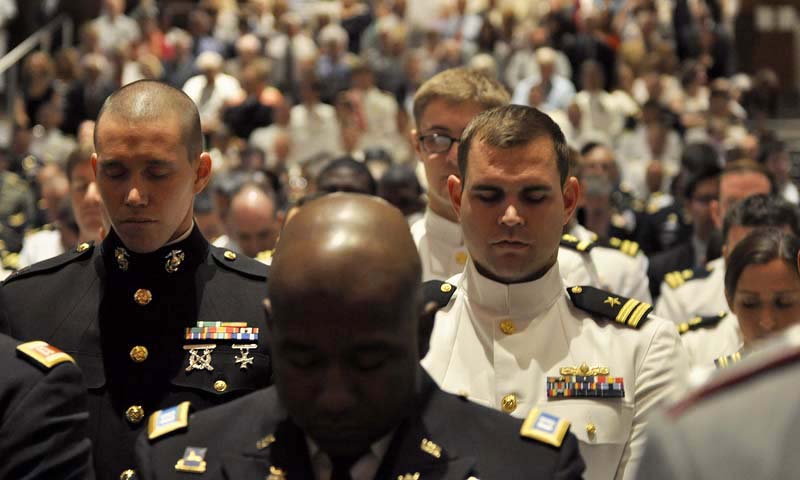 Naval Postgraduate School graduates bow their heads during the invocation for the Spring Quarter graduation ceremony in King Auditorium, June 21. More than 300 graduates earned their advanced degrees during the ceremony.

Alexander, an NPS alumnus who holds two advanced degrees from NPS, was inducted into the prestigious NPS Hall of Fame prior to offering the keynote address.

“Today, we have the privilege of welcoming back one of NPS’ most distinguished alumni, not only in service as our keynote speaker for today’s ceremony, but for induction into our prestigious Hall of Fame as well,” said Tighe. “I can tell you from personal experience, Gen. Keith Alexander serves our nation with incredible distinction, and he has personally influenced my career in a profound way.”

Tighe worked directly for Alexander for five years, a year of which was served as his executive aide. Alexander returned his own gratitude to Tighe for her service to NPS, then commented in jest on his induction to the Hall of Fame.

“I was surprised that I received this honor, until I realized that it was awarded alphabetically,” Alexander quipped.

Cybercom’s chief then delivered a short but poignant commencement speech. Much of his address was focused on Gen. Douglas McArthur’s famed, “Duty, Honor, Country” speech given to member’s of Alexander’s other alma mater, the U.S. Military Academy at West Point.

“Duty, honor, country … Those three hallowed words reverently dictate what you ought to be, what you can be, what you will be. They are your rallying points to build courage when courage seems to fail, to regain faith when there seems to be little cause for faith, to create hope when hope becomes forlorn,” quoted Alexander.

Alexander also spoke of the ability of WWII era intelligence officers to break the German code that had previously defied intelligence experts throughout the war.

“During WWII we had the ability to break an ‘enigma.’ Everyone thought it was impossible, but nine months later we break the code and changed the course of the war,” said Alexander.

Drawing upon that famed accomplishment, Alexander emphasized that it was up to the current generation, including those in attendance at the ceremony, to carry the gauntlet forward and create a more secure world through technical innovation and education.

“You are the leaders that will lead us into a new world,” said Alexander. “We cannot do that without people that are educated at your level. You have the knowledge necessary to change our world for good.”

Alexander pointed to several examples of innovation born of advanced technical studies that have led to major breakthroughs since his initial attendance at NPS in the 80s, notably, the adoption of advanced network technologies that led to the creation of the Internet as we know it today.

Finally, Alexander thanked the graduating class for their contribution to their respective nations’ defense with an eye to their future accomplishments.

“Thank you for what you have done for the security of our nation and what you will do in the future,” said Alexander.

A moment of special recognition near the beginning of the ceremony was held in honor of U.S. Marine Corps Maj. Francisco Rodriguez. Rodriguez completed his degree requirements before   passing away earlier this year after a long battle with cancer.

“I would like to express my condolences to the Rodriguez family,” said Alexander. “He was a great Marine, patriot and American, he will be deeply missed.”

Rodriguez’s daughters received their father’s degree posthumously on behalf of the Rodriguez family to a standing ovation from the assembled students, families and faculty in attendance.

Some 306 graduates earning 309 degrees from a host of defense-related disciplines crossed the stage during the quarterly ceremony. NPS educates a diverse student body of officers and select civilians drawn from all U.S. uniformed services, DOD and 40-plus allied and partner nations.