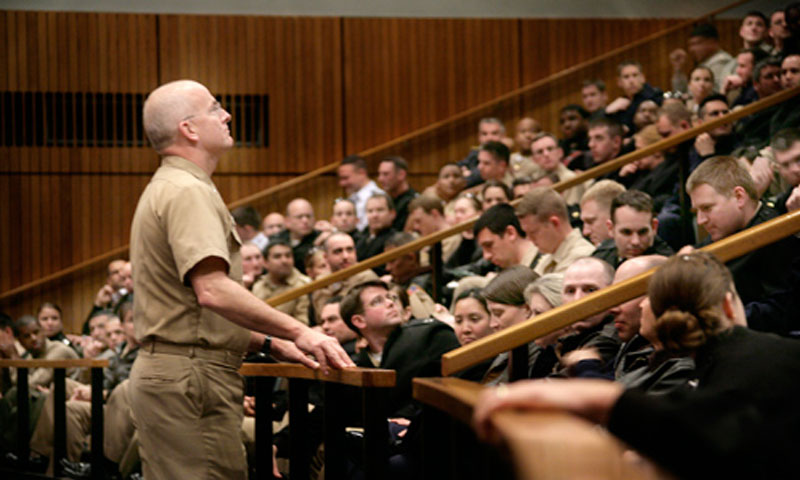 Former Naval Postgraduate School Dean of Students Capt. Alan “Dex” Poindexter fields a student’s question during an all-hands in King Auditorium on the university campus. On July 1, a tragic accident claimed the life of the senior Naval officer and primary mentor to NPS’ more than 1,500 resident students.

On Sunday, July 1, a tragic accident off the coast of Pensacola, Fla., claimed the life of Naval Postgraduate School Dean of Students and Executive Director of Programs Capt. Alan “Dex” Poindexter.

Poindexter, a 1995 aeronautical engineering graduate from NPS, came to the university following a long, distinguished career with the Navy and NASA as a pilot, shuttle astronaut and executive. Poindexter was a participant in two shuttle missions, and in fact commanded one of the final flights of the space shuttle Discovery in April 2010 prior to the program’s official retirement just over a year later.

“Dex was not just the senior Naval officer here at NPS, he was an accomplished man of extraordinary character, a devoted husband and father, and a true professional – precisely the kind of man that could serve as a true mentor to all of our students,” said NPS President Dan Oliver.

“Our student body consists of countless men and women who all have one thing in common – the responsibility to lead in their respective services and communities,” Oliver continued. “It takes a special kind of individual to command the respect of these students – Dex was that kind of man. Our deepest sympathies are extended to his wife, Lisa, and their two sons.”

As Dean of Students, Poindexter took quite personally the welfare of his students, and the value of the education delivered to them. His well-known open door policy brought students of every flavor into his office where memoirs of an accomplished pilot and space traveler adorned every wall and nook.

He reinvigorated the Secretary of the Navy guest lecture program, bringing countless senior leaders throughout DOD, government, industry and more to address the NPS student body with challenging ideas, enriching their exposure to compelling thought-leaders beyond the classroom.

“Dex understood what it meant to attend this university, and the role his own degree played in his success as an astronaut, and as a Naval officer. He wanted that same success for every student that crossed his path, and he pursued that ideal with an unending and enviable passion,” said Dr. Leonard Ferrari, NPS Executive Vice President and Provost.

“Capt. Poindexter was so uniquely impressive, it was impossible not to love the guy – and as I have seen over the last year, and the last few days, there are literally hundreds and hundreds of people who share this impression of him,” noted Vandersluis.

“He was funny and had an easy laugh. He was smart, modest and kind. He had a zest for life that was contagious,” he continued. “I will take many of the things I observed about Dex during our cut-short friendship and incorporate them into my professional and personal life. He was truly the best of the best and I am much, much better for having had the honor of his leadership, his confidence and most of all his friendship. He will be missed, but my guess is that he will not be easily forgotten.”

While the campus mourns the tragic loss of one of its most senior leaders, Oliver offered one additional note – perhaps a summation of the collective hope of the entire Naval Postgraduate School community, as students, faculty and staff attempt to move forward with their studies and responsibilities.

“As one of only a select few men and women to journey into the vastness of space, to look down upon the entirety of our Earth and to see it for the immense beauty it represents, I can only hope he is looking down upon us again, just one last time,” Oliver said.