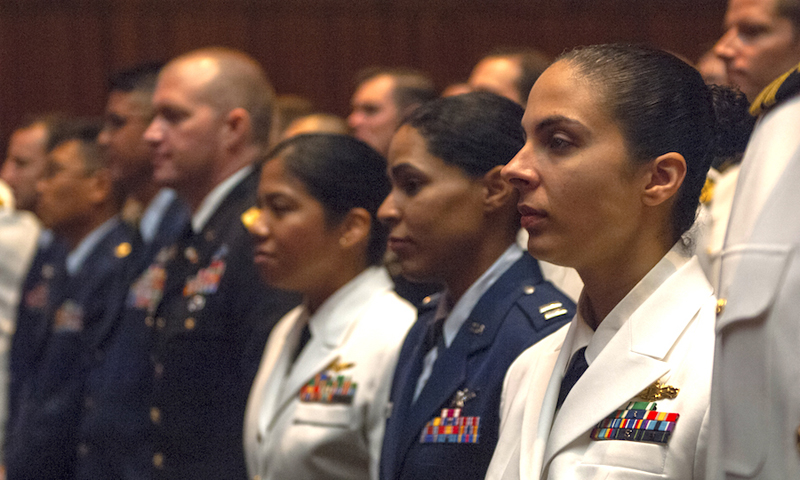 The Naval Postgraduate School (NPS) bid farewell to 384 graduating students from every branch of military service, including 28 foreign officers from 10 nations, earning 387 graduate degrees, during the Summer Quarter Commencement Ceremony in the university’s King Auditorium, Sept. 23.

Also recognized were NPS Department of Mechanical and Aerospace Engineering Professor I. Michael Ross and Department of Physics Professor Gamani Karunasiri, both of which were honored with the elite “distinguished professor” designation.

NPS School of International Graduate Studies Dean Dr. Jim Wirtz presided over the ceremony. He congratulated the assembled graduates and thanked faculty and loved ones in attendance for their support before inviting guest speaker Dr. Steven R. Lerman, recently named NPS Provost and Academic Dean, to the podium.

“Let me first congratulate each of today’s graduates. You’ve worked hard to arrive at this celebration, and you should be very proud,” said Lerman.

In Lerman’s first formal address to the NPS community, he focused on what he calls “four key, transformational elements” that he believes have changed society for the better – legitimate governance, innovation, effective collaboration, and the one element that he argues allows the others to work, education.

“Whether there is a constitution or some other body of common law, having a widely-accepted set of rules and procedures that is seen by the vast majority of citizens as reflecting the legitimate will of the people is an essential element for societal success,” said Lerman.

“It is no accident that all of us who serve the United States in any branch of our nation’s government, from the commander-in-chief down, take an oath ‘to preserve, protect and defend’ the constitution. Our allegiance is not to a piece of soil or a particular individual leader, but to the set of rules by which we govern ourselves,” he continued.

In Lerman’s view, legitimate governance founded on laws that reflect the will of the governed create the conditions by which his second transformational element can be achieved, innovation.

“It is the process of scientific discovery, leading to invention, leading to widespread application, that has moved much of humanity from subsistence agriculture to a fully-developed, industrial economy,” explained Lerman. “In general, societies that innovate, thrive. Those that don't, fail.”

Lerman’s third transformational element is one that he describes as “less widely acknowledged or accepted … but nevertheless significant.” He contends that the transformative element of effective collaboration can be measured by a society’s ability to ensure and embrace diversity.

“Successful societies have legal and social mechanisms for taking advantage of diversity. The societies that have thrived in recent times, and will thrive in the future, all find ways to bring together people who come from diverse backgrounds and have different world views to work towards shared ends,” Lerman said. “Societies that fail to do this risk becoming paralyzed by their inability to create a workable consensus. Even worse, they may fragment entirely, sometimes with violent, chaotic results.”

Finally, Lerman demonstrated the means by which education makes the various transformative elements possible, noting that all of them rely upon an educated populace that is capable of making informed decisions about leadership and policies.

“It is precisely the type of education you have received here at NPS that enables the three positive forces – legitimate rule of law, innovation, and collaboration of diverse individuals – to work effectively,” Lerman said. “Education provides the foundation upon which all else rests. No society can truly succeed unless it effectively educates its population. The faculty and staff of NPS are deeply committed to the idea that the education we provide is part of what makes legitimate governance, innovation and effective collaboration work,” said Lerman.