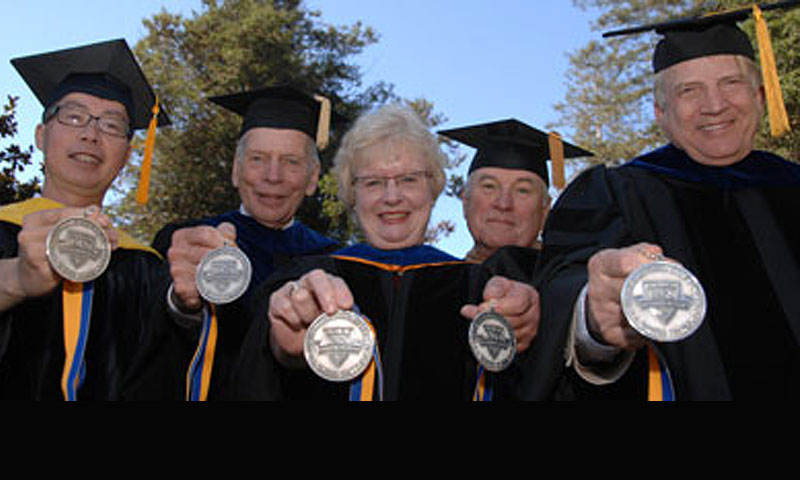 “The title of Distinguished Professor is an honorary title conferred upon a small number of NPS faculty in recognition of the exceptional and sustained scholarly accomplishments that they have made, and continue to make,” noted NPS Executive Vice President and Provost, Leonard Ferrari in a memorandum announcing the recipients.

The professors were formally recognized during the quarterly graduation ceremony, with a silver medal presented by NPS President Dan Oliver in front of all the attending faculty, students, staff and friends and family members. The medal is to be worn with all of their academic regalia and they are entitled to use the academic title of Distinguished Professor.

“I am very honored to receive this title and to join the ranks of NPS colleagues who have been awarded this title. I thank my colleagues at NPS and elsewhere who contributed to the case for awarding me this,” said Distinguished Professor of Operations Research Patricia A. Jacobs.

“Among graduate schools, NPS is notable for its student body of career U.S. and international military officers and Department of Defense employees,” she continued, and “for its research emphasis on problems in defense and national security. It is a privilege to work with the students and my colleagues on these problems of national importance.”

Distinguished Professor Young W. Kwon was away on temporary duty and was not able to attend the ceremony, but noted he would proudly don his medal during subsequent ceremonies.

“I am honored with the title,” said Kwon, a member of the Department of Mechanical and Aerospace Engineering in the Graduate School of Engineering and Applied Sciences (GSEAS). “I am also very happy to see that my contribution to NPS and Navy/DoD has been recognized. Recognition and appreciation are important to boost the morale in the workplace.”