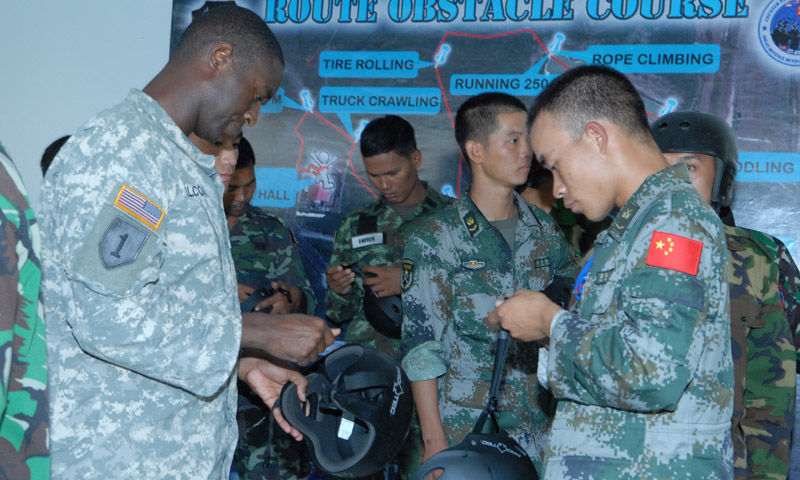 U.S. and international service members prepare for an obstacle course during an unprecedented 18-nation counterterrorism exercise conducted under the auspices of the Association of Southeast Asian Nations (ASEAN) member states. NPS’ Center for Civil-Military Relations played a key role in developing the exercise, helping the various stakeholders migrate to a more transnational approach to combating terrorism. (Photo courtesy NPS Center for Civil-Military Relations)

Students and faculty at the Naval Postgraduate School’s (NPS) Center for Civil-Military Relations (CCMR) recently completed a three-year effort to lead an unprecedented 18-nation counterterrorism exercise conducted under the auspices of the Association of Southeast Asian Nations (ASEAN) states at the Indonesian Peace and Security Center located in Sentul, Indonesia.

The exercise was born of the 2010 inaugural meeting of the ASEAN Defense Ministers Meeting (ADMM) held in Hanoi, Vietnam. Participants were drawn from an elite group of ministers from the ten ASEAN member states – Brunei, Cambodia, Indonesia, Laos, Malaysia, Myanmar, the Philippines, Singapore, Thailand and Vietnam – and the eight partnered or “plus” nations – Australia, China, India, Japan, New Zealand, Russia, South Korea and the U.S.

U.S. Secretary of Defense Chuck Hagel addressed the second iteration of the ADMM Plus Defense Minsters Meeting in Brunei prior to the commencement of the ADMM Plus EWG 2013 Counter Terrorism Exercise (CTX), where he reaffirmed the U.S. commitment to the ASEAN Plus process.

“Working together develops regional capacity and the habits of cooperation we need to solve today’s complex problems,” said Hagel. “Exercising together builds trust and understanding that reduces the risk of conflict when disputes arise.”

Hagel also acknowledged the multi-year planning effort that led up to the CTX as a tangible example of the U.S.’s commitment to regional security.

“The exercise involved 872 military and civilian personnel from all 18 ASEAN Plus countries and was the first to be conducted under the auspices of the ADMM-Plus EWG-CT,” said CCMR Deputy Counter Terrorism Program Director retired Navy Capt. Tim Doorey.

“The long-term goal of the exercise was to have a common regional procedure in tackling transnational terrorism,” added Indonesian Armed Forces Commander Gen. Moeldoko.

Doorey noted the strategic and economic importance of the ASEAN Plus member states taking part in the exercise.

“More people live inside ADMM-Plus countries than the rest of the world combined, and more than half of the world’s GDP resides in these 18 nations,” said Doorey.

CCMR involvement in the exercise dates back to Feb. 2012, when the Deputy Assistant Secretary of Defense – Special Operations and Low Intensity Conflict, approached CCMR for assistance in the preparation of a series of realistic scenarios and the creation of a strategic-level Table Top Exercise (TTX) designed to help ASEAN members states to improve multinational, regional responses to terrorist threats in Southeast Asia.

“The decision was made to have a two-year program leading to a major exercise. We were tasked to come up with scenarios that were designed to force regional cooperation,” said Doorey.

“Counterterrorism is generally treated as a national or law enforcement issue. We wanted to show through realistic scenarios that there are many areas where unilateral, or even bi-lateral, responses to terrorism would likely fail and demonstrated the utility of a multinational effort to eradicate this problem,” continued Doorey.

Research into counterterrorism is one of the core areas that CCMR has been addressing since its inception in 2002.

“The CCMR’s mission is to build partner capacity and to improve interagency and international coordination and cooperation by addressing civil military challenges which include, amongst other things, combating terrorism,” said CCMR Combating Terrorism Program Manager Paul Shemella.

CCMR-developed counterterrorism scenarios were pitted against four multinational working groups tasked with addressing a major maritime threat against a liquefied natural gas facility or tanker, an attack against a major regional athletic and cultural event with global attendance, and the threat of a Man-Portable Air Defense Systems (MANPADS) in the hands of a sophisticated regional terrorist organization was injected on the last day of the exercise.

“The TTX was very strategic in nature, we looked at the long range work that needs to be done in response to terrorism and piracy,” said former NPS Superintendent and CCMR Strategic Communications Specialist, retired Rear Adm. Richard Wells. “The answer to dealing with terrorism is a strategic planning process which includes communicating, building infrastructure, and training together to deal with terrorism.”

Organizers strategically placed members of key regional states together in an effort to foster both formal and informal relationships with the potential to persist long after the completion of the exercise.

“In my group we had Singapore, China, Cambodia and Brunei working together. The idea was to get all of these nations, from diverse cultures and philosophies, working together at the same table for a common goal. The results were astounding,” said Wells. “There was no nationalism; the exercise facilitated serious, regional discussion about the common enemy of terrorism.”

As the tabletop working groups grappled with counterterrorism strategy and policy, personnel from member states participated in a practical exercise led by members of Special Operations Command – Pacific. The practical exercise consisted of field exercises and classroom events wherein junior officers and senior enlisted facilitators were exposed to a wide ranging series of topics including IED threat analysis, best practices and anti-terrorism procedures.

“The goal of the practical exercises was to develop counterterrorism capabilities by exchanging best practices and demonstrating the counterterrorism tactics, techniques and procedures among military forces in support of law enforcement and other designated government agencies,” said Doorey. 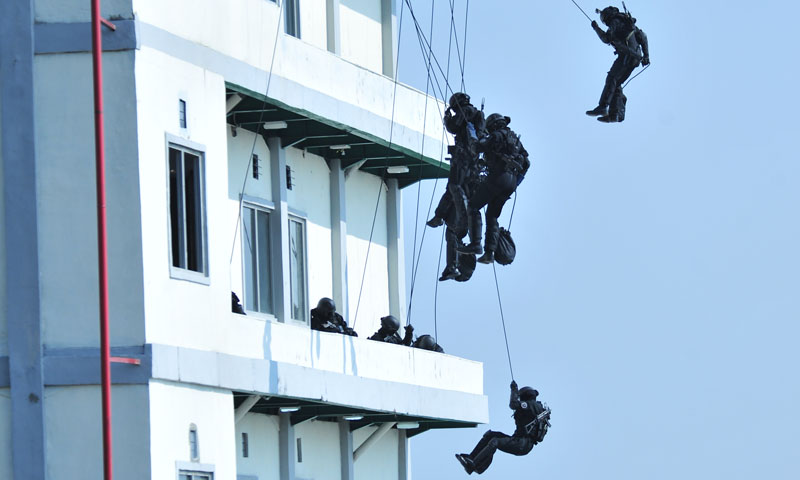 Members of an elite Indonesian counterterrorism group repel down the front of a building during a multinational counterterrorism exercise in Sentul, Indonesia. NPS’ Center for Civil-Military Relations played a lead role in designing the exercise, helping develop regional capacity through a multinational approach to combating terrorism. (Photo courtesy NPS Center for Civil-Military Relations)

“From my perspective, the ASEAN goal was met with the complexity of bringing 12 different countries under an umbrella of combating a common threat and achieving the same goals for the first time,” said U.S. Army Sgt. 1st Class Kindu E. Delaleu with the Asia-Pacific Counter IED (improvised explosive device) Fusion Center.

“Our role from the Asia-Pacific Counter IED Fusion Center was to provide a baseline of counter IED material for the participants, provide an IED threat brief related to the [U.S. Pacific Command] region, display replicate IEDs used in and around the Pacific realm and blend these teams to use their tactics, techniques and procedures to maneuver through several lanes with devices emplaced,” continued Delaleu.

“Many of the participants from partnered nation teams stated that they had not received this type of familiarization before and requested additional material. I feel the exercise was a great success and spearheaded the way for future counterterrorism exercises in the Asia-Pacific region,” he added.

While much of the exercise focused on law enforcement and military responses to regional terrorist threats, considerable attention was also given to attacking the root causes of terrorism and to de-radicalization programs.

“Research and prevention were a main focus of the tabletop exercises. Organizers and participants explored the roots causes of terrorism and sought solutions that could address the issue without causing harm to civilian populations,” said Wells.

Indonesia has a robust, national-police-led counterterrorism effort, but Indonesian leaders acknowledge that force alone will not stop terrorism from occurring and that deterrence must coincide with an on-going commitment to democratic values, freedom of speech, and freedom of assembly.

“Our initiatives and activities range from working with former terrorists – the re-education and rehabilitation of ex-convicts and their families; the empowerment of religious education institutions; and, the enhancement of awareness in schools – to engagement with the media to generate counter-narratives against radical terrorists,” said Retired Indonesian Inspector General Ansyaad Mbai, Director of the Indonesian National Counter-Terrorism Agency (BNPT).

The BNPT is also working with non-governmental and religious organizations to combat extremist-led radicalization efforts by targeting prisons, places of worship, and schools and the media. The Indonesian approach was born of the realization that, within the Indonesian context, kinetic operations were often counter-productive.

“The more physical pressure brought to bear upon them [terrorists], the more militant and radical they become,” said Mbai.

As Indonesia, U.S. three-year co-chairmanship of the EWG-CT comes to a close, preparation for the second iteration of exercises and multinational counterterrorism efforts are already underway.

Singapore and Australia will assume co-chairmanship for the EWG-CT in April of 2014.