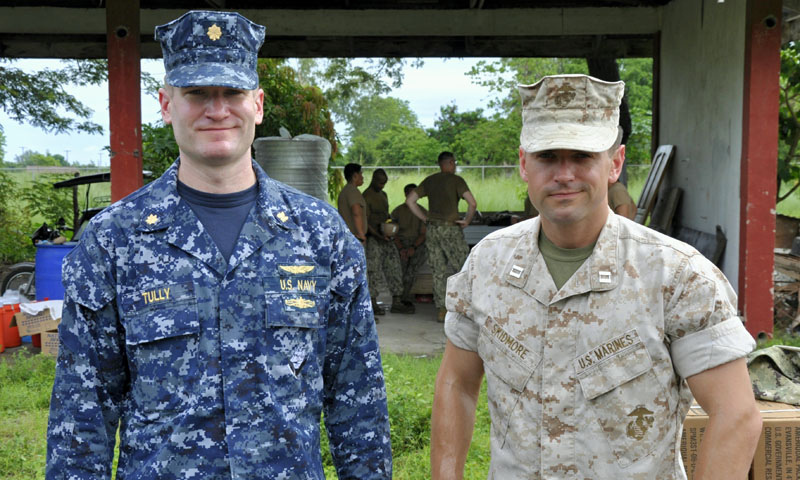 When the Naval Expeditionary Combat Command (NECC) needed to assess the overall cost-effectiveness of a cold-formed steel mobile factory for Navy applications in a real-world environment, they turned to Naval Postgraduate School (NPS) Department of Information Sciences Lecturer Brian Steckler and two students from the Graduate School of Business and Public Policy. Steckler and his students responded, traveling to Southeast Asia during the Cooperation Afloat Readiness and Training (CARAT) operations to perform a comprehensive financial and business case assessment that put the system to the test.

If cost-effective, the advantages of using cold-formed steel in humanitarian assistance and disaster response (HADR) or expeditionary missions over pure lumber or concrete seemed clear, and could be the solution that brings the Naval Construction Forces into the 21st century.

“We are interested in showing the full potential of this machine and using it in a real-world environment, so that we are better prepared for the next disaster,” said Steckler, whose role as the Director of NPS’ Hastily Formed Networks Research Group has him involved in HADR research all over the world. “CARAT is designed to promote collaboration between nations for training and building relationships. Advancing our abilities in HADR while working with local military is doing just that.”

The NECC commissioned the systems engineering division of the NAVFAC Expeditionary Warfare Center out of Port Hueneme for systems requirements while NPS was asked to perform a cost benefit and business case analysis of the material and the mobile factory.

“We brought two NPS master’s students in, Marine Corps Capt. Kris Skidmore and Lt. Cmdr. David Tulley, to do cost benefit and business case analyses of using this device and material versus wood and concrete,” said Steckler. “Their study is one of the key components to us deciding if we consider buying six to eight of these devices and stationing them around the world.”

Tully is earning his Master of Business Administration with a concentration in Supply Chain Management while Skidmore is working on a Master of Science in Management.

“This is the culmination of my NPS studies, and it applies all the academic principles that I learned at NPS to a real-world scenario,” said Skidmore. “We look to compare [cold-formed steel] to wood frame and cement block construction and asked the question, ‘Does this system provide added benefit for the Seabees?’”

Skidmore says that by traveling to the Philippines he is able to see first-hand how users interface with the system and its associated equipment.

“In these times of fiscal austerity, it is important to provide our decision makers with objective and dispassionate analyses,” said Skidmore. “That’s one of the greatest things I have taken away from the Naval Postgraduate School is approaching each topic or project with an open mind.”

Tully also sees an important advantage to the first-hand assessment. “Actually experiencing and evaluating the process in a real-world environment is an extremely valuable part of my education at NPS,” he said.

The cold-formed steel mobile factory is advanced construction technology, on the go. The transportable machinery utilizes galvanized cold-formed steel in a five-foot by sixteen-inch coiled roll weighing approximately 5,000 pounds. These rolls are available in most parts of the world, and their compact size makes them ideal for transport.

“In areas where materials are difficult to gather, this machine is invaluable,” said Steckler. “One roll can produce a 16-by-32 foot building. Concrete would take a 20-foot Conex box to create the same building. And wood is very bulky, heavy, susceptible to the elements, and hard to get in many countries.”

The mobile factory creates two-by-four building framing materials through a customizable software program. Each two-by-four can have lip cuts, dimples for screws, service holes for electrical wires, or screw holes for assembly. The machine then folds the sides of the flat steel to make a ‘c’ channel, labels each piece as a wall or truss and where in the wall or truss it will fit, and finishes by cutting out the desired length.

The Navy Mobile Construction Battalion (NMCB) One from Gulfport, Mississippi, currently deployed to Okinawa, Japan, was authorized to receive training with the machine and began field-testing during the CARAT operations. The assessment of the machine took place in Thailand, Malaysia and the Philippines.

“The Seabees brought everything with them on the USS Ashland,” described Steckler. “The machine, the equipment, the personnel, the food, water and life support, and the cold-formed steel. The LCAC brought everything from the sea to the shore, and then it was loaded onto trucks, which delivered everything to the location.”

While transporting the machine to the location was assessed during this exercise, other modes of operation have been considered, such as printing the materials at sea and delivering by ship or aircraft to location. Another is to bring the machine ashore and print at a centralized location.

Retired Chief Utilitiesman Rickey Harris was assigned as a program manager for the assessment of the mobile factory by (NECC). He worked directly with the Seabees through all evolutions of the mission and provides insight to the early evaluations of the benefits of using cold-formed steel and the machine.

“Before for the Seabees everything was lumber,” said Harris. “The problem with the local lumber is that three quarters would be no good. Either it’s too green and it bows and twists or it’s too dry and would need to be replaced in a short period of time if we used it. A job that would estimate three weeks would take more than a month just gathering materials.

“With cold formed steel everything is right there on site,” continued Harris. “No matter what size building, if we need to improvise or change something its all right there at our finger tips through the computer software. We do a lot of jobs that people want and we have been using Flintstone technology to do Jetsons work. It brings the Seabees into the 21st Century.”

BU3 Mykael Landstorfer was assigned to NMCB One as a Crew Leader during the CARAT operations.

“Normally we work for a ten percent waste factor and when the mobile factory is up and running we are at less than one percent,” said Landstofer. “Also, the construction process is much easier the building is laid out in the software, and it should only take minutes to spit out as opposed to days. It would take a week to do the same project with lumber or concrete, this is a day or less to put up the framing of a building.”

“The Seabees were very excited about being able to do this evaluation project from the very beginning,” said Steckler. “They have a great attitude, they are fast learners, and they are technically savvy. This is a computer-aided machine, essentially a 3D printer for printing building framing, which takes a level of sophistication to operate and to learn how to operate the machine and the software.”

The opportunity to advance the Seabees capabilities was initiated with the 2009 Naval Energy Forum where the Secretary of the Navy Ray Mabus set energy goals for the entire Navy to reduce energy consumption and increase energy efficiency. NECC Force Strategy Commander David Miano was thereby tasked with finding a way to meet the SECNAV’s mandate.

“The expeditionary forces are to reduce waste by 15 percent, and find efficiency of 15 percent by 2020,” said Miano. “So far, the preliminary analysis estimates a potential two-thirds time and one-half crew size in reductions. We will be saving time on station and we will be saving energy.”

“Market survey and capability gap analysis indicated that, in many places, materials were of low quality or inaccessible, production would be stopped, or sites would need to be revisited, which costs time and money,” continued Miano. “We started looking at using light-gauge steel construction. Based on past performance of private industry and commercial off the shelf items, we commenced a study to meet the current needs and projecting future needs of the Naval Construction forces.”