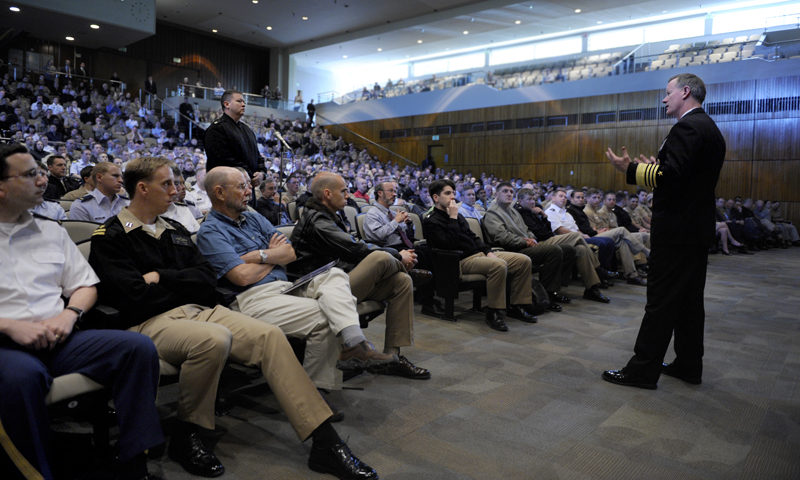 At the opening of his SGL, McRaven took a moment to honor a member of the NPS Defense Analysis (DA) department who, as he noted, has contributed significantly to the USSOCOM mission, in addition to helping the SOLIC curriculum thrive and evolve. He presented DA Professor Dr. Gordon McCormick with the USSOCOM Medal, an honor not frequently bestowed by the command.

“We established the Special Operations/Low Intensity Conflict curriculum about 20 years ago, now part of the Defense Analysis curriculum. Since that time, we have put over 900 students through that course,” McRaven said. “Those students are from the international community, from the enlisted community, from the officer community of all services, and have really shaped the future of U.S., and I think, international special operations.

“When we started, I’m not sure we felt that it would go too many years, but it just seemed to be the right thing to do at the right time,” McRaven continued. “And it went 20 years, frankly, because of one man. So today I would like to take the opportunity to recognize Dr. Gordon McCormick for his contributions not only to the curriculum here at the Naval Postgraduate School, but what Gordon has done has really shaped and influenced the U.S. Special Operations Command.”

With over 66,000 people under his command, McRaven knows firsthand the value of education, and the things that can emerge from good ideas and quality research. He referred to a time when he faced a challenging problem, but found solutions were easier having developed critical thinking skills in his time at NPS.

In his remarks following the award, McRaven spoke about the future of the Special Operations Forces (SOF), and the importance of strong leadership. McRaven noted that while the USSOCOM may be widely known for their direct action operations, there is much more to their mission than that. He noted that one of the challenges of being in his position is helping those outside of the U.S. government understand the role of the USSOCOM.

“The fact of the matter is that most of what we do in the special operations arena is on the indirect side. We are in 75 countries around the world today, building partnership capacity, allowing those countries to deal with their own security problems,” he noted. “So that frankly, we don’t have to be at the point where we are conducting raids. We’re looking to get to the point where the host nations can do their own thing.”

McRaven noted that although he considers the USSOCOM to be the strongest elite force the world has ever seen, when standing alongside members of the international SOF communities, they are all cut from the same cloth. And that, he said, should encourage cooperation and collaboration whenever possible.

He pointed to a recent international SOF conference, where something he has recognized many times was re-enforced once again … Special operators, no matter where they come from, simply have some core traits in common. And, he added, those commonalities should help USSOCOM develop one of their core initiatives in the SOF Vision 2020 initiative, building the global special operations forces network.

“If we are all kind of alike, how come we aren’t all talking together? How come we’re not taking the relationships that we have built, particularly in NATO and Afghanistan, and begin to look at those on a global scale?” he continued. “I will tell you the feedback that I got from folks was just tremendous. People that normally don’t work together are out there recognizing that we as a SOF enterprise can do great things globally if we partner, if we talk, if we communicate.”

McRaven noted that as valuable as missions and technologies are to USSOCOM, leadership is critical to making them successful. He pointed out four important things for military leaders of all services and ranks to remember – take care of the troops, lead from the front, take risks, and learn to fail. He also noted the importance of setting expectations of those one is leading.

“Nobody came into the service to be mediocre,” he said. “I can guarantee that.”

In recognition of his exceptional leadership and service, McRaven was presented an award himself at the end of his lecture. NPS President Dan Oliver honored him with the Distinguished Alumni Award, stating that, “As a significant contributor to the fields of national security affairs and special operations, your ingenuity, leadership and vision demonstrate the value of an NPS education.”

Later in the day, McRaven checked in with the DA department to hear from Chair, Dr. John Arquilla, Common Operational Research Environment (CORE) Lab Co-Director Army Col. Greg Wilson, and a number of DA students and faculty in a briefing about the department’s recent progress and ongoing projects.

“We made sure to let the Admiral know that the program he helped to create continues to thrive, educating new generations of special operators, information strategists, and network analysts,” Arquilla said.
Defense Analysis students, Lts. Deak Childress and John Taylor, presented their thesis research to McRaven, sharing with him a project that has merged intelligence with tactical-level operations to produce an app for mapping improvised explosive device (IED) networks based on the bombs’ signature components.

“The value for me was in tying the potential operational impact of our project together with Adm. McRaven’s comments as he was briefed on DA and CORE lab projects,” explained Childress. “Literally seconds before receiving our portion of the brief, the Admiral stated that the real value of CORE Lab efforts was in doing research and development that would impact operations, not just ‘science projects that brief well.’ Based on his feedback from our briefing, we are confident that he saw the value in what we are doing, and he understands perfectly well that IEDs are not going away anytime soon and will continue to threaten our forces wherever they find themselves operating.”