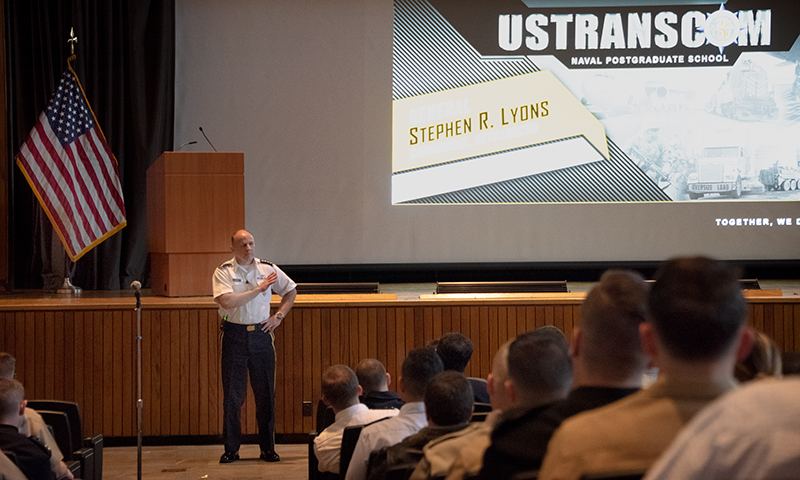 Beginning his remarks, Lyons recalled the value his NPS experience has provided throughout his career since graduating in 1993 with a master’s degree in logistics management.

“To this day, the tools I received at that particular time of my career are what I still keep in my toolbox today,” said Lyons. “I still think about complex problems using the set of tools that I walked out of here with 26 years ago.”

Since taking command of USTRANSCOM, Lyons underscored changes in the national security environment due to nations like China and Russia creating separate regional challenges that when combined affect logistics globally.

“In the past, [USTRANSCOM] had the luxury to operate and plan with impunity,” said Lyons. “Now there are discussions about contested environments to understand how the adversary looks at this strategic comparative advantage called power projection.”

Lyons then discussed several ideas on what the U.S. could do to project power.

The first idea was to highlight the U.S. military’s ability to project military power through trans-oceanic distances. Lyons noted that 85 percent of the joint force resides within the continental United States, and it will need to cross oceans to be deployed.

“This ability to project and essentially pick up something from a place like Cincinnati and move it trans-oceanic distances and establish combat power provides some very compelling effects,” said Lyons. “If it’s one thing in the Department of Defense that transcends everything, it’s a combat credible joint force that can meet our security objectives.”

Parallel to NPS’ drive to partner with the private industry for innovative and collaborative solutions,
Lyons’ asserted the Department of Defense (DoD) needs to be linking with related commercial industries. His reasoning is that in some cases, any risk to industry will also be a risk to the DOD.

“What people don’t realize is that there is an aspect of the commercial industry that’s an integrated part of the USTRANSCOM capacity,” said Lyons, citing petroleum transport tankers and commercial aircraft as examples. “With our commercial networks, we’re able to do things that we otherwise wouldn’t be able to do, and we need to collectively evaluate potential vulnerabilities.”

Lyons surmised that by thinking logistically we can maintain strategic advantages.

“The fundamental purpose of logistics in our armed forces reflects our ability to project sustaining combat power globally at our time and place of choosing,” said Lyons. “The level of synchronization and level of complexity increases as the demands increase, and our allies and partners are key in expanding those logistics networks.

“Whether coming from the air, land or sea, thinking about where nodes and the ramps connect can give you that strategic flexibility to position forces that provide us an advantage over our adversary physically and psychologically,” Lyons concluded.