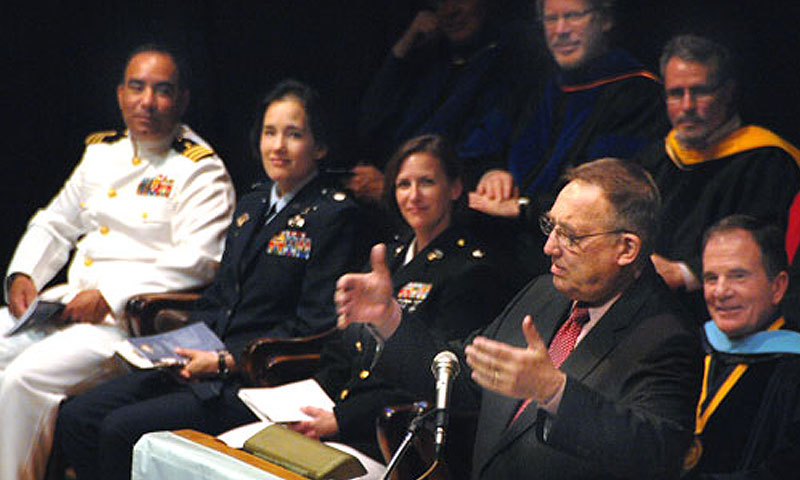 Chief Operating Officer of EADS North America, retired Rear Adm. David. R. Oliver, Jr., delivers his keynote address during Spring Graduation ceremonies, June 17. During his speech, Oliver stressed the unique position NPS alumni have in affecting history, and encouraged the graduates to seize their opportunities to do so when presented.

In introducing the keynote, NPS President Dan Oliver remarked jokingly, "Some people confused him with me … and although Dave and I are not related, as far as I know, I’m glad to know him as a friend and colleague and I’m always flattered when we are confused."

David Oliver is the Chief Operating Officer of EADS North America, a division of EADS, the second largest defense and aerospace company in the world. In addition, during his second administration, former President Bill Clinton appointed Oliver to serve as Principal Deputy Undersecretary of Defense for Acquisition, Technology and Logistics.

During his keynote, EADS' Oliver brought his variety of experiences as a military flag officer, Department of Defense leader, and industry executive to his presentation. He reminded the graduates that, given the education they had each received, an inflection point in their careers may soon be on the horizon.

"If you graduates will look up and down your row,” he said, “In the next 10 years, one of you in each row will have the opportunity to change history, which is not to say that the lucky one of you will seize that opportunity, for you may not.”

He noted that history-altering moments do not come with a heads-up announcement. “They come when you are tired … They are as ephemeral as a butterfly that rests on all its wings slowly moving in the corner of your eye, and when you see it, you may or may not recognize it,” he said.

“If you are not prepared and do not recognize the situation for the uniqueness which it is, that iridescent moment will be gone the next time you open your eyes. There will be no record the butterfly existed. No one else will ever know history could have been altered, and history could be anything other than what it is for your children than what it is now, except you in your heart will know,” he added. 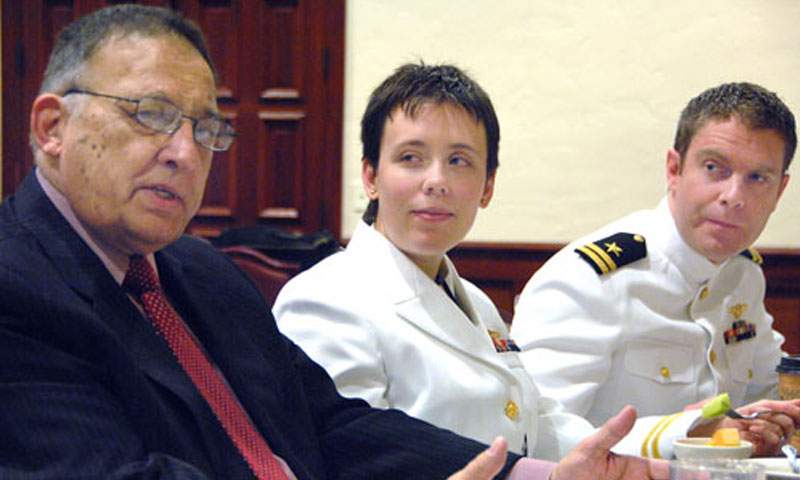 A tradition during every quarter’s graduation is the Speaker’s Breakfast, where select students are afforded the opportunity to engage with the commencement speaker in a more informal setting. Here, from left to right, retired Rear Adm. and EADS North America senior executive David R. Oliver, Jr., discusses the qualities of leadership as students Lts. Elaine Reid and Nathan Matson listen in.

The unique ability NPS graduates have to impact world was a key message Oliver delivered to the 270-plus new alumni.

“You are in one of the few professions which can change history for America, and because of America’s position in this world, you can change history for the world,” he continued. “Free discussion requires an atmosphere unembarrassed by any suggestion of authority. If a subordinate always agrees with his superior, he is a useless part of the organization. All men are by nature conservative, but conservatism in the military profession is a source of danger to the country.

“If you [are] ever fortunate enough to recognize the butterfly … to seize the opportunity which will make your own row proud, I wish you well,” he concluded.

David Oliver commented, “President Oliver and the faculty here have a great atmosphere and the students have taken advantage of it. It’s wonderful to see people interested in learning and interested in getting to know all the other cultures that are here. It is a wonderful part of our nation’s bigger goals. I appreciated the opportunity to speak.”

Ten days prior to the formal graduation ceremony, top faculty and students were recognized for their outstanding achievement at the Spring Quarter Awards ceremony.

Phillips officially received his Navy League Award for Highest Academic Achievement, and was actually the recipient of two awards, receiving the American Society of Naval Engineers Award for Excellence in Naval Engineering.

"NPS provided a team of players to include my program officer, thesis advisors and relevant operational research opportunities to be successful. The unwavering support of my spouse was crucial to my success here. The problem solving abilities that I learned here will be invaluable as I return to the Fleet to make decisions in my career field," added Phillips. "There is a foundation here like none other available at any other institution to do relevant operational research and make it available to the warfighter today. My instructors were committed to my success and it has allowed me to depart with a provisional patent and several papers under consideration in national publications for my work.”

“The difference between all of the international students is minor … there certainly are others who could also have been selected to receive the award,” said Struss. “I had an excellent experience here at NPS with my focus on Middle East Studies and exchanging ideas with other students. It was an interesting subject area and I enjoyed the opportunity to study at NPS.”

Retired Cmdr. E. Cory Yoder, Senior Lecturer in the Graduate School of Business and Public Policy, received the Admiral John Jay Schieffelin Award for Excellence in Teaching. Yoder said that he was elated to get the award knowing the criteria to even be nominated. A ‘93 NPS graduate himself, Yoder noted that his success here and his subsequent DoD and NATO tours, is directly attributed to his time as a student here. He says that he aspires to deliver the same commitment to developing and delivering quality graduate education to all of his students.

“I want to make learning challenging, but also fun and memorable. I want the students to get something out of my teaching and be able to use the tools that they learn within and beyond their military careers. I don’t want to give training, but rather critical thinking skills at the tactical, operational and strategic levels of military acquisition and contracting. The focus is not just their next tour, but to acquire the tools to enable them to become future flag officers,” said Yoder. “My primary focus, since day one of my arrival, is the NPS institution. I strongly believe in our mission and the empowerment it provides our stakeholders,” he added.