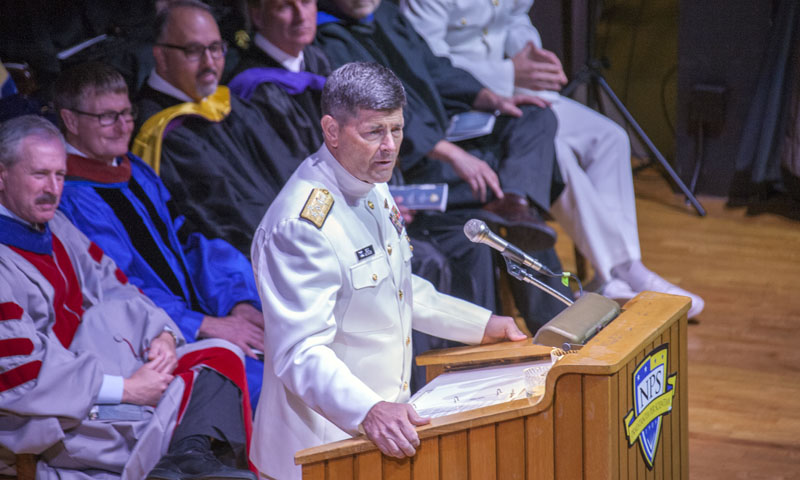 “We are here today, along with family and friends, to express great pride in our students’ academic achievements,” he said. Route went on to thank the faculty, staff and loved ones that contributed to the students' successes, while also recognizing the NPS Foundation for providing the university with an important “margin of excellence.”

He then turned the podium over to commencement speaker Adm. Bill Moran, Vice Chief of Naval Operations, who spoke of the journey ahead, the challenges of limited resources, and how the nation must maintain an asymmetric advantage.

“Thank you for having me here today,” opened Moran, “There is probably no better place to be on the planet.”

The Vice Chief remarked at how happy and upbeat the graduates appeared as they entered the auditorium, but noticed a more somber, subdued look on the assembled families. He noted, with a laugh from the audience, “Maybe this is because you are leaving Monterey, Pebble Beach and this great weather. Or maybe it’s the thought of going to places like Fort Bragg, Twentynine Palms, Cannon Air Force Base or, for the Navy, to Lemoore,” he quipped.

Moran then entered into the more formal part of his message to the students. “Today marks the culmination of a lot of hard work with the achievement of your degree from a fantastic educational institution,” he said, highlighting the Navy’s need for critical, innovative thinkers in the fleet.

But in the time students have been at NPS preparing for this moment, he noted, the world outside has continued on, with more and more people competing for limited resources, improved capabilities, and a technological advantage ... And doing it all at an exponentially faster pace.

“Some of these competitors pose real threats, some are direct adversaries, and some are simply out there to peacefully compete for limited resources,” he noted. “But all of them can create problems for all of us.”

In the past, he reflected, since around the time the Berlin Wall fell nearly 30 years ago, the U.S. hasn’t needed to compete.

“We have held what is often described as an asymmetric advantage on many fronts and domains,” Moran said. “For a time, we dominated cyber and space, but we watched as all of these domains became accessible, even on the fringes.

“It feels like, as the pace of technology is advancing at an expediential rate, the playing field is starting to level. This is where you come in, as graduates of this institution,” he stressed.

With a greater demand on technologies and capabilities, we need “move the innovation curve upward and outward, and you know how to do that,” Moran noted.

“NPS graduates have a unique way of looking at problems and collaborating to find solutions. We need creative solutions and creative leaders, yesterday. Luckily, we have 50 percent of that equation solved and figured out here today,” he added.

The Vice Chief then transitioned his discussion to the challenge of limited resources, and the critical importance of taking care of your people.

“We need to find the appropriate balance between capability and capacity to make the most of what we already have,” he said. Over his many years in the Navy, Moran says he has learned that building a team made up of individuals with diverse viewpoints, perspective and backgrounds is always an advantage in tackling the complexity of modern conflict.

“Your degrees have diversified you in ways you could only imagine right now,” he said. “When you get back to the fleet, the value of that background, of that diversity, will become more and more apparent.”

In closing, Moran reflected on all of the members of the extended Navy family he has interacted with over his weeklong West Coast trip ... A trip that started with a Silver Star presentation to a young Petty Officer in San Diego, followed by the 75th anniversary celebration at Whidbey Island Naval Air Station, and ending here at NPS.

“Together, all of us are asymmetric advantages for our Navy, Air Force, Army, Marine Corps, our federal agencies and hopefully our communities around this great country,” he said. “Thank you for making it through these past couple years, and achieving this very important milestone.” 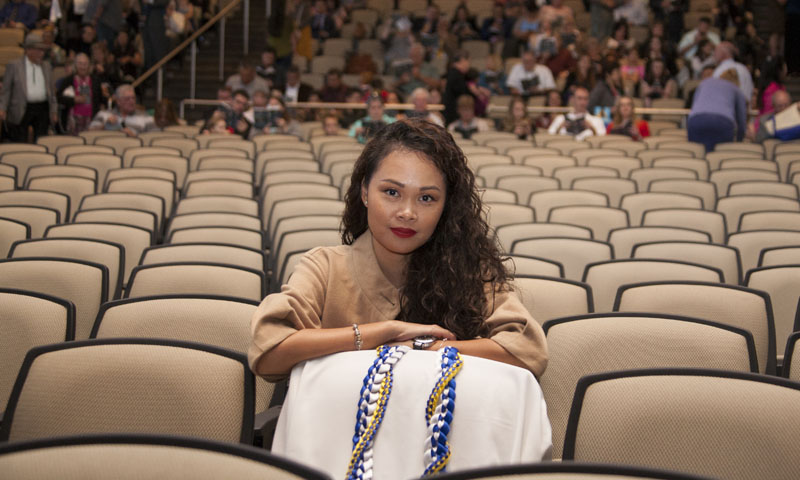 Rechelle Coballes sits with the chair her husband, DOD civilian Linus Coballes, should have been sitting in with his fellow graduates in NPS Executive Master of Business Administration program. In a unique, touching moment to the event, Coballes’ name was read and he was recognized posthumously, followed by a moment of silence in his honor.

While the ceremony continued with the traditional crossing of King Auditorium’s stage by each graduate, a rare and tragic circumstance added a unique, touching moment to the event. Among the class of nearly 300 graduates, a young, DOD civilian by the name of Linus Coballes was unable to participate in this seminal moment as a severe illness took his life far too soon.

With the chair he should have been sitting in draped in white cloth, Coballes’ name was read and he was recognized posthumously, followed by a moment of silence in his honor.

Coballes started his career with the federal government at the age of 18, joining the Naval Facilities Engineering Command in the Washington Navy Yard in 2014 until he passed away in 2016. He earned an undergraduate degree in accounting from Hawaii Pacific University, and completed the 28-month DON Financial Management Career Program as well as the Naval Facilities Engineering Command’s rigorous 24-month Leadership Development Program.

A rising star in the federal workforce, Coballes enrolled in NPS’ Executive Master of Business Administration program in September 2015. Coballes’ wife of seven years, Rechelle Tanwangco Amistad Coballes, traveled to the university to represent and honor her husband’s memory.