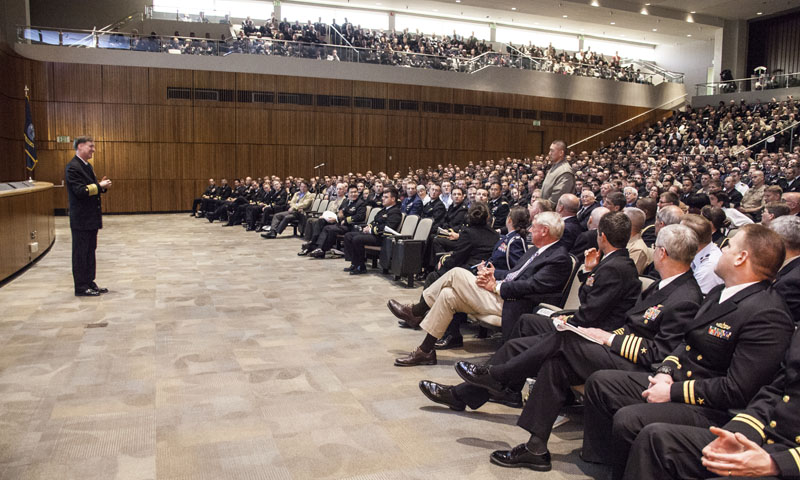 Vice Chief of Naval Operations Adm. Mark Ferguson fields a student's question during an all-hands call in the university's King Auditorium, April 25. An NPS computer science graduate, Ferguson was on campus to participate in the university's Board of Advisors subcommittee meeting.

During the visit, Ferguson, a graduate of NPS’ computer science program, took part in the semi-annual meeting of the university’s Board of Advisors subcommittee, and shared his vision for the Navy with members of the NPS community.

“We see this next century as a maritime century,” said Ferguson. “A century that will demand our naval forces to be available as the nation’s emergency response force. We’re agile, deployable and able to operate forward without a permission slip. We have to be where it matters, when it matters and we’re positioning the force in order to do that.”

Expanding on his experience working with the Navy’s budget, Ferguson noted that in spite of the current ambiguity surrounding the nation’s fiscal outlook, the demand for forward operating naval forces is at an all-time high.

“In spite of the fiscal uncertainty, there has never been greater demand for our Navy and Marine Corps forces around the globe. It is unprecedented,” he said. “With our 283 ships in the Navy, more than half are underway on any given day.”

Detailing his own experiences while studying at NPS, Ferguson shared with students the relevance graduate education has had on his military career.

“My experience here set me on a lifelong course with a love of learning,” continued Ferguson. “That and the exposure to innovation are the critical components of what this school generates.”

Coupling academic rigor with operational experience develops dynamic officers, capable of solving some of the military’s most complex problems. According to Ferguson, this is exactly what NPS instills in its students.

“With the security challenges we’re going to face in the future, an officer with a broad-based education that is technical, operational, and jointly-focused, enables them to meet the challenges of the future. We need officers moving forward that can think, evaluate, judge, decide and act, and this is exactly what this institution produces.”