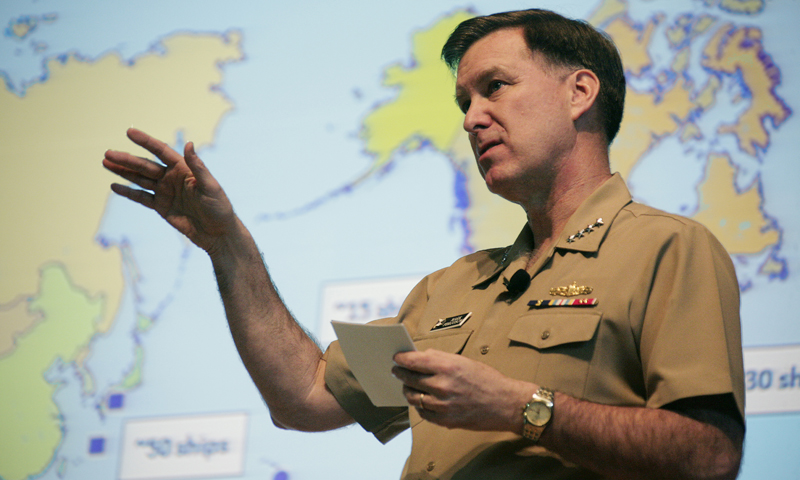 Vice Chief of Naval Operations Adm. Mark Ferguson delivers a Secretary of the Navy Guest Lecture to students, faculty and staff at his alma mater, the Naval Postgraduate School, Feb. 16.

Vice Chief of Naval Operations Adm. Mark Ferguson visited his alma mater to offer a Secretary of the Navy Guest Lecture (SGL), Feb. 16 to students, faculty and staff at the Naval Postgraduate School (NPS). Ferguson addressed defense budget projections for the future and the Defense Department's renewed focus on the Pacific Rim region.

Having himself received a Master of Science Degree in Computer Science from NPS in 1984, Ferguson understands firsthand the value of training and education for our nation's officers, and encouraged students to take their time here as an opportunity to grow into a better leader for the Navy’s future.

“We train people to replicate, we educate to reason,” said Ferguson. “You are being educated to reason and to shape our future as we go forward. Your critical thinking and what you learn here will carry forward to the fleet and into your commands, into our laboratories, into the field. It’s going to be what shapes our future.

“Each of you are empowered,” he continued, “and each of you should take it as a charge that your mission is to make that contribution, make that innovation that makes us better as a service. Challenge some of the things that we are doing. Take the things you have learned and go out there and use it for good. For the good of the Navy, the Marine Corps, and your service.”

Ferguson spoke about the Navy’s acquisition plans for the future, as well as the new defense strategy the planned rebalance of forces to Western Pacific. He explained that the shift is supported by the Navy’s commitment to maintaining a global presence, and a result of the drawdown in Iraq and Afghanistan. He referred to details of the defense budget to note the resources that will follow the guidance of the new strategy as funding is shifted and ships repositioned.

“If you look at the budget decisions that we’ve made, the underlying force structure remains relatively unchanged for the Navy,” Ferguson explained. “We are at 285 ships today, by the time the end of this budget rolls around, we’ll have about 285. But the mix will change.

Ferguson praised today’s sailors, noting that the retention rates and qualifications of the men and women of today’s Navy are the best they have ever been. He pointed to a 99 percent high school graduate rate and a 65 to 70 percent retention rate as evidence of the positive steps being taken to create a leaner, more capable force amid budget cuts.

“For you as leaders going forward, this is an important inflection point in your experience as a military officer,” explained Ferguson. “And it’s important because in the last 10 years, if you were to look at defense spending in both the base budget and supplemental spending, we’ve been on a steady upward road."

“We’ve been engaged in two wars, the force is performing magnificently. It is resilient. It is tough. It is well trained. It is probably the most combat-ready force we’ve had,” he continued. “It’s under strain in some areas, under intense pressure in other areas, but it’s battle hardened, and it’s a very ready force. But this inflection that has taken place represents a shift in the trajectory of our budget that many of you in this room have never seen in your career. It will define the future that we come into in the next ten years.”

Following the SGL, Ferguson paid a surprise visit to the Trident Room in Herrmann Hall to present NPS Defense Analysis student Lt. Cmdr. Jonathan Fussell his fourth Bronze Star with Valor. Fussell was presented the award for his work as Troop Commander for Naval Special Warfare Development Group, where he led a joint and interagency task force on Direct Action missions in Afghanistan.

“While Capt. Poindexter and I had originally coordinated a very low profile presentation in the Trident Room, the Admiral's presence was a welcomed addition,” said Fussell. “It was an honor to have him present me with the award. Having never before seen me receive an award, my wife Rachael got a real kick out of it.”

Ferguson also met with NPS leadership to discuss the school’s impact on the Navy, and the programs that can ultimately help prepare students to lead in any number of critical areas of expertise. He noted in his lecture to students the importance of receiving an education in a collaborative environment, where problems solved today will have a lasting impact for the defense community in the years to come.

“The things you are doing now, in the research and the laboratory, my prediction is that 15 years from now you will see them come to fruition in the naval profession, and be the centerpiece for what we do,” Ferguson said. “My charge to you is to be ready to lead. To go out and impact the finest Navy we’ve ever had in our history.

“So as you go forward in your career, I encourage you to take opportunities for education outside of your comfort zone,” he concluded. “It’s a fundamental part of education, seeing how other people think. Checking your own premises and understanding that will make you a better leader. It will make you able to rise to those challenges in the future.”