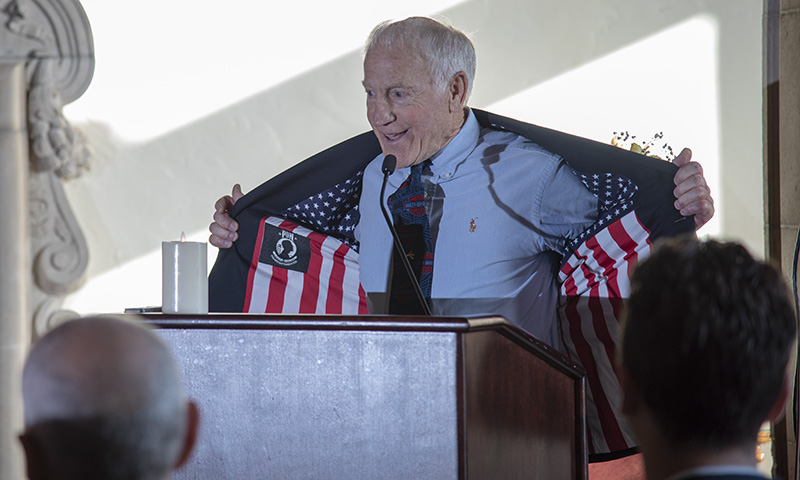 Vietnam War prisoner-of-war Larry Friese revealed the patriotic lining of his sports coat at the conclusion of his remarks at the Vietnam War Veterans Day commemoration March 29. Friese retired from the Navy as a commander in 1985.

NAVAL SUPPORT ACTIVITY MONTEREY (April 3, 2019) -- Vietnam War veterans were honored at Naval Support Activity (NSA) Monterey, March 29, on the day dedicated to their service and sacrifice. The Vietnam War Veterans Recognition Act of 2017 designates every March 29 as a day to honor all United States veterans who served on active duty in the U.S. Armed Forces from November 1, 1955 to May 15, 1975.

“Something happens, someone you meet, a group of veterans, those that have come before you and served, and through hearing their stories of their service, you realize you are a part of something bigger than you,” Wiley said. “For me that is being part of the line that is Naval Air and that you’re not just standing by yourself, but rather you are carrying on the honor and dignity of those who have gone before you.”

The first speaker, Dr. Mitch Brown, said he reported for duty with the Seawolves of Helicopter Attack Light Squadron Three, HA(L)-3 on April 1, 1970, two years after graduating the U.S. Naval Academy. The freshly-minted Lieutenant Junior Grade piloted the UH-1B Huey gunship as a member of the only Navy armed combat helicopter unit that operated in South Vietnam from 1967-1972. Coincidentally, March 29 is a significant date for Brown.

“What were you doing 48 years ago today? I checked in my pilot’s logbook and according to that, March 29, 1971, was the actual date of my last helicopter flight in country in Vietnam. Seems appropriate,” said Brown, who retired from active-duty as a Navy Commander Aug. 31, 1994, and is now a professor at the Naval War College’s College of Distance Education at the Naval Postgraduate School.

During his remarks, Brown reminisced about his days in the Mekong Delta, near the Cambodian border.

“We were at the end of the Ho Chi Minh Trail. The North Vietnamese came down and it was our job to meet them and thank them for making the trip. It was an interesting time,” Brown said.

There were eight pilots and eight enlisted gunners in Brown’s detachment who not only “greeted” the North Vietnamese, but would also provide cover for ground forces.

“We usually flew 24 hours on, 24 hours off. Whenever the call would come in for support the on-duty crew would scramble, jump in the helo gunships, and take off in two or three minutes and fly directly to whoever was under attack on the ground,” Brown recalled.

Brown left Vietnam on April 2, 1971. On that date, Marine Corps Capt. Larry Friese was into his fourth year as a North Vietnamese Prisoner of War (POW). While on his 138th combat mission in Vietnam, Feb. 24, 1968, his A-6 Intruder was shot down. At first Friese was able to elude his captors, however, four days later he and pilot Major Jerry Marvel were captured and imprisoned at the famed “Hanoi Hilton.”

“My 138th mission didn’t go too well,” said Friese. “I ended up in a Communist prison camp and every once in a while they’d throw something to me in my cell to read. Their goal was to eradicate capitalism from the globe, and they were proud of that goal.”

Besides learning of the North Vietnamese goals, he discovered their philosophy about war from an officer at the camp.

“On one occasion, in one of their stinkin’ little re-education rooms, one of their officers told me ‘contrary to what we’d like to believe, wars are never settled over a conference table, they are ALWAYS settled on the battlefield,”’ Friese said.

Friese had time to ponder Communist ambitions during his 1,842 days in captivity, 540 of those in solitary confinement. With the minutes and hours turning into days and years, Friese remained prideful.

“So I sat in prison month after month, year after year and thinking about those two things – that they want to eradicate capitalism and it’s gonna happen on the battlefield. It made me feel pretty proud I was over there fighting against that,” Friese said.

In the fall of 1968, the United States elected a new President. Richard Nixon would soon be taking office.

“I was stoked. I thought good, this guy understands how the Communists think and he’ll kick this war off dead center, right? Well, not too right. Four years go by and it’s time for our elections again and I’m still in a prison in Vietnam,” Friese said.

However, something was different in 1972, Friese said. Nixon won his reelection in a landslide victory, and in April, the United States launched an aerial interdiction campaign against North Vietnam. Operation Linebacker II overwhelmed the North Vietnamese and invigorated the POWs.

“December 18, 1972. I was there in a cell with about 40 other guys. And man, were we stoked. You’ve heard of sensory overload? Think about all five senses getting overloaded. The noise all night long was horrendous. The light show was amazing. Every time something would blow up there would be a flash. Surface-to-air missiles were corking off, and the anti-aircraft artillery was being shot by the thousands of rounds,” Friese vividly recalled.

It was not the sights and the sounds of the six-month Linebacker II Friese remembers the most.
“All this stuff going off and blowing up put a smell into the air that was so thick it would get into your mouth. And you could taste it. And I always said it tasted like going home,” Friese said.

Three months later, going home would be reality for Friese and the other POWs.

“And just like that North Vietnamese guy had said, wars get decided on the battlefield. Peace, through superior firepower, and freedom through shock and awe. And that’s exactly what happened, 90 days later every one of us was back in the good old USA,” Friese said.

Friese closed the commemoration thanking everyone who helped bring him home from Vietnam.

After thanking the crowd, it seemed Friese could not resist showing off the lining of his sports coat.

“Without regard for whatever God you may or may not believe, and in the spirit of the slogan ‘God Bless America,’ I want to show you my POW jacket,” Friese grinned as he opened his sports coat to show the lining which resembles an American flag.

Friese and pilot Major Jerry Marvel were released on March 14, 1973. After his release Friese transferred his commission from the Marine Corps to the Navy. He attended the Naval Postgraduate School, receiving his Master’s Degree in Meteorology and Oceanography in December 1976. His final assignment was with the Fleet Numerical Oceanography Center at Monterey where he retired on June 30, 1985. He and his wife, Lillian, who lost her first husband in Vietnam, reside in Monterey.

Mitch Brown’s unit, the HA(L)-3 Seawolves, is considered the most decorated Squadron in the Vietnam War with five Navy Crosses awarded, 31 Silver Stars, 219 Distinguished Flying Crosses, 15,964 Air Medals, countless other Medals, and received multiple Presidential Unit Citations. A documentary, “Scramble the Seawolves,” detailing the decorated squadron was released last year and is available on Blu-Ray at the Dudley Knox Library.

The Department of Veterans Affairs estimates that today there are 6.4 million living Vietnam veterans and 9 million families of those who served during the time frame November 1, 1955 to May 15, 1975. National Vietnam War Veterans Day joins the six other annual, military-centric, national observances codified in law; among them Memorial Day, Independence Day and Veterans Day.