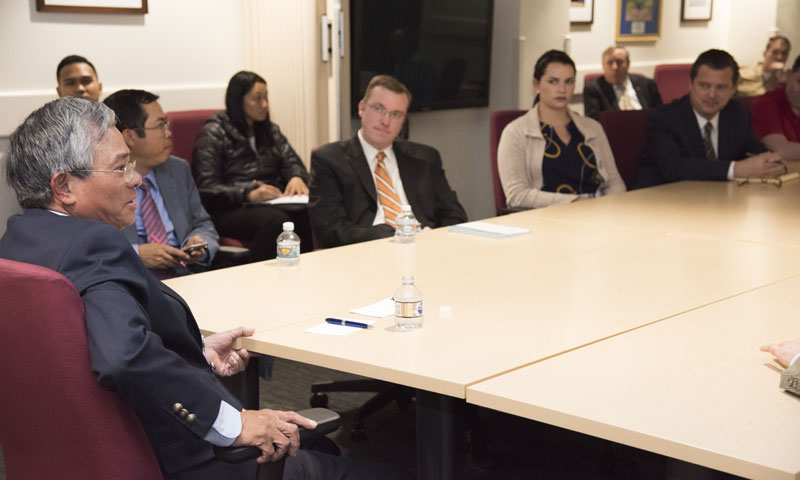 Vietnamese Ambassador to the U.S. Pham Quang Vinh, left, holds a candid discussion with NPS Department of National Security Affairs students and faculty during a visit to the university, April 2.

Graduate students at the Naval Postgraduate School (NPS) had the opportunity, April 2, to talk directly with the Socialist Republic of Vietnam’s ambassador to the U.S.

Ambassador Extraordinary and Plenipotentiary of the Socialist Republic of Vietnam to the United States of America Pham Quang Vinh set aside time during a visit to West Coast to meet with NPS students and discuss a wide range of issues related to their field of study, national security studies with a specialization in the Far East, Southeast Asia and the Pacific.

“Vietnam and the U.S. normalized our relations in 1995. We had a war before that, a very fierce war,” Vinh said. “But our nations have travelled so very far together since then.”

Over the last 23 years, trade between the nations soared over a hundred fold, from $450 million a year to well over $50 billion. Vietnam sends more students to study in the U.S. than any other Southeast Asian country, and the Fulbright Program recently opened the first private, independent university in Vietnam.

Political and diplomatic relations have flourished, as has security cooperation. Four U.S. presidents have visited the country, including President Donald J. Trump last November, who emphasized the necessity of building strong partners in the region.

Days before the 50th anniversary of the Tet Offensive, Secretary of Defense Jim Mattis landed in Vietnam to initiate a pillar of the new National Defense Strategy: to strengthen existing alliances and forge new partnerships in the region, including Vietnam.

Last month, the Navy’s massive nuclear-powered carrier USS Carl Vinson made a four-day port call in Da Nang, the first time such a ship has docked in Vietnam since the war. Reflecting on these major strides, Vinh told the students that he was honored to have the chance to talk with them about the way forward for U.S.-Vietnamese relations.

“We still have so much more potential to work together,” Vinh told them. “We consider you not only as a partner of the region, but a resident power that can lead and will guarantee stability in the region ... We very much expect the U.S. to grow in the region: to be strong, but also be sustained.”

The U.S., however, can do it neither alone nor through bilateral relations, he said. Working through multilateral organizations such as the Association of Southeast Asian Nations (ASEAN) is the best way to work towards maintenance of rule of law, freedom of maritime navigation and regional order in accordance with international law.

“We very much hope that the new national security strategies under President Trump will work together with these initiatives,” Vinh said.

Economic engagement should be just as much a part of this as political and security arrangements.

“How you connect the bilateral components of trade agreements with different countries into a regional system that can govern the rules of the game will be very important in the region,” Vinh said.

Adopting such an approach may be the best way to deal with China, which has emerged as an aggressive force in the region. First and foremost, according to Vinh, it is imperative to foster good relationships with China itself. China is strategically important and anything it does has a direct effect on regional peace and stability.

“I mean ‘good’ in the sense that any opportunities [for growth] need to be utilized, while at the same time any behavior which is contrary to international law needs to be addressed as well,” Vinh elaborated.

“Working together both as partners and competitors will be seen in that way. Working together through multilateral processes to build regional norms will govern the behavior of the countries and provide checks and balances with individual behaviors,” he added.

Changing gears, Vinh addressed an internal sea of social change in Vietnam over the last 15 years. Driven by increasingly pervasive access to the Internet, it has redefined how Vietnamese society engages the world – from Facebook to football to K-Pop, Vietnamese are very much integrated in global affairs.

“We have about 142 percent of our people with mobile phone subscriptions – that’s 1.4 mobile phones per person,” Vinh said. “The Internet has become a habit of Vietnamese people, and I cannot imagine a world nowadays without it.”

For Lt. Stephany Breau, a student in the National Security Affairs department focusing on Asia, this take-away was direct.

“Hearing his emphasis on multinational organizations was very interesting, especially since the U.S. hasn’t had as much interaction within these,” said Breau. “He emphasized we need to have a lot more to build that trust and those relationships.”