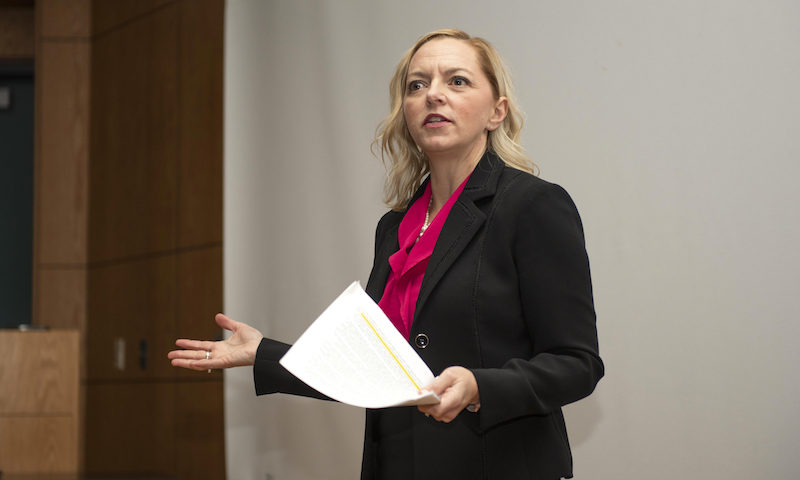 Born to a teenage mother in a small Wisconsin town, Laurel Minik explained to a small Naval Postgraduate School audience that her future appeared to have too few options. She recalled as an adolescent, however, telling her mother that she was determined to go to college. And she did.

Through education, she was able to rise through the ranks in marketing at the Coca-Cola Company, eventually joining NPS. Minik shared her story during the NPS Heritage Committee’s Women’s History Month commemoration at the campus’ Mechanical Engineering Auditorium, March 27, hosting Minik, NPS Director of Institutional Advancement, as keynote speaker.

The event’s theme was “Visionary Women, Champions of Peace and Non-violence.” The brief presentations highlighted women’s personal and professional achievements across a range of vocations from sports to military service.

“These sorts of celebrations really help to educate people of what women are capable of, and that is what we need today,” said Minik. “This theme is so important because we need to be champions for ourselves and each other. It was really uplifting to reflect on the struggles that all these great women have faced and how they overcame them.”

During her remarks, Minik did some reflecting of her own by detailing her own personal story of growing up in rural Wisconsin.

“I remember questioning what my future would be. ‘How was I going to change the direction my life seemed to be going?’” Minik stated in her speech. “The thing that would become my sense of purpose, my laser-like focus was changing the trajectory of my life. Stop the cycle of teenage pregnancy and poverty from the previous three generations of women in my family. From my perspective, there had to be an easier way.”

Her passion and long-term goals to break the cycle gave her momentum to face unexpected challenges. After graduating college, getting married, and joining Coca-Cola, she saw initial success in marketing. The gender barrier became present, however, and she was relegated to support functions, even having to relinquish her office to a man. Minik then made the choice to start a family, and faced even more obstacles making her way up the ranks while time raising her children.

“Fearing that I couldn’t pursue another job because no one is going to hire a pregnant woman, I decided to lean on education again and enrolled in a two-year MBA program,” said Minik. “Six months into the program, we welcomed my son.”

In 24 months, Minik had two sons and completed her MBA, all while facing resistance in the workplace.

“Earning my MBA proved to be the best decision for my career. Soon after, I was promoted to a regional marketing manager,” said Minik. “Despite the tremendous amount of stress I experienced, the obstacles were a gift ... a gift of motivation to change the direction of my future with education.”

Also part of the commemoration was Yeoman 1st Class Alice Flowers, who helped organize the event as a member of the Heritage Committee. She drew inspiration from Minik’s story to help keep her focused on her own goals.

“This kind of event, listening to the stories of other people, really helps inspire you to continue focusing on your goals,” said Flowers. “Our goal for the Heritage Committee is to help increase involvement and camaraderie at NPS. Even though we have come a long way, there are still unique challenges that women face, and we aim to face those challenges moving forward.”

Women's History Month started as Women's History Week in 1978. In 1987, Congress was petitioned to expand the week into an entire month to recognize the many contributions women have made to the nation.