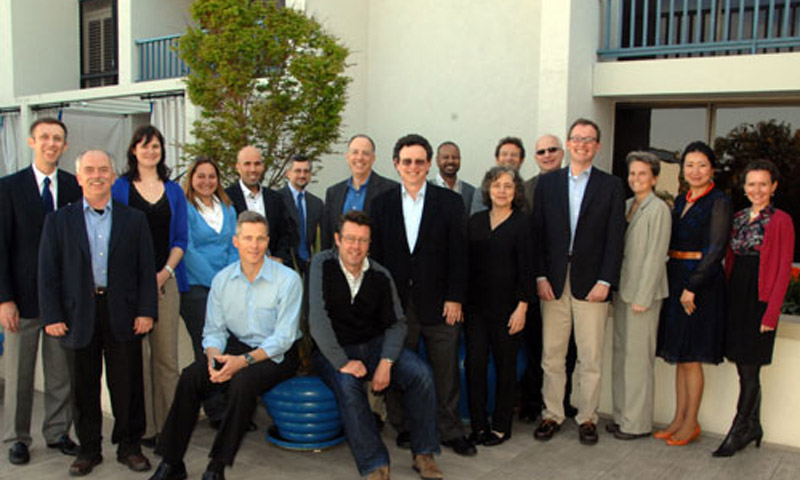 Participants in the Multilateral Cooperation on Nonproliferation Workshop, presented by NPS' Center on Contemporary Conflict, gather for group photo, Mar. 30. The event brought experts from academia and non-governmental organizations from the U.S. and abroad together to examine the effectiveness and lessons learned from existing multinational cooperative efforts in the control of weapons of mass destruction (WMD).

“We are an epistemic community writing about epistemic communities,” Dr. Jeff Knopf, a senior lecturer with the Naval Postgraduate School (NPS) department of National Security Affairs (NSA), said with a chuckle about a recent workshop he hosted for the NPS Center on Contemporary Conflict (CCC).

So what exactly is an epistemic community and why would NPS invest time, money and man hours hosting a workshop to both build and study one on multinational collaboration on non-proliferation of weapons of mass destruction (WMD)?

“An epistemic community is a group of knowledgeable experts with a set of shared beliefs that emerges during times of uncertainty to influence policy makers,” said Sara Kutchesfahani, a post-doctoral research associate at Los Alamos National Laboratory and one of 24 participants at that aforementioned CCC workshop on non-proliferation.

Kutchesfahani presented her doctoral research on the events that led to the creation of the Brazilian-Argentine Agency for Accounting and Control of Nuclear Materials (ABACC).

“In the case of Argentina and Brazil’s nuclear non-proliferation agreement, much of the work was done and much of the decision-making occurred around tables – similar to what we are doing here,” Kutchesfahani said.

“The epistemic community was integral in moving both governments toward a non-proliferation agreement. Scientists in nuclear facilities began talking to one another and eventually collaborating. We cannot undervalue the importance of the epistemic community,” she continued.

If epistemic communities have proven effective and necessary in causing long-term policy changes as shown in the ABACC example, why does the CCC need to study them?

“This workshop began out of conversations I had with some of the faculty in the NSA department,” said Knopf. “We felt like there was a gap between how the academic literature described cooperation in the international community and what we were experiencing in our work. The literature focused on negotiations, and whether they resulted in a treaty being signed and ratified.

“We wanted to look at how nations were handling issues after treaties were in place, such as if one nation suspected another of cheating on the treaty, or if unexpected problems emerged, such as the danger of non-state actors obtaining WMD.

“There is a lot more international cooperation that’s happening on issues of national security than most people realize,” Knopf continued. “It arises out of necessity; many nations are facing global and transnational threats. It’s become difficult for one nation to tackle these issues on its own, so states are improvising and forming new types of cooperation. These are the types of communities we are looking at to see what ingredients made for successful instances of multinational cooperation and which didn’t.”

And as Kutchesfahani points out, epistemic communities often take a long time to bring about policy changes: “It took 20 years of steady work by scientists in both countries before ABACC was signed, but the steps along the way were key for ABACC’s success.”

David Santoro, a workshop participant and senior fellow for nonproliferation and disarmament at the Pacific Forum Center for Strategic and International Studies agreed that the process is as important as the eventual outcome.

“While there haven’t been as many formal successes in international negotiations with Iran, there has been a lot of progress made in dialogues. These steps need to be appreciated for the progress they represent,” he noted.

And just exactly what change is CCC trying to bring about through the epistemic community it’s building?

“We want to let policy makers know how to elicit as much cooperation as possible. Every country has its own threat perceptions, and it’s hard to get people on the same page,” said Knopf. “We’re hoping through this workshop, and the published papers that emerge from it, that we will be able to offer practical advice on what leads to more effective implementation of WMD and nuclear non-proliferation agreements.”

Participants at the workshop presented research on a variety of efforts intended to prevent the spread of WMD, such as the Cooperative Threat Reduction (CTR) program, the Proliferation Security Initiative (PSI), and the Six-Party Talks on North Korea’s nuclear activities. They will use the feedback they received during the workshop to refine their papers. The plan is to then compile the papers into a cohesive whole for publication and also to present the key findings that emerge to policy makers.