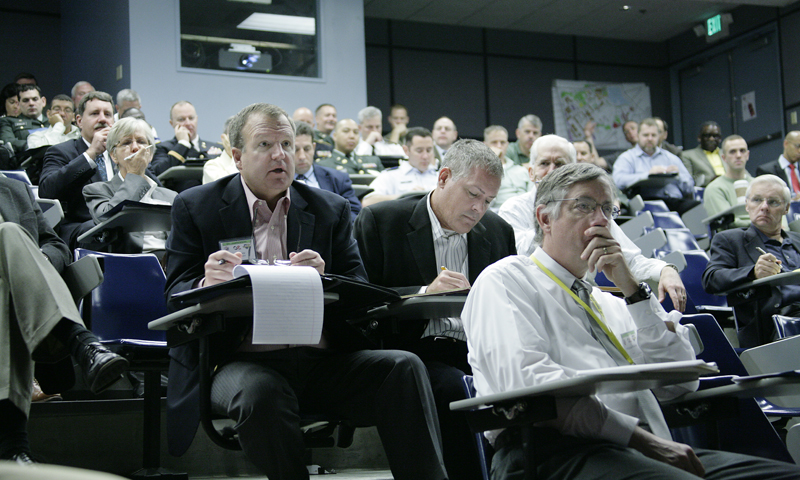 Attendees at the 2011 Cyber Endeavour Conference, held at NPS, interact with presenters in a discussion about cyber threats to critical infrastructure, and the kind of training and preparedness necessary to prepare key networks for potential attacks

Participants in the workshop engaged in presentations and discussions surrounding some of the most pressing cyber challenges today. Participants included leaders from non-government organizations, military, industry, academia and government as they shared insight and explored potential solutions to immediate cyber issues.

On day two of the workshop, NPS Defense Analysis Chair Dr. John Arquilla and Computer Science Senior Lecturer Chris Eagle offered their expertise on the threats posed by cyber attacks, and how the impact of a cyber attack could translate to physical damage.

Arquilla spoke about cyber warfare as a seemingly different kind of battle in that it is not only difficult to be sure who the attacker is, but the response to a cyber attack must be proportionate to the attack. Where those boundaries lie, Arquilla noted, are the things that the U.S. needs to continue to explore to prepare for such threats.

“It may not be the kind of war that features massive field operations,” said Arquilla, “but unless we take a war mindset into the cyber domain, we’re going to continue to be behind the curve.”

Arquilla recalled the Stuxnet worm, which targeted Iranian nuclear facilities and caused significant damage and delay to their nuclear program. Driving home the point that adversaries could utilize cyber to bring about physical interruptions, Arquilla noted that cyber attacks are seen as disruptive rather than destructive.

“The worm was inserted in a way that disrupted a proliferation program … what this form of cyber war suggests is the weaponization of zeroes and ones so that they may have an effect in the physical world,” explained Arquilla. “It suggests a greater freedom of action for countries seeking to pursue their interests in ways that don’t kill people, and don’t require preparations for war, like the mobilization of large military forces. This is something that senior policy makers will find profoundly attractive.” 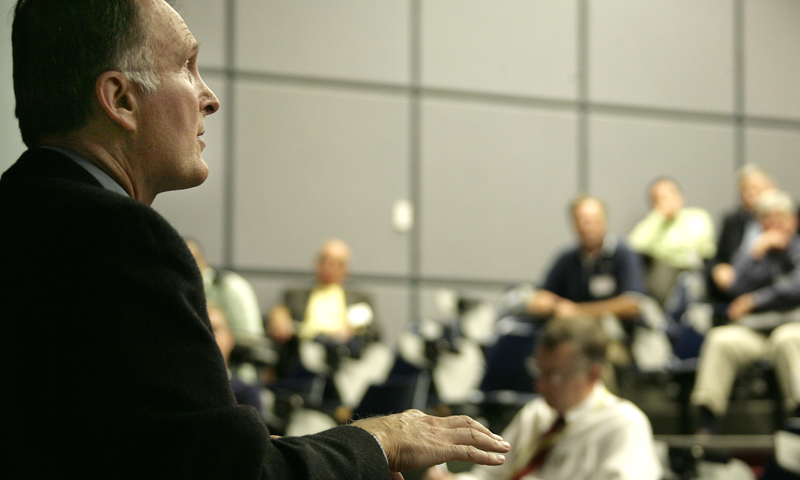 Defense Analysis Chair Dr. John Arquilla presents during the 2011 Cyber Endeavour Conference at NPS in late September. Arquilla spoke about the dangers that ‘zeroes and ones’ can have in the physical world when attackers use cyber means to disrupt critical infrastructure.

The panel discussed how each of their institutions helps to further education and training for cyber professionals. Irvine spoke about the newly established Master of Science degree in Cyber Systems and Operations, and how NPS is poised to educate military and civilians leaders in cyber security and defense. Many of the courses, Irvine noted, will be developed specifically for the degree program based on feedback from military and civilian leaders, while some existing computer science courses will be used.

Attendees of the cyber workshop were also given a chance for a little hands-on friendly competition with Cyber-X Games, which included a series of non-classified individual and team events in cyber attack, defense and forensics.

The conference brought a diverse group of civilians and military personnel together to tackle cyber issues in ways that no single institution can alone.

“Cyber of course, is important to all of us, and all sectors of the population,” explained Edward Fisher, Deputy Director of the Information Operations Center for Excellence. “You can’t really restrict how we approach it to one segment of the population.

“You can’t say that it’s a Department of Defense (DoD) issue and that they will handle it, because it’s going to bleed over to commerce. You cant say it’s only a commercial issue, because the government and DoD have very strong interests in securing cyber space and in making sure that we can use it where we want to use it properly and legally. It’s not a single-focused problem for one group of people.”