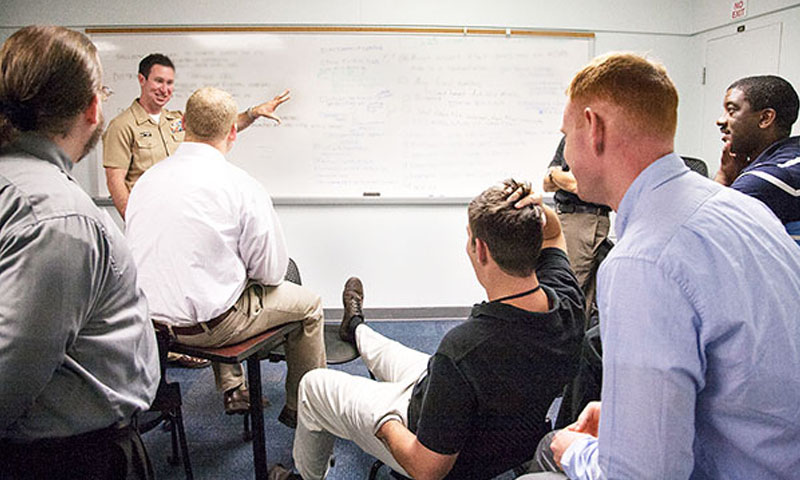 Members of Team Gridley, one of several teams participating in the annual Warfare Innovation Workshop, discuss strategy during a brainstorming session in Ingersoll Hall, Sept. 23. Workshop participants were drawn from throughout the uniformed services, industry and allied nations.

NPS’ Consortium for Robotics and Unmanned Systems Education and Research (CRUSER) co-sponsored the workshop along with the Navy Warfare Development Command (NWDC).

NPS Associate Professor Ray Buettner is CRUSER’s director, and has been involved in the WIW process since its inception.

“The Warfare Innovation Workshop provides a variety of ways for NPS and CRUSER to support one of the Navy’s top objectives for FY15, namely the proliferation of unmanned systems,” said Buettner. “CRUSER uses the WIW as the kickoff event for a two-year thread of activities focused on concept generation, exploration and experimentation.

“Doing this as part of an educational program is a very efficient use of the taxpayers’ resources and a really great way for us to help the Naval Postgraduate School execute its rather unique mission,” stressed Buettner.

Another key aspect of the workshop, notes Buettner, is its support of the Secretary of the Navy’s (SECNAV) call to fully integrate unmanned systems into naval operations.

“The WIW is also an important vehicle for addressing the SECNAV’s goal of integrating unmanned systems into the Department of the Navy’s culture. By bringing together early and late career professionals, in uniform and out, from government, industry and academia to address an important naval challenge – with robotic and unmanned systems thinking integrated into it from the beginning – we infuse such thinking into the naval culture,” said Buettner. NPS Professor of Practice and Warfare Innovation Director Jeff Kline is a long-time supporter of the workshops.

“This is our fourth iteration of the Warfare Innovation Workshop,” said Kline. “We take [the good ideas generated here] and spread them across campus; they become thesis work, capstone projects and research threads for both CRUSER and our Littoral Operations Center.

“Our purpose is to coordinate and execute a series of cross-campus educational and research activities synchronized by the Chair of Systems Engineering Analysis and the Chair of Warfare Innovation with a central theme of exploring future methods for warfighting in the contested littorals,” said Kline.

As suggested by Kline, NPS’ Littoral Operations Center has been a major beneficiary of WIW work. Workshop participants have helped to define and solve strategic and technological issues common to Sailors operating in the littorals – the shallow coastal areas where most of the earth’s population resides.

“We are challenging our students and our guests from industry to address these challenges head on to see if they can come up with some unique concepts,” said Buettner.

NPS Faculty Director for Innovation Initiatives Dr. Neal Thornberry, with the university’s Center for Executive Education, has been working with Buettner and Kline to help workshop participants tap into their innovative and creative potential.

“I ask people to think of innovation as using the creative thought process to help the Navy outsmart, outmaneuver, and outperform our adversaries,” noted Thornberry.

“Innovation should result in a tangible outcome that can be measured in terms of value creation,” continued Thornberry. “For example, getting a wounded soldier to a hospital 10 minutes sooner than the norm due to a creative change in the transport process can create measurable value.

“Innovation is a tool, not a destination,” he added. “We are asking people to be mission ready and to do more with less. Innovation can be a powerful enabler in helping the Navy do things smarter, better, cheaper and faster without sacrificing mission readiness.”

Buettner offered several examples of WIW innovation that have had an impact on naval operations in both blue water and littoral zone operations. He spoke of student contributions to ideas such as the deployment of small Marine groups to islands in the South China Sea, and swarming tactics for unmanned aerial vehicles. He also notes student attempts to address the need of naval forces to operate in the absence of a functioning network.

“What happens when we take the network away? Network optional warfare is one of the concepts that we are exploring,” said Buettner.

Members of the Chief of Naval Operations Strategic Studies Group (SSG) also participated in the WIW. After graduating from NPS, they will be heading to the Newport to work on advanced warfare concepts and strategy at the specific direction of the CNO.

“It was fun to come up with creative out-of-this-world ideas and actually figure out a way to make them useful that is not completely insane,” said SSG member and NPS student Lt. Leslie Ward.

Warfare Innovation Workshop participants were divided into teams drawn from throughout the uniformed services, industry and allied nations. As members of their respective teams, they were asked to come up with innovative ideas and pit them against both global and regional challenges.

Emily Gyde with Battelle, a non-profit organization focused on research and development, traveled to NPS to participate in the workshop. She was part of team Zumwalt.

“We are looking at cutting-edge technologies and exploring the best manner in which to deploy them,” said Gyde.

“The purpose of the workshop is to push the innovation envelope,” added NPS student and fellow Zumwalt team member, Lt. Cmdr. Reginald Johnson.

Participants accomplished this by drawing upon their collective, multidisciplinary expertise and applying it to two notional, but potentially catastrophic scenarios involving future Chinese expansion in the South China Sea, and increased Russian military and economic interests in the Baltic.

“The scenarios are based on current events, extrapolating upon what could happen in 20 years,” said Lt. Mathew Hipple, a member of the Commander’s Action Group for Commander, Naval Surface Forces Atlantic. “We are looking at something that we are familiar with, and expanding it to a worse-case scenario to pit our innovation processes against it.”