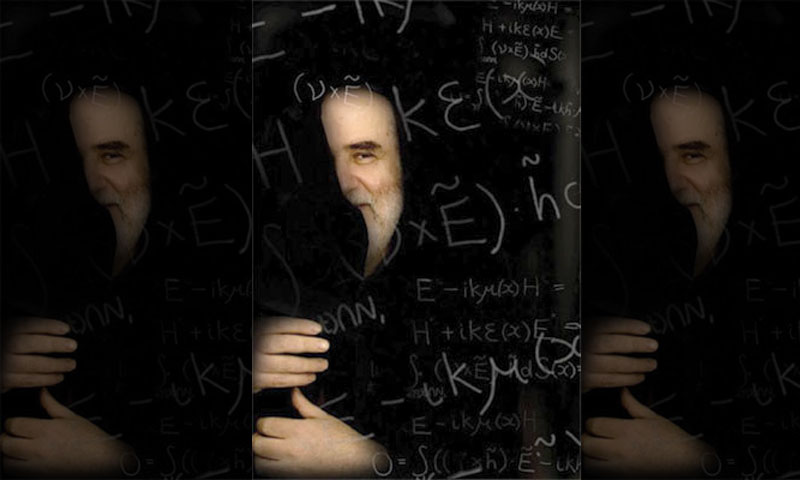 Dr. Gunther Uhlmann introduces his presentation on “Cloaking and Transformation Optics” with an image of himself cloaked behind a veil of mathematical equations. One of the world’s foremost authorities on electromagnetic cloaking, Uhlmann noted that Maxwell’s equations do have transformation laws that would actually make cloaking possible.

Invoking Harry Potter’s magic cloak and H.G. Wells’ “The Invisible Man,” one of the world’s foremost authorities on electromagnetic cloaking, Dr. Gunther Uhlmann, took his Naval Postgraduate School audience down a wormhole into the technological future during his Graduate School of Engineering and Applied Sciences (GSEAS) Distinguished Lecture.

In his presentation “Cloaking and Transformation Optics,” Uhlmann detailed recent theoretical and experimental progress on controlling electromagnetic fields to make objects invisible to detection by electromagnetic and acoustic, and even quantum, waves.

“For the case of electromagnetic waves, Maxwell’s equations have transformation laws that allow us to design special electromagnetic materials that steer light around a hidden region, returning it to its original path on the far side,” explained the University of Washington Walker Family Endowed Professor of Mathematics. “Not only would observers be unaware of the contents of the hidden region, they wouldn’t even be aware that something was being hidden. Such an object, which would have no shadow, is said to be ‘cloaked.’

“Cloaking works for any frequency of electromagnetic radiation,” Uhlmann emphasized. “Theoretically, you can cloak any shape you like, and you can make any object look like any shape you want it to look like.”

According to a 2006 Science article quoted by Uhlmann, “The Ultimate Camouflage,” “The real breakthrough may lie in the theoretical tools used to make the cloak. In such transformation optics, researchers imagine – a la Einstein – warping empty space to bend the path of electromagnetic waves. A mathematical transformation then tells them how to mimic the bending by filling un-warped space with a material whose optical properties vary from point to point.”

“But I wouldn’t hold your breath,” cautioned the white-bearded mathematician, looking suspiciously like Merlin. “The nano-level-dependent meta-materials with a negative refractive index and optical properties varying from point to point needed to create such ‘white holes’ will be so difficult to build, they might be experienced by your grandchildren. So, if longevity science enables you to live that long, they’ll still be able to see you,” he chuckled.

“The down side is, if you’re inside a cloaked area, you can’t see out. But you can put a sensor inside the area that can ‘see’ by using a resonance mode that temporarily destroys the cloaking effect.”

Uhlmann recalled the Navy’s exploitation of analogous “acoustic shadow” zones in the ocean to hide its submarines from enemy surface ships in World War II.

“As sound waves travel from the ocean’s warm upper layer into the deeper, colder water, they slow quickly and are bent, or refracted, downward, creating a sound-free ‘shadow zone’ in which a submarine can hide,” noted the American Academy of Sciences fellow. “These sound-free zones enable a sub or unmanned underwater vehicle positioned just beneath the dividing line between the warmer and cooler water layers to become invisible to enemy sonar signals and are analogous to the light-free zones around future cloaked objects.”

Possible future applications for electromagnetic cloaking are invisible optical cables, components for optical computers, invisible sensors, 3D video displays, artificially engineered magnetic monopoles, light beam collimation, and “tsunami cloaking” in which an object is protected from the effects of giant waves by not being “seen” by them.

The next GSEAS Distinguished Lecture will feature Dr. Andrea Bertozzi on Sept. 2, speaking on “Applied Mathematics in Defense Applications.”