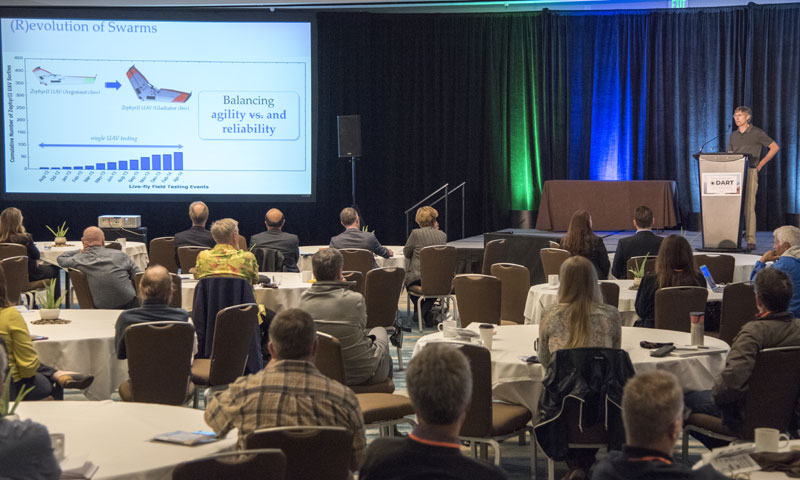 The rapidly-growing industry of drones and automation has taken to California’s Central Coast. To help drive regional research, development and collaboration, a consortium known as Monterey Bay Drone, Automation and Robotics Technology (DART) held its first symposium this summer, with researchers from the Naval Postgraduate School (NPS) participating in the new effort.

According to Josh Metz, the Economic Development Manager at the Ford Ord Reuse Authority and co-creator of Monterey Bay DART, the goal of the symposium was to take advantage of the area’s proximity to educational institutions, Silicon Valley and environmental organizations to drive collaboration on the interrelated technologies involved with drones.

The DART initiative is intended to align industry, academia and government in the Monterey area toward establishing and operating a world-class drone, automation, robotics technology testing and development cluster, said Metz.

With decades of research and experimentation in unmanned systems already, NPS brought a network of regional relationships to the discussion.

“NPS has always valued the research ecosystem formed when industry, academia, and the military services unite to innovate novel socio-technical solutions for today’s warfighters,” said NPS’ Robotics and Unmanned Systems Education and Research (CRUSER) Associate Director Dr. Carl Oros, one of NPS’ symposium speakers. “NPS researchers have more than 200 professionally published papers and theses on autonomous vehicles. The relationships NPS has created through this work uniquely positions us to be at the center of all types of autonomous systems activity as Monterey’s DART initiative emerges.”

“We have a space to do research, development and experimentation at Camp Roberts, and we would also like to do those types of things locally,” said Jones. “We want to not only work with industry and academia, but other non-governmental agencies to continue advancing autonomous systems experimentation.”

As a broad range of applications for drones on the Monterey Peninsula continues to expand, Monterey Bay DART organizers are already planning next year’s symposium to capitalize on the region’s unique advantages.

Today@NPS showcases some of the speakers, conferences, experiments, lectures, and other events that take place at the Naval Postgraduate School on a daily basis. If you would like more information about any of the highlighted activities please contact the Office of University Communications at pao@nps.edu.
January 2019 Title