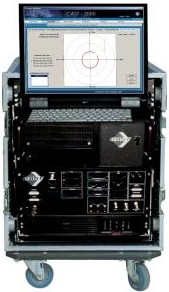 This project aimed at the development of a cost-effective and efficient laboratory facility for thoroughly evaluating the capability of GPS-based integrated navigation systems, including aerial delivery systems. The ability to test navigation system components, GPS receivers, IMU sensors, and software constitutes a critical part of the research and development process.

As the demand for GNSS products has increased, more receiver manufacturers and application developers have entered the market, GPS and GNSS simulators have increased became a bellwether for the GNSS industry, both mass market and professional. The term GPS simulator is widely used, encompassing something as simple as a piece of software outputting an NMEA position and velocity string. However, for professional OEM the term more usually refers to a device, which provides signals to the RF section of a GPS receiver, that is, as if the signals were coming from an antenna. In turn, a GNSS simulator provides signal characteristics for both existing systems, such as GPS or GLONASS, and systems in deployment, such as Galileo and QZSS. There are two techniques in common usage. The first records and replays the real-world RF signals from navigation satellites. The second uses software simulators combined with signal generators to replicate the RF signals of navigation satellites.

In CAST-2000 up to 32 GPS satellites producing C/A, P code, and M-noise on L1 and L2 can be simulated. Vehicle dynamics, multipath, and atmospheric conditions are user-configured and generated as part of simulation. The system under test (its GPS receiver) experiences the same RF inputs that would exist in an operational scenario, but in a controlled and repeatable laboratory environment. This capability allows analyzing dynamic performance and operational capability of any GPS-based navigation system at a detailed level that is not possible with the actual flight tests. In addition to this a lot of the tests could be replaced with just computer simulations, especially for the initial stage of development / testing of new systems. The system under test could be placed in any “virtual” location (war zones), and any constellation of up to 32 satellites (including the U.S. NAVSTAR GPS, Russian GLONASS, European Galileo and Chinese Beiduo) with associated environmental and orbit parameter errors can be simulated. The satellites can be made to appear and disappear at will, in order to test the acquisition and re-acquisition capability of the GPS receiver. In addition, interference, spoofing (for SA/AS equipped systems), multipath and clear environments can be modeled through computer controls.

The development environment also allows to investigate the use of auxiliary measurements (provided by barometric and radar altimeter, Doppler radar and attitude heading reference system). For the arial delivery systems it can also incorporate the YPG winds database to show the effect of changing winds as well. The vehicle models include a complete six degree of freedom models of a generic aircraft, UAV, parafoil-based delivery system, helicopter, armed vehicle, etc. This development environment can also be used in conjunction with another system that would allow receiving, visualizing and analyzing the real test (drop) data in real-time. In such a case along with a real (single) set of test data, we would have multiple “virtual” realizations of the same test showing what would happen if… GPS signal is jammed, spoofed, or some other elements of GPS-based integrated navigation system fail.