This research addressed the problem of determining the payload’s three-dimensional position and possibly attitude based on observations obtained by several fixed cameras on the ground. Figure A shows an example of surveyed camera sites for the combined Corral/Mohave drop zone (DZ), whereas Fig.B demonstrates an example of stabilized Kineto Tracking Mount (KTM) that is used to record the airdrop event from aircraft exit to impact. Figure B shows an operator seat (in the center) with multiple cameras (having different focal lengths). During the airdrop the operator manually points cameras at the test article. (Currently KTMs are controlled remotely.) All KTMs have azimuth and elevation encoders, which sample and record Az/El angles along with Coordinated Universal Time (UTC) for every frame. 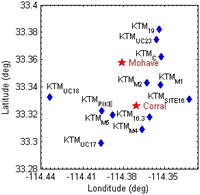 Figure A. Two drop zones (pentagons) with multiple KTM sites around them (rhombs).

Figure B. The KTM equipped with multiple cameras.

The reasons for having time, state and attitude information (TSPI) available for each test article are as follows:

Obviously, nowadays an inertial measurement unit (IMU) and/or global positioning system (GPS) receiver can be used to acquire accurate TSPI of any moving object. However, when applied to massive testing of different test articles there are several reasons preventing of using those modern navigation means. To start with, you cannot install IMU/GPS units on all test articles (there are to many of them). Second, the harsh condition of operating some of the articles will result in destroying IMU/GPS units at the end of each or every other test. Third, some of the test articles simply cannot accommodate IMU/GPS units either because of the size constraints (for instance, miniature air delivery systems, shells and bullets) or because of non-rigid structure of the object (canopies). Fourth, for parachute and parafoil systems the GPS signal is simply not available for the first 30 seconds of a ballistic flight after exiting an aircraft. All aforementioned reasons make using information, recorded by multiple KTMs for each test anyway, to determine TSPI of the test articles very relevant.

In addition to the papers on the video scoring, written by the NPS faculty and listed on the ADSC Publications page below you will find some more papers written by others and related to different pieces of software used/tested within this project