For the past 17 years, the Naval Postgraduate School (NPS) has offered a Scholarship for Service (SFS) program sponsored by the National Science Foundation for its master’s degree in computer science with a specialization in cybersecurity and cyber operations, providing a direct pathway to increase the size and diversity of the nation’s cybersecurity talent pool. 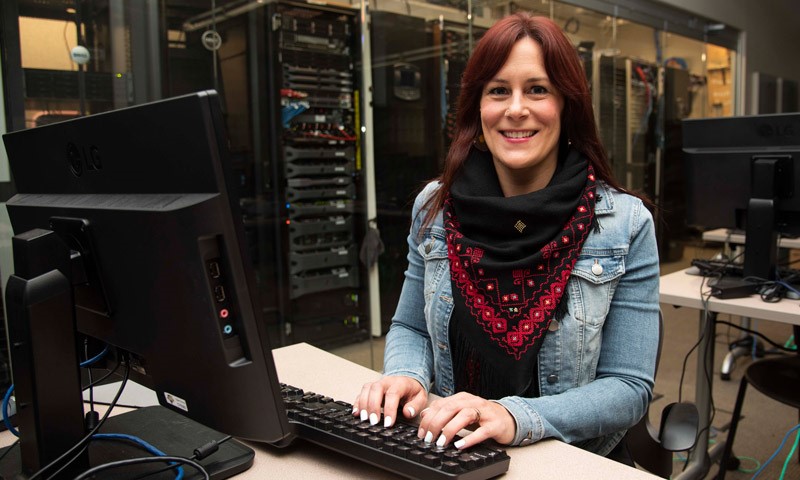 And through the scholarship’s "Monarch" option, the program has successfully transformed students from wildly-diverse backgrounds into respected leaders in the cybersecurity field, contributing across the national security space.

"I was not expecting this at all," said Wanic. "I worked very hard while I was here, and even though it is great to get recognition for that, at the same time, I know a lot of my peers are also doing great things and deserve recognition as well."

"I wanted to do something that combined my past experiences with what I am doing now," said Wanic. "I previously worked for the United Nations for seven years, and I felt like this was a great way to join the two together.

"It started when I attended a seminar with Dr. Neil Rowe, who brought up his work with different international perspectives of cyber security and warfare," she continued. "After talking to him, I was able to narrow it down to this specific topic."

Rowe, a professor in NPS’ Department of Computer Science, would go on to serve as Wanic’s thesis advisor on her research, who said one of the biggest challenges in

conducting this research was how to determine "different deterrence strategies and how they relate to different countries."

"All of our students come here and learn new areas of expertise, and Wanic was able to take all the technical work she did in the classroom and apply it to solve new problems that could make a difference at the policy level," said Rowe. "Most policy makers don’t understand too much on the difference between things such as nuclear and cyber deterrence, and Wanic’s thesis did a great job in clarifying that."

"During my last job in the Central African Republic, one of the things I was in charge of was the technology side of the mission, and we had people that wanted to bring in more drone surveillance and other advanced technologies. At the time I was uninformed about the specifics," admitted Wanic. "Over the course of several months, I got to know much more about the technology that was directed to the mission, and how nobody knew how to use it. This wasted opportunity made me think that, even in a really remote place, technology is critically important to everything that we are doing."

"In the beginning, I felt very lost because it was such a flood of new information, but with the help of classmates and professors and some hard work, I was able to succeed," said Wanic. "I have gotten so much out of my time at NPS, I’ve learned an entire universe of terminology and understanding about cybersecurity.

"Everyone can read news articles and hear what is being said, but to really understand what it all means has been really enlightening," she added. "I know a lot more now about the U.S. perspective on all of these issues, because that perspective is a lot more focused here [at NPS]. It leads to an experience that you just can’t get anywhere else."

"It is a lot of analyzing and looking at the overall picture, which is more along the lines of what I had been doing prior. I liked the fact that I am going to be able to combine this analysis type work with some more technical work," said Wanic.

"It’s a big step following my time at NPS and being recognized for my time here makes me proud, not only as a woman in a male-dominated field but as someone who is older starting a new career," she continued.

"No matter what your background is, if you work hard and have the capability, you can achieve anything," she added proudly.