Topographical Features: The Hindu Kush Range that forms from the central massif of Afghanistan bisects Bamyan, forming its most notable feature.

Bamyan Province is located in eastern Afghanistan. The population of approximately 400,000 are primarily Hazara, with 16% Sadat, 15% Tajik, and a variety of other ethnicities of lesser representation. Agricultural and animal husbandry is the primary occupation of inhabitants while day labor is secondary. Wheat, barley, potatoes remain the active crops.

The Governor, Mohammad Tahir Zahir, is an ethnic Hazara who has served in a variety of positions throughout the Afghan government. He commaned ground forces in Bamyan from 2001-2004 and was Ashraf Ghani's spokesperson during the 2014 election.

Zahir's appointment to the Governorship was met with strong resistance from local officials and the population based on accusations of incompetence and racial discrimination.11

Taliban Shadow Governor: A new shadow governor was reportedly appointed in February 2016, but his identity is unknown. 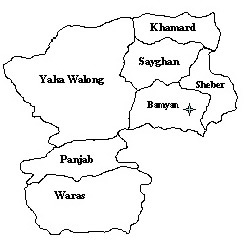 The Hazara, a distinct ethnic and religious group within the population of Afghanistan; they have often been the target of discriminatory and violent repression.  Most likely descended from the Mongols of Genghis Khan, (there is also a strong argument that they are of Eastern Turkic origin), the Hazara are noticeably different in physical appearance when compared to the Pashtun majority.  In terms of religion, the vast majority of the Hazara are of the Shia Muslim faith, again in contrast to the Pashtuns who are Sunni Muslim.  Due to these differences, “the Hazara have experienced discrimination at the hands of the Pashtun-dominated government throughout the history of modern Afghanistan."4 As the traditional underclass of Afghan society, Hazara were exploited and made to work as servants and laborers.  As a result, there tends to be an anti-government and anti-Pashtun bias among the Hazara.  In present day Afghanistan, the Hazara are divided geographically into two main groups: the Hazarajat Hazara and those who live outside the Hazarajat.  The Hazarajat is located in the Hindu Kush Mountains in central Afghanistan and is “centered around Bamiyan province and include[s] areas of Ghowr, Uruzgan, Wardak, and Ghazni province."5 The Hazara living outside of the Hazarajat live in and around Kabul, Herat, Mazar-e-Sharif and Samangan province.  Due to atrocities committed against them by the Taliban, the Hazara by and large are opposed to the Taliban.  In August 1998, the Taliban massacred approximately 4,000 Hazara in Mazara-e-Sharif; this massacre was followed by another the next month when the Taliban killed another 500 Hazara in Bamiyan.  The Hezb-e Wahdat (Islamic Unity Party of Afghanistan) is an umbrella political organization which commands the support of large numbers of Hazara.  The Hazara are also often at odds with the Kuchi population within the Hazarajat. View the Hazara Tribal Tree

Tajiks are the second largest ethnic group in Afghanistan, after the Pashtuns and comprise between 25-30% of the population. The Tajiks in Afghanistan tend to live in settled communities as opposed to a nomadic lifestyle. They are of Iranian descent and primarily speak Dari. The majority of Tajiks are Sunni Muslims. Tajiks made up the majority of the Northern Alliance, both in terms of membership and leadership. Tribal ties have largely broken down among the Tajiks; therefore, social organization is defined primarily by geography. Despite their lack of cohesiveness the Tajiks are often brought together due to the perceived common threat posed by the Pashtuns. View the Tajik Tribal Tree

The first Central Asian Muslims to come under the Russian yoke, Tatars still retain their own republic within the Russian Federation. During the colonial era they were often used as spies and guides for Russian and later Soviet efforts, and were heavily involved in commercial activities. In Afghanistan, many of the Tatars settled after either trying to escape the Russians, or as traders. In Bamiyan, they are primarily found in Sheber District. View the Tatar Tribal Tree

The Qizilbash are an Imami Shia group thought to be descended from Persian “mercenaries and administrators left behind by the Safavid Emperor Nadir Shah Afshar to govern the Afghan provinces."6 After the demise of the Safavid Empire in Afghanistan, the Qizilbash, due to their higher levels of education and experience as administrators, remained influential in the Afghan court and government bureaucracies.  Their Shia faith combined with their disproportionate political influence often resulted in resentment by large portions of the Sunni majority within Afghanistan.7 Also, they were used by the shahs as personal bodyguards and assigned to put down uprisings among the populace, which further alienated them from the Pashtun majority.  Due to the persecution, religious and political, the Qizilbash frequently resorted to the use of taqiyya, the practice of precautionary dissimulation or the adoption of a dual religious identity.  In order to play a role in government and society, the Qizilbash, like other Imami Shia, publicly portrayed themselves as Sunnis or Pashtuns while they privately maintained their Shia faith.8 In present day Afghanistan, the Qizilbash continue to practice taqiyya making it difficult to gain accurate census data.  It appears that they largely reside in urban centers and “tend to be predominantly urban professionals—doctors, teachers, engineers, and lawyers."9

The largest single ethnicity of Afghanistan, the Pashtun, and in particular the largest tribe of said, the Ghilzai, formed the backbone of the Taliban movement. Traditionally beholden to the moral code of Pashtunwali (“the way of the Pashtun”), they can easily be deeply offended by breaches of the code and carry the grudge for generations. The Pashtuns are fiercely independent and often view themselves, as the largest ethnicity in the country, as the rightful leaders of Afghanistan. That being said, they suffered much during the Soviet invasion, and must be included in any effort to secure and develop the country. Many of the Pashtuns in Bamiyan are Kuchis, nomads who have traditionally been accused of poaching Hazara land, especially during the Taliban era.

Involved in a constant and centuries old range war with the Hazara, the Kuchi are Pashtun nomads. Drawn primarily from the Ghilzai tribe, the Kuchis have moved across Afghanistan and Pakistan for generations, and only since Pakistani independence were banned from Pakistani territory. Dispersed and well-traveled, they often receive news from distant relations in far-away provinces relatively quickly. The self-declared “leader” of the Kuchis is one Hashmat Ghani Ahmadzai. Partially settled by the king and the following socialist governments, they were strong supporters of the Taliban, both ideologically and pragmatically, as they came into possession of many Hazara lands thanks to the repression of the Shi’ite Hazara by the Taliban. There are estimated to be around three million Kuchi in Afghanistan, with at least 60% remaining fully nomadic.10 In Bamiyan, they are primarily in the South.

Claiming descent from the family of the Prophet (PBUH), the Sayyids hold a revered place in Afghanistan. The Sayyids are of Arab descent and have a tightly held lineage. What makes them of particular interest in Bamyan is that for the most part they are Shi’a Muslims, where as in the rest of Afghanistan they are primarily Sunnis. The few that do inhabit Bamiyan live for the most part in Kahmard.

A Shi’a party originally led by Muhammad Asif Muhsini, the Harakat-e Islami fought the Soviets with support from Tehran. Known for having many Hazara as well as non-Hazara members, this Shiite party refused to join the Hazara coalition Hizb-e Wahdat in the ensuing civil war. Since 2005 they have been led by Hojjatolislam Seyyed Muhammad Ali Jawed, a minister in Karzai’s first cabinet. National Directorate of Security Chief Brigadier General Waziq is a large player in this party.

This party is under the guidance of one Abdul Rasool Sayyaf, and has been since the anti-Soviet campaign. Despite ideological and cultural similarities with the Taliban, Sayyaf did not join them (for personal reasons) and went with the Northern Alliance. He follows strict Wahhabi interpretations of Islam, and is not known for tolerance. In the past this party has been known for its foreign supporters and followers; the former often Arab, the latter from places as diverse as the Southern Philippines, Chechnya, and Bosnia.  In February 1993 government forces and members of the Ittihad-e Islami massacred over 700 Hazara in the Afshar district of West Kabul.

The Shiite umbrella party, Hizb-I Wahdat is composed of seven of the eight Shiite parties (minus the Harakat-e Islami) that existed in Afghanistan from the time of the anti-Soviet campaigns. Now led by Wolesi Jirga member (and former planning minister) Hajji Muhammad Mohaqqeq, the party continues to represent both Shiites and Hazaras. During the period of Taliban rule, the party held fast in the Hazarajat whilst the Taliban tried through blockade to bring the Hazaras to their knees through starvation.