Occupation of Population: Agriculture, Labor, some Animal Husbandry and Trade.1

Primary Roads: Only 7% of roads are accesible by car or animal year-round; Primary Roads- From Yakawlang to Tirin Kot, a main road runs from North-South through Khadr and Gezab.

Sources/Availability of Drinking Water: 68% have direct access to a water source, only 3% have safe drinking water via Rivers and Wells. Approximately 25% of the population travels an hour or more to a water source.

Rivers: The Helmand and the Helmand's tributary, the Khud.

Dai Kundi Province is located in central Afghanistan. The province is bordered by Uruzgan in the south, Ghazni and Bamiyan in the east, Ghor in the north and west, and a small southeast portion bordering Helmand. Dai Kundi was part of Uruzgan province until March 2004. The topography is distinguished by roughly 90 percent of mountainous terrain split by The Helmand River.

The population of over 477 thousand are primarily Hazara. With a minority of Pashtun, Baluch, and Sayeed. Major tribal groups include the Bacha Ghulam, Dai Kundi, Sheikh Miran, Dai Zangi, Achekzai, and Alizai. Primary occupations within Dai Kundi are agriculture and day labor.

The Governor of Dai Kundi is Masooma Muradi as of June 2015. She is currently Afghanistan's only female governor. She was born in 1979 in Kandahar Province. Muradi has fought to remain in her position in the face of significant political opposition to having a woman in the Governor's office.9 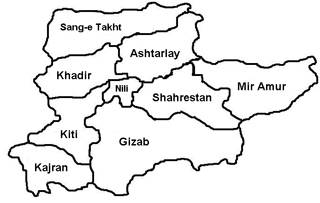 Durrani Pashtuns, they exist primarily in Gizab District. Formerly part of the Barakzai grouping, the Achekzai were separated from the rest of the tribe by Ahmad Shah Durrani for management purposes, and the Achekzai remained one of the most troublesome tribes in the area. Traditionally nomadic, they further divide themselves into two large sub-groupings, the Gujanzais and the Badinzais, and had a reputation for disunity and predation.

They form a major branch of the Panjpay Durrani Pashtuns with two main sub-tribes, Jalozai and Hasanzai. Other subtribes include the Shekzai, the Guerazai, the Adozai, the Pirzai, the Alekzai, and the Habizai. Clashes between the Jalozai and Hasanzai have been a major source of tension in northern Helmand province. Present Helmand Governor Sher Mohammad Akhundzada is Jalozai. They live primarily in Kijran and Mir Amur districts.

In Sang-e Takht district. The name seems to mean “boy of the manor."6 They are a subtribe of the Dai Zangi, and they include the divisions Bubak, Gaoshak, Ghulam Ali, Ismail, Kaum-i-Barfi, Kaum-i-Mizra, Kaum-i-Yari, Neka, Shah Masid, and Waras.

Forming the majority in Day Kundi District, the Hazara, a distinct ethnic and religious group within the population of Afghanistan, have often been the target of discriminatory and violent repression. Most likely descended from the Mongols of Genghis Khan, the Hazara are noticeably different in physical appearance when compared to the Pashtun majority. In terms of religion, the vast majority of the Hazara are of the Shia Muslim faith, again in contrast to the Pashtuns who are Sunni Muslim. Due to these differences, “the Hazara have experienced discrimination at the hands of the Pashtun-dominated government throughout the history of modern Afghanistan."7 As the traditional underclass of Afghan society, Hazara were exploited and made to work as servants and laborers. As a result there tends to be an anti-government and anti-Pashtun bias among the Hazara. In present day Afghanistan, the Hazara are divided geographically into two main groups: the Hazarajat Hazara and those who live outside the Hazarajat. The Hazarajat is located in the Hindu Kush Mountains in central Afghanistan and is “centered around Bamiyan province and include[s] areas of Ghowr, Uruzgan, Wardak, and Ghazni province."8 The Hazara living outside of the Hazarajat live in and around Kabul, Herat, Mazar-e-Sharif and Samangan province. Due to atrocities committed against them by the Taliban, the Hazara by and large are opposed to the Taliban. In August 1998, the Taliban massacred approximately 4,000 Hazara in Mazara-e-Sharif; this massacre was followed by another the next month when the Taliban killed another 500 Hazara in Bamiyan. The Hezb-e Wahdat (Islamic Unity Party of Afghanistan) is an umbrella political organization which commands the support of large numbers of Hazara. The Hazara are also often at odds with the Kuchi population within the Hazarajat.

1 "Provincial Profile," Day Kundi, Ministry of Rural Rehabilitation and Development and the Naitonal Area Base Development Programme, 2006, at Link.

2 "Provincial Profile," Day Kundi, Ministry of Rural Rehabilitation and Development and the Naitonal Area Base Development Programme, 2006, at Link.

3 "Provincial Profile," Day Kundi, Ministry of Rural Rehabilitation and Development and the Naitonal Area Base Development Programme, 2006, at Link.

4 "Provincial Profile," Day Kundi, Ministry of Rural Rehabilitation and Development and the Naitonal Area Base Development Programme, 2006, at Link.

5 "Provincial Profile," Day Kundi, Ministry of Rural Rehabilitation and Development and the Naitonal Area Base Development Programme, 2006, at Link.