Population with Access to Electricity: Less than 10%; Mainly originates in Iran's Khorasan Province.4

Farah Province is located in Afghanistan's southwestern region and shares its borders with Helmand to the east, Nimroz to the south, Ghor and Herat to the north and Iran to the west. Farah is one of Afghanistan’s largest provinces (48,471 sq. kilometers, 18, 715 sq. miles) but is sparsely populated for its size. A critical leg of the “ring-road” highway (Highway 1) going from Herat to Kandahar to Kabul cuts through Farah but is now labeled one of the most dangerous stretches due to the exuberant number of criminal and insurgent incidents. None of the districts in the province are currently accessible by road due to the high presence of criminals and insurgents operating throughout the province, according to a report by the UN drafted in October 2008.

Farah’s population is dominated by Pashtun (80%) tribesmen (Alizai, Barakzai,Noorzai) although Tajiks and a small minority of Shi’a Hazaras can also be found in the countryside. Poppy has taken precedence as the number one crop grown in the province with cultivation doubling between 2006 (7694 hectares) and 2007 (14,865 hectares). Bakwa and Farah districts make up the bulk of critical poppy growing areas. Insurgent activity has increasingly plagued the Bakwa, Gulistan, Bala Baluk and Khaki-Safed districts.

Police corruption has also played a significant role in the deterioration of Farah’s security although recent actions by the Afghan government and Coalition forces have clamped down on such behavior. In April 2008, construction began on a sprawling ANA Brigade Headquarters outside Farah City that will eventually house over 2,000 soldiers upon its completion. The base, employing 4,000 laborers during its construction, is expected to be completed during the summer of 2009. Farah was the recipient of some $85 million during 2008 for a variety of construction projects. Some of the projects include the construction of eight ANP headquarters and a Border Police headquarters facility.

The current Governor of Farah is Mohammad Asig Nang. Nang was appointed in January 2015 by President Ashraf Ghani. He is an ethnic Pashtun from Paktia province. He was arrested in July 2007 for publishing extracts from a Canadian essay that painted Hamid Karzai  in an unflattering light. The piece, "Wars and globalization: Who did 9/11 benefit?" alleged Karzai was a puppet of US interests.12 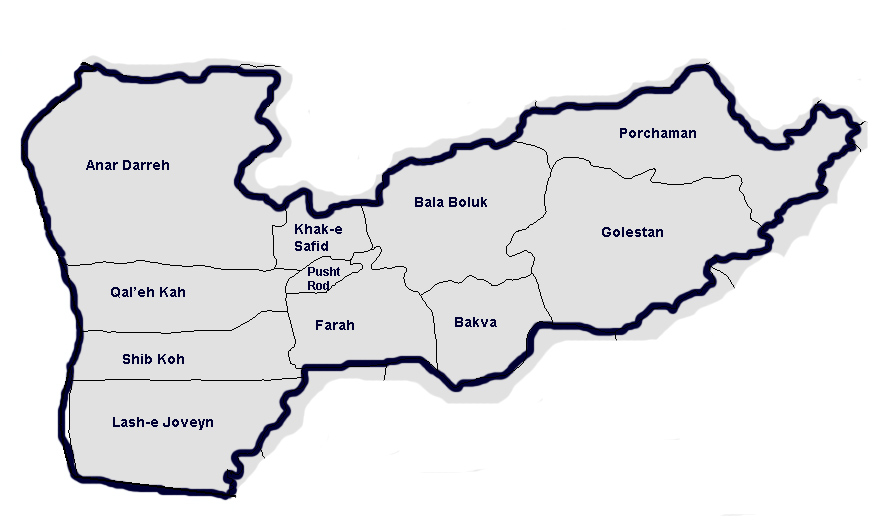 Pashtuns are located throughout the districts of Farah province. The largest single ethnicity of Afghanistan, the Pashtun, and in particular the largest tribe, the Ghilzai, formed the backbone of the Taliban movement. Traditionally beholden to the moral code of Pashtunwali (“the way of the Pashtun”), they can be deeply offended by breaches of the code and remember the breach for generations. The Pashtuns are fiercely independent. As the largest ethnicity in the country, the Pashtuns consider themselves the rightful leaders of Afghanistan and must be included in any efforts to secure and develop the country. They suffered much during the Soviet invasion.

Major branch of the Panjpay Durrani Pashtuns with two main sub-tribes, Jalozai and Hasanzai. Clashes between the Jalozai and Hasanzai have been a major source of tension in northern Helmand province. The feud between Abdul Wahid and the father of Sher Mohammad dates back to the Jihad period.

Durrani Pashtuns, they rose to prominence with Dost Mohammad Shah (the British East India Company’s adversary in the first Anglo-Afghan War) and furnished a string of kings through the current aspirant to the throne, Heir Apparent Ahmad Shah. Accordingly, they are one of the most respected tribes in the country.

Although usually categorized and self-identified as Panjpay Durranis, many Zirak Durranis dismiss the Noorzai as Ghalji or Ghilzai, not Durrani at all. At this point in time, it is not clear whether this is a long-standing belief or has arisen out the turmoil of the past three decades, particularly the close partnership between the Noorzai and the Ghalji-dominated Taliban leadership. Given the numbers and importance of the Noorzai in the south, this attitude may have consequences for long-term tribal politics in southwestern Afghanistan.

The Baluch, thought to number over a million in Afghanistan, are an Indo-Iranian ethnic group spread over Afghanistan, Pakistan, and Iran. Significant numbers also exist in other countries. In Pakistan, Baluchi independence groups have fought with Islamabad over the revenues from natural resources in Baluchistan. The capital of the Pakistani province Baluchistan is Quetta, where many of the Taliban are thought to have fled after their fall from power Kalat, south of Quetta, has traditionally been the seat of the Baluch Khans. The Baluch are overwhelmingly but not entirely Sunni Muslims. Their feudal power-structures headed by khans, are generally perceived to be more concentrated than those of the more decentralized Pashtuns. In Afghanistan they are primarily nomadic, roaming the southernmost districts of the three southernmost provinces with small numbers present in southern Farah Province.

Tajiks are the second largest ethnic group in Afghanistan after the Pashtuns and comprise between 25-30% of the population. The Tajiks in Afghanistan tend to live in settled communities. Pashtuns refer to them as Farsiwan, or speakers of Farsi, the lingua franca of Afghanistan (50% of Afghanistan speaks Farsi, as opposed to only 35% for Pashtu). There has been significant animosity between the Tajiks and Pashtuns in recent years. Forming the backbone of the Northern Alliance,. they held out fiercely against the Taliban. Most Tajik are Sunni Muslims, but a few are Shi’a. Tajiks made up the majority of the Northern Alliance, both in terms of membership and leadership. Tribal ties have largely broken down among the Tajiks; therefore, social organization is defined primarily by geography. Despite their lack of cohesiveness the Tajiks are often brought together due to the perceived common threat posed by the Pashtuns.6 In Farah Province, Tajiks reside primarily in Farah District and are interspersed among the Pashtun in the western districts.

The Hazara are a distinct ethnic and religious group within the population of Afghanistan who are often the target of discriminatory and violent repression. Most likely descended from the Mongols of Genghis Khan, (there is also a strong argument that they are of Eastern Turkic origin), the Hazara are noticeably different in physical appearance when compared to the Pashtun majority. The vast majority of the Hazara are of the Shia Muslim faith. Due to these differences, “the Hazara have experienced discrimination at the hands of the Pashtun-dominated government throughout the history of modern Afghanistan."7 As the traditional lower class of Afghan society, Hazara work for Pashtuns as servants and laborers resulting in an anti-government and anti-Pashtun bias among the Hazara. In present day Afghanistan, the Hazara are divided geographically into two main groups: those who live in and outside the Hazarajat region. The Hazarajat is located in the Hindu Kush Mountains in central Afghanistan and is “centered on Bamiyan province and include[s] areas of Ghowr, Uruzgan, Wardak, and Ghazni province."8 The Hazara living outside of the Hazarajat live in Kabul, Herat, Mazar-e Sharif and Samangan province. . The few Hazara in Farah Province are in the far northeastern corner of the province in Por Chaman District. In August 1998, the Taliban massacred approximately 4,000 Hazara in Mazara-e Sharif; this massacre was followed by another the next month when the Taliban killed another 500 Hazara in Bamiyan. Due to the atrocities committed against them by the Taliban, the Hazara by and large are opposed to the Taliban. The Hezb-e Wahdat (Islamic Unity Party of Afghanistan) is an umbrella political organization which commands the support of large numbers of Hazara. The Hazara are also often at odds with the Kuchi population within the Hazarajat

The Aimak are a Persian-speaking nomadic or semi-nomadic tribe of mixed Iranian and Mongolian descent who inhabit the north and north-west highlands of Afghanistan and the Khorasan Province of Iran.9 They are closely related to the Hazara, and to some degree the Tajiks. They live in western Hazarajat in the provinces of Ghor, Farah, Herat, Badghis, Faryab, Jowzjan and Sar-e Pol. The term Aimak derives from the Mongolian term for tribe (Aimag). They were originally known as chahar or the four Eimaks, because there were four principal tribes: the Taimani (the predominating element in the population of Ghor), the Ferozkhoi, the Temuri, and the Jamshidi. The best estimates of the Aimak population in Afghanistan hover around 1-2 million. The tally is made difficult since, as a consequence of centuries of oppression of the Hazara people in Afghanistan, some Aimagh Hazaras are classified by the state as Tajik, or Persian instead of Aimaks.

The Chanar Aimaks are believed to be of Turco-Mongolian origin. This assessment is based on their physical appearance and the style of dwellings they utilize which closely resemble Mongolian style yurts. The Chanar speak a Persian dialect (Dari) unlike their Turco-Mongolian kinsmen in other areas.10 Farah's Chanar are located in Por Chaman District.

A Shia party originally led by Muhammad Asif Muhsini, the Harakat-e Islami fought the Soviets with support from Tehran. Known for having many Hazara as well as non-Hazara members, this Shiite party refused to join the Hazara coalition Hizb-i Wahdat in the ensuing civil war. Since 2005 they have been led by Hojjatolislam Seyyed Muhammad Ali Jawed, a minister in Karzai’s first cabinet.

Led by Gulbuddin Hekmatyar, HiG is Mujahideen party active since the Soviet invasion. Famous for its shifting loyalties, HiG was the favorite party of Pakistan’s ISI until the rise of the Taliban. Former members continue to wield considerable influence. Thus far, HiG has been actively opposed to US-led and Afghan national forces. Hekmatyar is a Kharoti Ghilzai. In Nangarhar, he is less influential than the much more respected and powerful Khugianis, such as Haji Din Mohammad and Anwarul Haq Mohammad.11

Primarily (but not exclusively) a Pashtun party, Mahaz-e Melli are followers of the Sufi holy man Pir Ishaq Gailani. It has a reputation for moderate thought and the traditional, mystical and introspective tenets that characterize Sufism.

Violence in southern Afghanistan has spread to Farah province in recent months in the form of roadside bombs, ambushes, highly destructive raids by hundreds of Taliban fighters and high profile assassinations. Violent activity usually associated with Helmand and Kandahar provinces have become more common in Farah indicative of the spread of Taliban influence in this previously quiet province.

Farah province includes 1,600 ISAF soldiers, inlcuding US, Spanish, and Italian troops in addition to ANA and ANP forces who are based Farah City. The main highway from Kabul to Kandahar (Highway 1) continues westward through Farah and eventually cuts north into Herat. Previously, violence in Helmand and Kandahar has disrupted this vital highway’s flow from time to time, but recent Taliban actions have spread into Farah’s stretch of Highway 1. Currently poppy is the most important crop in Farah. Localized Taliban pressure combined with government sponsored poppy eradication programs have pushed impoverished residents of Farah into the arms of the growing insurgency.

Enemy Tactics in Order of Commonality:

Enemy Targets in Order of Commonality:

Back to Western Afghanistan