Estimated Population with Access to Electricity: 56%; Little access to electricity outside of Ghazni City, most electricity is private.

Topographical Features: Arid and level towards the Southeast, more mountainous and wet towards the Northwest. Two significant lakes: Nawur in the North, and Nawa in the South.

Ghazni Province is located in eastern Afghanistan, on the Afghanistan - Pakistan border. The topography of Ghazni is composed of arid and level land towards the southeast and more wet and mountainous territory in the northwest. There are two significant lakes: Nawur in the north and Nawa in the south.

The population of approximately 1 million are divided at 49% Pashtun, 45% Hazara, 4% Tajik, and around 1% Hindu / Sikh, with other varying minorities. Agriculture and animal husbandry are the primary occupation of the citizens of Ghazni. Wheat, alfalfa, melons, and almonds are among the largest crops produced.

Taliban Shadow Governor: Mullah Mohammad Qasim was said to have been killed by an airstrike in June 2016. However, this claim is challenged by the Taliban.5 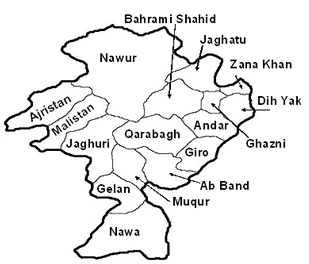 The Hazara, a distinct ethnic and religious group within the population of Afghanistan; they have often been the target of discriminatory and violent repression.  Most likely descended from the Mongols of Genghis Khan, (there is also a strong argument that they are of Eastern Turkic origin), the Hazara are noticeably different in physical appearance when compared to the Pashtun majority.  In terms of religion, the vast majority of the Hazara are of the Shia Muslim faith, again in contrast to the Pashtuns who are Sunni Muslim.  Due to these differences, “the Hazara have experienced discrimination at the hands of the Pashtun-dominated government throughout the history of modern Afghanistan."2 As the traditional underclass of Afghan society, Hazara were exploited and made to work as servants and laborers.  As a result, there tends to be an anti-government and anti-Pashtun bias among the Hazara.  In present day Afghanistan, the Hazara are divided geographically into two main groups: the Hazarajat Hazara and those who live outside the Hazarajat.  The Hazarajat is located in the Hindu Kush Mountains in central Afghanistan and is “centered around Bamiyan province and include[s] areas of Ghowr, Uruzgan, Wardak, and Ghazni province."3 The Hazara living outside of the Hazarajat live in and around Kabul, Herat, Mazar-e-Sharif and Samangan province.  Due to atrocities committed against them by the Taliban, the Hazara by and large are opposed to the Taliban.  In August 1998, the Taliban massacred approximately 4,000 Hazara in Mazara-e-Sharif; this massacre was followed by another the next month when the Taliban killed another 500 Hazara in Bamiyan.  The Hezb-e Wahdat (Islamic Unity Party of Afghanistan) is an umbrella political organization which commands the support of large numbers of Hazara.  The Hazara are also often at odds with the Kuchi population within the Hazarajat. View the Hazara Tribal Tree

The largest single tribe of the Pashtun ethnicity, the Ghalji or Ghilzai, and in particular the Hotaki clan, formed the backbone of the Taliban movement. Long resentful of the power the Duranni tribe (of which Karzai and Zahir Shah are members), the Ghilzai are fiercely independent and often view themselves, as the largest grouping of Pashtuns in the country and the rightful leaders of Afghanistan. View the Ghilzai Tribal Tree

Involved in a constant and centuries old range war with the Hazara, the Kuchi are Pashtun nomads. Drawn primarily from the Ghilzai tribe, the Kuchis have moved across Afghanistan and Pakistan for generations, and only since Pakistani independence, were banned from Pakistani territory. Dispersed and well-traveled, they often receive news from distant relations in far-away provinces relatively quickly. The self-declared “leader” of the Kuchis is one Hashmat Ghani Ahmadzai. Partially settled by the king and the following socialist governments, they were strong supporters of the Taliban, both ideologically and pragmatically, as they came into possession of many Hazara lands thanks to the repression of the Shi’ite Hazara by the Taliban. There are estimated to be around three million Kuchi in Afghanistan, with at least 60% remaining fully nomadic.4

Long a part of the commercial life of Afghanistan, Hindus and Sikhs have lived in the country for centuries as traders and money-lenders. During the time of the Taliban they were harassed and forced to wear identifying badges, and as a result many left the country. Since the beginning of OEF, however, many have returned to Afghanistan and their previous vocations.

The party of former Mujahid and prime minister Gulbuddin Hekmatyar, HiG was famous for its shifting loyalties, and was the favorite party of Pakistan’s ISI until the rise of the Taliban. Former members continue to wield considerable influence in the province. Faizanullah Faizan was an HiG commander during the civil war.

A Shi’a party originally led by Muhammad Asif Muhsini, the Harakat-e Islami fought the Soviets with support from Tehran. Known for having many Hazara as well as non-Hazara members, this Shi’ite party refused to join the Hazara coalition Hizb-i Wahdat in the ensuing civil war. Since 2005 they have been led by Hojjatolislam Seyyed Muhammad Ali Jawed, a minister in Karzai’s first cabinet.

This party is under the guidance of Abdul Rasool Sayyaf, and has been since the anti-Soviet campaign. Despite ideological and cultural similarities with the Taliban, Sayyaf did not join them (for personal reasons) and sided with the Northern Alliance. Sayyaf follows strict Wahhabi interpretations of Islam. In the past this party has been known for its foreign supporters and followers; the former often Arab, the latter from places as diverse as the Southern Philippines, Chechnya, and Bosnia. In February 1993, government forces and members of the Ittehad-e Islami massacred over 700 Hazara in the Afshar district of West Kabul.

The Shi’ite umbrella party, Hizb-I Wahdat is composed of seven of the eight Shi’ite parties (minus the Harakat-e Islami) that existed in Afghanistan from the time of the anti-Soviet campaigns. Now led by Wolesi Jirga member (and former planning minister) Haji Muhammad Mohaqqeq, the party continues to represent both Shi’ites and Hazaras. During the period of Taliban rule, the party held fast in the Hazarajat whilst the Taliban tried through blockade to bring the Hazaras to their knees through starvation.

Primarily (but not exclusively) a Pashtun party, followers of the Sufi holy man Pir Gailani have a reputation for moderate thought and the traditional mystical and introspective religious currents that characterize Sufism in that sect.

Back to Eastern Afganistan