Religious Groups: Sunni, some Shi'a, some Hindu, Some Sikh.

Topographical Features: Desert in the south, hills in the north, mountainous terrian along Pak border in Spin Boldak.

Kandahar Province is located in southern Afghanistan. Kandahar borders Pakistan in the east and south, Uruzgan and Zabul provinces in the north, and Helmand in the west. The topography is composed of deserts in the south, hills in the north, and mountainous terrain along the Pak border in Spin Boldak.

The population of over 1 million are primarily Durrani and Ghilzai Pashtun. There are also Baluch, Hazara, Tajik, and a variety of other ethnicities typically referred to as Farsiwan (those who speak Farsi / Dari). Primary occupations within Kandahar are agriculture and animal husbandry, while narcotics production remains a highly profitable but illegal profession. In 2007, there were 365 provincial aid projects conducted in the area with over $US 39 million in planned costs. A number of NGOs are active in Kandahar.

Militant activity remains a problem in Kandahar province despite increases in security over the past few years. In October 2016, Taliban fighters launched an assault on Maidan Shar and severed the highway linking Kabul and Kandahar.8

Dr. Humayun Azizi was appointed by Afghan President Ashraf Ghani as the Governor of Kandahar Province in April 2015. He received his education in France. Azizi has spent part of his career in the medical field, starting at the Burns unit in the Herat hospital. Since then, Dr. Azizi has worked in various governmental offices, including as the Minister of Parliamentary Affairs from 2010 till 2015.

Azizi has had conflicting perspectives on democracy in Afghanistan. In 2009, he is quoted telling a reporter that "Now there is democracy, and this is why [Afghanistan] is difficult to control... It's bad. Democracy is not a postcard that you can send from the United States to countries like Afghanistan and Iraq."6

Taliban Shadow Governor: Haji Lala - Afghan forces claimed to have killed Haji Lala and his deputy, Ahmad Shah, along with 43 Taliban fighters in May 2016. However, the Taliban has contested this claim.7 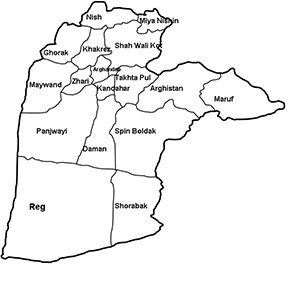 Formerly part of the Barakzai grouping, the Achekzai were separated from the rest of the tribe by Ahmad Shah Durrani for management purposes, and the Achekzai remained one of the most troublesome tribes in the province. Traditionally nomadic, they further divide themselves into two large sub-groupings, the Gujanzais and the Badinzais, and had a reputation for disunity and predation. They now primarily live in Spin Boldak District.

The Alkozai are the biggest tribe in Kandahar and currently the most vulnerable tribal group due to the recent killings of their most important leaders: Mullah Naqibullah Akhund (Mullah Naqib, an ex-jihadi commander); Mohammad Akram Khakriz Wal, The Head of Police of Kandahar province; Haji Gurrani (ex HiG commander); the brother of Haji Gul Ali (ex-jihadi commander of Mahaz); Haji Abdel Hakim Jan (ex-jihadi commander for Mahaz). Mullah Naqib was politically astute and had good relations with all influential individuals in Kandahar with the exception of Gul Agha Sherzai. In addition, he had good links to the provincial and central government as well as Rabbani (Jamiat) who he fought for during the mujahideen years. In Arghandab district, some 80% of the 130,000 residents are Alokozai. The tribe has had difficulties in recent years as mentioned above, and some Alokzai see a Barakzai-Popalzai union acting against their interests both politically and economically, especially following allegations of land-grabs in Arghandab by Ahmed Wali Karzai (Popalzai).

The Baluch, thought to number over a million in Afghanistan, are an Indo-Iranian ethnic group spread over Afghanistan, Pakistan, and Iran. Significant numbers also exist abroad. In Pakistan, Baluchi independence groups have fought with Islamabad over the revenues from natural resources in Baluchistan. The capital of Pakistani Baluchistan is Quetta, where many of the Taliban are thought to have fled after their fall from power, but Qalat, further south, has traditionally been the seat of the Baluch Khans. The Baluch are overwhelmingly but not entirely Sunni Muslims. Their power-structures, based on the khan, are generally perceived to be more concentrated than those of the more fractious Pashtuns. In Afghanistan they are primarily nomadic, roaming the southernmost districts of the three southernmost provinces. In Kandahar they are found mostly in Shorabak and Reg districts. View the Baluch Tribal Tree

From the Zirak division of Durrani Pashtuns, the Barakzai primarily inhabit the (relatively) quiet districts of Arghistan and Maruf. They rose to prominence with Dost Mohammad Shah (the British East India Company’s adversary in the first Anglo-Afghan War) and furnished a string of kings through the current aspirant to the throne, Heir Apparent Ahmad Shah.Accordingly, they are one of the most respected tribes in the country. Currently, the Barakzai make up a key element of the political power structure in Kandahar. The former Governors Gul Agha Sherzai and Khalid Pashtun are both Barakzai as well as Noorulhaq Olumi who has a separate powerbase from Sherzai and Khalid Pashtun.

The Popalzai resemble the Barakzai in terms of political influence in Kandahar, especially outside Kandahar-city. The Popalzai are the tribe of President Hamid Karzai, which is headed in Southern Afghanistan by his half-brother Ahmad Wali Karzai who also heads the Kandahar Provincial shura, thereby holding influence over power-holders in the district. The Popalzai are also influential in neighboring Uruzgan province in Helmand and they try to build alliances to Zabul leaders as well.
Although originally a Barakzai sub tribe, the Mohamadzai have become a tribe in its own right. The Mohammdazi allegedly originate in the Arghistan district, since the grave of Mohammad Baba is located there, but Mohamadzai can be found throughout Kandahar province. They are still close to the Barakzai tribe and have formed political alliances with the Barakzai.

A Durrani Pashtun tribe found almost exclusively in the district of Shorawak in southern Kandahar province.  There appears to be little ethnographic literature on the Barech beyond the observations of some 19th and early 20th century British civil and military personnel (see Adamec, Historical and Political Gazetteer of Afghanistan, Vol. 5, Kandahar and South-Central Afghanistan” 1980, Akademische Druck-u.Verlaganstalt, Graz-Austria).  Despite the Barech claims of Durrani kinship (see Pashtun Genealogies attached), there is reason to believe that the Barech have a different ethnic origin, perhaps Baloch, and transferred their ethnic/tribal identity during a shift in the power balance between the Kingdom of Afghanistan and the Emirate of Qalat.

Numbering around a quarter million in Afghanistan, almost entirely in Kandahar, the Brahui are a small tribal group more usually found in Pakistan’s Baluchistan province. Predominantly Sunni, Brahui are descended from Dravidian tribes that once spanned across India before the Aryan invasions of 2,000 to 3,000 years ago. The Brahui language still retains the Dravidian grammatical structure, although most vocabulary is at this point Indo-Iranian in origin. Having lived amongst the Baluch for centuries, they are in many cases indistinguishable, and even provided the Khans of Qalat. In Kandahar they primarily inhabit Shorabak District.

Although usually categorized and self-identified as Panjpai Durranis, many Zirak Durranis dismiss the Noorzai as Ghalji or Ghilzai, not Durrani at all.  At this point in time, it is not clear whether this is a long-standing belief or has arisen out the turmoil of the past three decades, particularly the close partnership between the Noorzai and the Taliban leadership.  Given the numbers and importance of the Noorzai in the south, this attitude may have consequences for long-term tribal politics. Some influential Noorzai tribesmen hold key positions in the Kandahar Provincial government, including Aref Noorzai and his brother Brigadier Mirwais Noorzai who formerly served as Kandahar’s Provincial Chief of Police. Esham Noorzai, who is the deputy leader of the provincial council, is also a Noorzai and is the cousin of Aref and Mirwais. Other influential Noorzai include the former commander Ustad Abdul Halim and Hajji Bashir Noorzai, a former Hezb-i-Islami (Khalis) commander and supporter of the Taliban. He was incarcerated in the United States in 2008 on drug trafficking charges.

The Ghilzai have somewhat been pushed into the position of a political underdog in Southern Afghanistan, especially during the current regime. Nevertheless, at least historically, several of the Ghilzai tribes, especially the Hotak had links to rulers (Hotak dynasty (1722-1729), PDPA (Communist) government, and the Taliban). The Hotak seem to have concentrated on dominating the trade sector, which is now also being infringed upon from the Durrani tribes. Among the Ghilzai are the Tokhi who can be found scattered throughout Kandahar but are found in concentration in eastern Kandahar Province and Zabul. There is a strong support for the Taliban among the Tokhi.  In Kandahar City, a separate Ghilzai shura has been formed to promote the Ghilzai among the cities business and political entrepreneurs. The Hotak are the most prominent in Kandahar city (5%), especially among the religious figures.

1 In 2009, Pomegranates were among one of the most important crops; cultivated on an estimated third of all arable land.

4 There are over 730 pharmacies in Kandahar City alone with medicine available from China, India, Iran, and Pakistan.