Topographical Features: Dominated by the Logar Valley and surrounding mountains; Spin Range in the east and south. The land of the Logar Valley is a conglomeration of irrigated fields, gardens, rainfed crops, and rock outcrops.5

Logar Province is located in Eastern Afghanistan; its borders are Kabul in the north, Nangarhar in the east, Paktia in the south, and Mayden Wardak / Ghazni in the west. The topography is dominated by the Logar Valley and surrounding mountains; Spin Range in the east and south.  The land of the Logar Valley is a conglomeration of irrigated fields, gardens, rain fed crops, and rock outcrops.

The population of approximately 330,000 are made up of Hazara, Tajik, Pashtun, Kuchi, and other minority groups. Primary occupations of the residents are agriculture, animal husbandry, day labor, and small business. Their are 720 provincial aid projects with a planned cost of over $13 million. 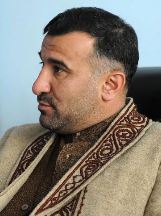 Governor Halim Fedayi (also spelled Fedai/Fedayee) is an ethnic Pashtun from Paktika province. He holds a master's degree in public relations, media, andcommunication. Before becoming governor, Fedayi worked for many international organizations (mostly American NGOs) in areas related to education, development, and human rights. He founded the South Asian Free Media Association, which he is still an editor for. Fedayi was appointed governor by Ashraf Ghani on May 29 2015.16

Taliban Shadow Governor: Mullah Rahmatullah Najib (Najibullah) - succeeded Mawlawi Abdul Karim as Logar’s Shadow Governor. He was reported killed in an airstrike in June 2016, though this is refuted by the Taliban.17 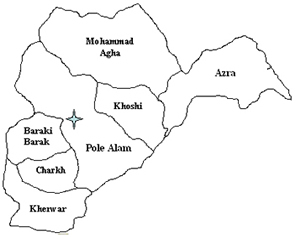 There are Ghilzai Pashtun in every district of Logar, but are particularly concentrated in Azra and Kherwar.  The largest single tribe of the Pashtun ethnicity, the Ghalji or Ghilzai, and in particular the Hotaki clan, formed the backbone of the Taliban movement. Long resentful of the power the Duranni tribe (of which Karzai and Zahir Shah are members), the Ghilzai are fiercely independent and often view themselves, as the largest grouping of Pashtuns in the country, as the rightful leaders of Afghanistan. View the Ghilzai Tribal Tree

There are some Wardak Pashtun in Mohammad Agha district.  Some leaders of the Wardak Pashtun were notorious for their opposition to the British in 1879-1880.  The Wardak tribe is subdivided in the Mayar, Mirkehl (which may be the same as the Amir Khel), and the Nuri.6 There is some disagreement whether the Wardaks are Karlanri or Ghilzai Pashtun.  Most evidence suggests they are Karlanri.  Currently several Wardak Pashtuns hold important posts in the central government, including the Ministry of Defense (General Abdur Rahim Wardak), the Ministry of Information, Culture and Youth (Abdul Karim Khoram), and the Ministry of Parliamentary Affairs.  It is also important to note that “several Islamic radicals emerged from Wardak who helped to promote and implement Taliban’s conservative interpretation of Islam."7

Khogiani reside in the eastern portion of the Azra district.  Feud with Shinwari and Ghilzai.  History of opposing the British.  They are classified as Karlanri and Hill Tribe Pashtuns. View the Khogiani Tribal Tree

Ethnic Tajiks are located in Mohammad Agha, Baraki Barak, Charkh, Pol-e Alam and Khoshi districts.  Tajiks are the second largest ethnic group in Afghanistan, after the Pashtuns and comprise between 25-30% of the population.  The Tajiks in Afghanistan tend to live in settled communities as opposed to a nomadic lifestyle.  They are of Iranian descent and primarily speak Dari.  The majority of Tajiks are Sunni Muslims.  Tajiks made up the majority of the Northern Alliance, both in terms of membership and leadership.  Tribal ties have largely broken down among the Tajiks; therefore, social organization is defined primarily by geography.  Despite their lack of cohesiveness the Tajiks are often brought together due to the perceived common threat posed by the Pashtun.8 View the Tajik Tribal Tree

There is a small percentage of Hazara in the Khoshi and Pol-e Alam districts.9 The Hazara, a distinct ethnic and religious group within the population of Afghanistan, have often been the target of discriminatory and violent repression.  Most likely descended from the Mongols of Genghis Khan, (there is also a strong argument that they are of Eastern Turkic origin), the Hazara are noticeably different in physical appearance when compared to the Pashtun majority.  In terms of religion, the vast majority of the Hazara are of the Shia Muslim faith, again in contrast to the Pashtuns who are Sunni Muslim.  Due to these differences, “the Hazara have experienced discrimination at the hands of the Pashtun-dominated government throughout the history of modern Afghanistan."10 As the traditional underclass of Afghan society, Hazara were exploited and made to work as servants and laborers.  As a result there tends to be an anti-government and anti-Pashtun bias among the Hazara.  In present day Afghanistan, the Hazara are divided geographically into two main groups: the Hazarajat Hazara and those who live outside the Hazarajat.  The Hazarajat is located in the Hindu Kush Mountains in central Afghanistan and is “centered around Bamiyan province and include[s] areas of Ghowr, Uruzgan, Wardak, and Ghazni province."11 The Hazara living outside of the Hazarajat live in and around Kabul, Herat, Mazar-e-Sharif and Samangan province.  Due to atrocities committed against them by the Taliban, the Hazara by and large are opposed to the Taliban.  In August 1998, the Taliban massacred approximately 4,000 Hazara in Mazara-e-Sharif; this massacre was followed by another the next month when the Taliban killed another 500 Hazara in Bamiyan.  The Hezb-e Wahdat (Islamic Unity Party of Afghanistan) is an umbrella political organization which commands the support of large numbers of Hazara.  The Hazara are also often at odds with the Kuchi population within the Hazarajat. View the Hazara Tribal Tree

Kuchi can be found in Pol-e Alam and Kherwar districts.12 Involved in a constant and centuries old range war with the Hazara, the Kuchi are Pashtun nomads. Drawn primarily from the Ghilzai tribe, the Kuchis have moved across Afghanistan and Pakistan for generations, and only since Pakistani independence were banned from Pakistani territory. Dispersed and well-traveled, they often receive news from distant relations in far-away provinces relatively quickly. The self-declared “leader” of the Kuchis is one Hashmat Ghani Ahmadzai. Partially settled by the king and the following socialist governments, they were strong supporters of the Taliban, both ideologically and pragmatically, as they came into possession of many Hazara lands thanks to the repression of the Shi’ite Hazara by the Taliban. There are estimated to be around three million Kuchi in Afghanistan, with at least 60% remaining fully nomadic.13

Originally a mujahideen group which split with Hekmatyar’s Hezb-e Islami under the leadership of Yunus Khalis.  HiK was dominant in Nangarhar. Khalis died in 2005 or 2006, resulting in an internal power struggle for control of the party between Khalis’ son Anwarul Haq Mujahid and Hajji Din Mohammad.  It appears that Mohammad was successful in consolidating his control over much of the party.  Recent and active political players in Nangarhar have connections to HiK.  Led by Hajji Din Mohammad, current governor of Kabul.

One of the most important parties of the Meshrano Jirga, Hamnazar (Alliance), It mainly consists of pro-Karzai MPs, who are Western sympathizers. The group numbers some thirty parliamentarians and is led by Amin Zai. A doctor by profession, he is closely allied with Karzai who strongly supported him for this position.14

Mujahideen party active since the Soviet invasion; led by Gulbuddin Hekmatyar.  Actively opposed to US-led and Afghan national forces.  Politically active in Sherzad, Surk Rod and Pachir Wa districts.  Hekmatyar is a Kharoti Ghilzai and, therefore, less influential than the much more respected and powerful Khugianis, such as Hajji Din Mohammad and Anwarul Haq Mohammad.15

7 Mirwais Wardak, Idrees Zaman, and Kanishka Nawabi, “The Role and Functions of Religious Civil Society in Afghanistan: Case Studies From Sayedabad & Kunduz,” Cooperation for Peace and Unity, July 2007, 9, at Link.