Occupation of Population: Trade, Labor, some Agriculture and Livestock.1

Transportation: Roads in Nimroz are relatively good, and the majority are all-season roads. The worst roads are in Kang. The major road runs from Ziranj through Delaram to the Ring Road; Other main roads run along the Helmund River from Dishu in Helmand Province and over the Iranian border to Zabol.

Electricity: 32%; Surprisingly, access is somewhat better in the rural parts, with 38% reported having access; 33% of the available electricity is public.3

Topographical Features: 95% flat; A lot of desert with a major lake existing in the Kang District called Hamoon Saberi.5

Nimroz Province is located in southern Afghanistan. Nimroz borders Iran in the west, Baluchistan in the south, Helmand in the east, and Farah in the north. The topographyy is mostly flat with considerable desert terrain. A major lake, Hamoon Saberi is located in Kang District.

The population of 118 thousand consist of Baluch, Pashtun, Brahui, Tajik, and Uzbek. Major tribal groups include the Barakzai, Noorzai, and Kuchi. Primary occupations within Nimroz are trade, labor, agriculture and livestock.

A Pashtun from Chahar Asyab, Governor Muhammad Samiullah received his engineering degree from Kabul University. He claims to have no political affiliations. He was appointed governor by Ashraf Ghani in May 2016. 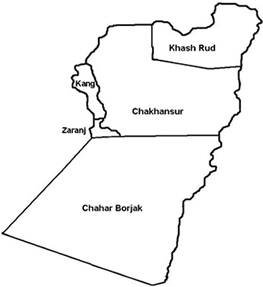 The Baluch, thought to number over a million in Afghanistan, are an Indo-Iranian ethnic group spread over Afghanistan, Pakistan, and Iran. Significant numbers also exist abroad. In Pakistan, Baluchi independence groups have fought with Islamabad over the revenues from natural resources in Baluchistan. The capital of Pakistani Baluchistan is Quetta, where many of the Taliban are thought to have fled after their fall from power, but Kalat, further south, has traditionally been the seat of the Baluch Khans. The Baluch are overwhelmingly but not entirely Sunni Muslims. Their power-structures, based on the khan, are generally perceived to be more concentrated than those of the more fractious Pashtuns. In Afghanistan they are primarily nomadic, roaming the southernmost districts of the three southernmost provinces.

Durrani Pashtuns, they rose to prominence with Dost Mohammad Shah (the British East India Company’s adversary in the first Anglo-Afghan War) and furnished a string of kings through the current aspirant to the throne, Heir Apparent Ahmad Shah. Accordingly, they are one of the most respected tribes in the country.

Numbering around a quarter million in Afghanistan, the Brahui are a small tribal group more usually found in Pakistan’s Baluchistan province. Predominantly Sunni, Brahui are descended from Dravidian tribes that once spanned across India before the Aryan invasions of 2,000 to 3,000 years ago. The Brahui language still retains the Dravidian grammatical structure, although most vocabulary is at this point Indo-Iranian in origin. Having lived amongst the Baluch for centuries, they are in many cases indistinguishable, and even provided the Khans of Kalat.

Kuchis are nomads. Kuchis are most often Pashtuns, but occasionally may be some non-Pashtun ethnicity, such as Baluch. To be a Kuchi is not who one is, or what one does, but what one is. More than a vocation and less than a race, the Kuchi are more appropriately thought of as a caste of nomadic herdsmen. Their four main animals are sheep, goats, camels and donkeys. They cross boundaries with ease. They have a very high illiteracy rate.6 Dispersed and well-traveled, they often receive news from distant relations in far-away provinces relatively quickly. The self-declared “leader” of the Kuchis is one Hashmat Ghani Ahmadzai. Partially settled by the king and the following socialist governments, they were strong supporters of the Taliban, both ideologically and pragmatically, as they came into possession of many Hazara lands thanks to the repression of the Shi’ite Hazara by the Taliban. There are estimated to be around three million Kuchi in Afghanistan, with at least 60% remaining fully nomadic, and over 100,000 have been displaced in the south of Afghanistan due to drought in the past few years.7 There are estimated to be around 30,000 Kuchi in Nimroz.8

Although usually categorized and self-identified as Panjpay Durranis, many Zirak Durranis dismiss the Noorzai as Ghalji or Ghilzai, not Durrani at all. At this point in time, it is not clear whether this is a long-standing belief or has arisen out the turmoil of the past three decades, particularly the close partnership between the Noorzai and the Ghalji-dominated Taliban leadership. Given the numbers and importance of the Noorzai in the south, this attitude may have consequences for long-term tribal politics.

Tajiks are the second largest ethnic group in Afghanistan after the Pashtuns and comprise between 25-30% of the population. The Tajiks in Afghanistan tend to live in settled communities as opposed to a nomadic lifestyle. Pashtuns refer to them as Farsiwan, or speakers of Farsi, the lingua franca of Afghanistan (50% of Afghanistan speaks Farsi, as opposed to only 35% for Pashtu). Between the Tajiks and Pashtuns there has been significant animosity in recent years. Forming the backbone of the Northern Alliance, they also have a base in the nation of Tajikistan. They held out fiercely against the Taliban. Most Tajik are Sunni Muslims, but a few are Shi’a. Tajiks made up the majority of the Northern Alliance, both in terms of membership and leadership. Tribal ties have largely broken down among the Tajiks; therefore, social organization is defined primarily by geography. Despite their lack of cohesiveness the Tajiks are often brought together due to the perceived common threat posed by the Pashtuns.9

Although primarily inhabiting the North of Afghanistan, Uzbeks can be found all over the country. At present, Uzbeks in Afghanistan number just under three million, making up approximately nine percent of the country. They are concentrated in Balkh, Jawzjan, Sar-i-Pul, Takhar, Kunduz, and Faryab provinces. The most famous Uzbek in the country is undoubtedly the warlord Abdul Rashid Dostum, a colorful character who has fought on most sides in the last thirty years. After the Taliban took control of his home base of Mazar-i Sharif he fled to Turkey, but has since returned to Afghanistan, and is once again debatably the most powerful man in Northern Afghanistan. He still claims that he can raise 10,000 Uzbeks on short notice.10 Uzbeks speak Uzbek, a Turkic language, although many, especially outside of their core areas in Northern Afghanistan, speak Dari and other languages. In Nimroz a reported 10% of the population speaks Uzbek.11

1 "Provincial Profile," Nimroz, Ministry of Rural Rehabilitation and Development and the National Area Base Development Programme, 2006, at Link.

8 “Provincial Profile,” Nimroz, Ministry of Rural Rehabilitation and Development and the National Area Base Development Programme, 2006, at Link.

11 “Provincial Profile,” Nimroz, Ministry of Rural Rehabilitation and Development and the National Area Base Development Programme, 2006, at Link.