Transportation: The lack of roads in Nuristan and the difficulty in transport is a massive problem province wide. Neighboring districts often take a week to reach, often via other provinces.

Rivers: Kunar (called the Chitral in Pakistan), Alingar, and Pech.

Topographical Features: Mountains and river gorges; the entire province is extremely difficult to access, and often impossible in winter.3

Nursitan Province is located in eastern Afghanistan, on the Afghanistan - Pakistan border. It is bordered by Badakhshan province in the north, Pakistan in the east, Kunar and Laghman provinces in the south, and Panjshir in the west. Nuristan's topography consists of mountains and river gorges; the entire province is extremely difficult to access, and often impossible in the winter.

The population of around 300,000 is almost exclusively Nuristani, with a small representation of Gujar, Tajik, and Pashtun residents. The primary occupations are agriculture, animal husbandry, and day labor. There are approximately 290 provincial aid projects with a planned cost under US$1 million.

The current reported Governor of Nuristan is Hafiz Abdul Qayum Nuristani, however there are reports that he has been removed from office in April 2016.

Nuristani was appointed Governor by Hamid Karzai in 2014. He is from the Wama district of Nuristan and earned a bachelors degree in Islamic studies in Pakistan. Nooristani's tenure has been marked with accusations of inefficiency and weak management. In 2016, there were reports of the new Afghan President, Ashraf Ghani, suspending the Nuristan Governor Office due to Nuristani's weak leadership, but the Governor himself claimed to be unaware of this action.8

Taliban Shadow Governor: Dost Mohammed (died Nov 2009) Dost Mohammed was killed in a US drone strike in Kunar Province in 2013. The current shadow governor is unknown.9 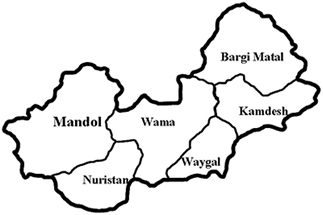 The Nuristani in Afghanistan primarily live in high elevations in northeast Afghanistan.  They trace their genealogy back to either the Greek forces of Alexander the great or to the tribes of Mecca which rejected Islam.  For centuries the Nuristanis were known as “kafirs,” or infidels (this is still a pejorative term for them).  This has changed as most converted to Islam at the end of the 19th century and the beginning of the 20th.  There are fifteen Nuristani tribes with numerous sub-groups.  Five languages and numerous dialects are spoken by the Nuristani.  They do not have overly positive relations with other Afghans or Pakistanis and a strong animosity toward Arabs. Two of the largest tribes, the Kamozi (or Kam) and the Kushtaz, have had a series of conflicts since the fall of the Taliban. Additionally, for over two decades foreign-funded Wahhabi preachers have been working to convert the tribes to their more hard-line interpretation of Islam. Nuristanis, however, remain protective of their distinctive culture. The tribes speak Dardic languages, often mutually unintelligible. Due to what many Nuristanis claim is Greek blood left over from the mighty armies of Alexander, many Nuristanis have distinctly European features, blue and green eyes, and blond or red hair. Since being conquered by the “Iron Amir” (Abdul Rahman Khan) in 1893, there has been some intermingling with Pashtuns, forced or otherwise.4 View the Nuristani Tribal Tree

Kata (Western, Nuristani SubTribe)
Occupy the majority of Daulatshai and Alishing districts.  Also reside in parts of Alingar, Mehterlam and Qarghayi districts.  The Kata are a Nuristani tribe which speaks two dialects of Kamakata viri.

Ashtu (Ashku, Nuristani SubTribe)
Also a Nuristani tribe, which with the Kata, live in the districts of Daulatshai and Alishing.

So very little about the Gujjars is known that the mere mention of them sends one scrambling for dust-covered manuscripts of the British Raj. It is thought they were initially encountered by Alexander during his thrust into India, although this and every theory about the Gujjars remains in dispute. They speak a tongue wholly unrelated to any Indo-European language, although many have by now learned local languages for commercial purposes. They roam with their herds, usually of cows, from the high Himalayas in India to the Hindu Kush of Afghanistan, although rarely are they seen in Afghanistan anymore, as Pakistan has hindered their passage through its territory and most preferred to stay within India. Some in India remain Hindu, although further west many are Muslim. Often they can be recognized by their avoidance of others, and their brightly hennaed beards. They are proud, fierce, and loyal. Their traditions are millennia old, and they have preserved them well in the face of great adversity.5 They are somewhat related to Nuristanis, although exactly how is a subject of conjecture. Similar to Nuristanis, some genetic root gives many Gujjars a distinctly European appearance, up to and including blond hair and blue eyes.

Tajiks are the second largest ethnic group in Afghanistan, after the Pashtuns and comprise between 25-30% of the population. The Tajiks in Afghanistan tend to live in settled communities as opposed to a nomadic lifestyle. They are of Iranian descent and primarily speak Dari. The majority of Tajiks are Sunni Muslims. Tajiks made up the majority of the Northern Alliance, both in terms of membership and leadership. Tribal ties have largely broken down among the Tajiks; therefore, social organization is defined primarily by geography. Despite their lack of cohesiveness the Tajiks are often brought together due to the perceived common threat posed by the Pashtuns. View the Tajik Tribal Tree

Led by former Prime Minister Burhanuddin Rabbani.  It is predominately a Tajik political party which was active in the anti-Soviet jihad and a major political player in the Northern Alliance.  Today Rabbani supports Karzai.  Yunus Qanuni’s Hezb-e Afghanistan Naween broke away from Jamiat-e Islami. The party is particularly popular in Wama and Parun districts. According to Altai surveys it comes in at 18% of the province.

Mujahideen party active since the Soviet invasion; led by Gulbuddin Hekmatyar.  HiG was famous for its shifting loyalties, and was the favorite party of Pakistan’s ISI until the rise of the Taliban. Former members continue to wield considerable influence in the province. Actively opposed to US-led and Afghan national forces.  Hekmatyar is a Kharoti Ghilzai and, therefore, less influential than the much more respected and powerful Khugianis, such as Haji Din Mohammad and Anwarul Haq Mohammad.6

Sayyaf is under the guidance of Adbul Rasool Sayyaf, and has been since the anti-Soviet campaign. Despite ideological and cultural similarities with the Taliban, Sayyaf did not join them (for personal reasons) and went with the Northern Alliance. He follows strict Wahhabi interpretations of Islam, and is not known for tolerance. In the past this party has been known for its foreign supporters and followers; the former often Arab, the latter from places as diverse as the Southern Philippines, Chechnya, and Bosnia.  In February 1993 government forces and members of the Ittihad-e Islami massacred over 700 Hazara in the Afshar district of West Kabul.

One of the most important parties of the Meshrano Jirga, Hamnazar (Alliance) mainly consists of pro-Karzai MPs, who are Western sympathizers. The group numbers some thirty parliamentarians and is led by Amin Zai. A doctor by profession, he is closely allied with Karzai who strongly supported him for this position.7