Topographical Features: The province is dominated by the Panjsher Valley and surrounding mountains; Panjsher Range to the north and the Kuhestan Range to the south; the mountain peaks are covered permanently in snow; small areas of rain fed crops.4

Panjshir Province is located in eastern Afghanistan, near the Afghanistan - Pakistan border. Panjshir is bordered in the north by Baghlan and Takhar provinces, in the east by Badakhshan and Nuristan provinces, in the south by Laghman and Kapisa provinces, and the west by Parwan province. The province is dominated by the Panjshir Valley and surrounding mountains - Panjshir Range to the north and the Kuhestan Range to the south.  The mountain peaks are covered permanently in snow. Panjshir has small areas of rain fed crops.

The population of approximately 300,000 is composed of Tajik, Hazara, Pashai, Nuristani, Ghilzai Pashtun, and other minority groups. There are over 400 provincial aid projects in Panjshir with planned costs of over US $11 million.

The Governor of Panjsher Province is Muhammad Arif Sarwari, an ethnic Tajik from Deh Mazang. He is fluent in Dari, Pashto, English, and Russian, having written his thesis entirely in Russian. He joined the anti-Soviet resistance in 1982 in Panjshir. Sarwari was appointed Governor in June 2015. Prior to that, he was a member of the Meshrano Jirga political party, Advisor to the Minister of Afghan Government Affairs, and the chief of the National Security Directorate.12 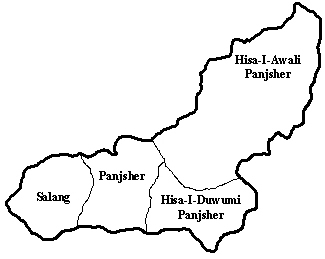 Ethnic Tajiks have a presence in every district in Parwan and are the majority in Salang.  Tajiks are the second largest ethnic group in Afghanistan, after the Pashtuns and comprise between 25-30% of the population.  The Tajiks in Afghanistan tend to live in settled communities as opposed to a nomadic lifestyle.  They are of Iranian descent and primarily speak Dari.  The majority of Tajiks are Sunni Muslims.  Tajiks made up the majority of the Northern Alliance, both in terms of membership and leadership.  Tribal ties have largely broken down among the Tajiks; therefore, social organization is defined primarily by geography.  Despite their lack of cohesiveness the Tajiks are often brought together due to the perceived common threat posed by the Pashtuns.5 View the Tajik Tribal Tree

There are some Hazara mixed with Tajiks in the Hisa-e Awali Panjshir and Hisa-e Duwumi Panjshir districts.6 The Hazara, a distinct ethnic and religious group within the population of Afghanistan, have often been the target of discriminatory and violent repression.  Most likely descended from the Mongols of Genghis Khan, (there is also a strong argument that they are of Eastern Turkic origin), the Hazara are noticeably different in physical appearance when compared to the Pashtun majority.  In terms of religion, the vast majority of the Hazara are of the Shia Muslim faith, again in contrast to the Pashtuns who are Sunni Muslim.  Due to these differences, “the Hazara have experienced discrimination at the hands of the Pashtun-dominated government throughout the history of modern Afghanistan."7  As the traditional underclass of Afghan society, Hazara were exploited and made to work as servants and laborers.  As a result there tends to be an anti-government and anti-Pashtun bias among the Hazara.  In present day Afghanistan, the Hazara are divided geographically into two main groups: the Hazarajat Hazara and those who live outside the Hazarajat.  The Hazarajat is located in the Hindu Kush Mountains in central Afghanistan and is “centered around Bamiyan province and include[s] areas of Ghowr, Uruzgan, Wardak, and Ghazni province."8  The Hazara living outside of the Hazarajat live in and around Kabul, Herat, Mazar-e-Sharif and Samangan province.  Due to atrocities committed against them by the Taliban, the Hazara by and large are opposed to the Taliban.  In August 1998, the Taliban massacred approximately 4,000 Hazara in Mazara-e-Sharif; this massacre was followed by another the next month when the Taliban killed another 500 Hazara in Bamiyan.  The Hezb-e Wahdat (Islamic Unity Party of Afghanistan) is an umbrella political organization which commands the support of large numbers of Hazara.  The Hazara are also often at odds with the Kuchi population within the Hazarajat. View the Hazara Tribal Tree

The Nuristani in Afghanistan primarily live in high elevations in northeast Afghanistan.  They trace their genealogy back to either the Greek forces of Alexander the great or to the tribes of Mecca which rejected Islam.  For centuries the Nuristanis were known as “kafirs”, or infidels.  This has changed as most have converted to Islam.  There are fifteen Nuristani tribes with numerous sub-groups.  Five languages and numerous dialects are spoken by the Nuristani.  Do not have overly positive relations with other Afghans or Pakistanis and a strong animosity toward Arabs. View the Nuristani Tribal Tree

There are some Kata Nuristani living the south-east portion of Hisa-I-Awali Panjshir district.  Also reside in parts of Alingar, Mehterlam and Qarghayi districts.  The Kata are a Nuristani tribe which speaks two dialects of Kamakata viri.

There are some Pashai in the south-east portion of Hisa-I-Duwumi Panjshir district.  There is very little useful data on the Pashai, outside of some intense research on their language.  They inhabit Nuristan, parts of Laghman, and northern Nangarhar, seemingly between the Pashtun and Nuristanis.  Many consider themselves Pashtun.  They speak a Dardic language referred to as Pashai.  Often they are associated with or referred to as Kohistani.  The majority of Pashai in Laghman rely on the livestock and timber business.9

Originally a mujahedin group which split with Hekmatyar’s Hezb-e Islami under the leadership of Yunus Khalis.  HiK was dominant in Nangarhar. Khalis died in 2005 or 2006, resulting in an internal power struggle for control of the party between Khalis’ son Anwarul Haq Mujahid and Hajji Din Mohammad.  It appears that Mohammad was successful in consolidating his control over much of the party.  Recent and active political players in Nangarhar have connections to HiK.  Led by Hajji Din Mohammad, current governor of Kabul.

Led by Mohammad Yunus Qanuni.  Part of a political alliance called Jabahai Tafahim Millie (National Understanding Front).  Qanuni was the primary contender against Karzai for the presidency.  He is a Tajik who fought alongside Ahmed Shah Masoud as a mujahedin, spokesman for Ahmed Shah Massoud, and Minister of Interior and Education.  He was elected to parliament in 2005 and was chosen to lead the Wolesi Jirga.  Support for him and his party may be a political counter-weight to Karzai.

One of the most important parties of the Meshrano Jirga, Hamnazar (Alliance), It mainly consists of pro-Karzai MPs, who are Western sympathizers. The group numbers some thirty parliamentarians and is led by Amin Zai. A doctor by profession, he is closely allied with Karzai who strongly supported him for this position.10

Mujahedin party active since the Soviet invasion; led by Gulbuddin Hekmatyar.  Actively opposed to US-led and Afghan national forces.  Politically active in Sherzad, Surk Rod and Pachir Wa districts.  Hekmatyar is a Kharoti Ghilzai and, therefore, less influential than the much more respected and powerful Khogianis, such as Hajji Din Mohammad and Anwarul Haq Mohammad.11

1 Some sources indicate that Salang district is part of the Panjsher province as well.