Occupation of Population: Agriculture, Livestock Production, and some Small and Medium Enterprises and Industries.

Rivers/Bodies of Water: Ghowr Band River with tributaries; Panjsher River along the border.

Topographical Features: Mountainous province including the Kott-I-Baba Mountain Range in the southwest, Panjsher Range in the north, Paghman Range in the southeast; River Valleys; Crops are rain fed around Charikar, which includes vineyards and gardens; Majority of territory usable as rangeland; some areas of intense irrigation; permanent snow in Ghorband and Shinwari.7

Parwan Province is located in eastern Afghanistan, nearby the Afghanistan - Pakistan border. Parwan is bordered in the north by Baghlan province, in the east by Panjshir and Kapisa provinces, in the south by Kabul and Mayden Wardak provinces, and the west by Bamyan and Mayden Wardak. The topography of Parwan is composed of Ghowr Band River and the Panjshir River. It is a mountainous province with Kott-I-Baba Range in the southwest, Panjshir Range in the north; Paghman Range in the southeast.  River valleys are prominent and crops are rain fed around Charikar district, which includes many vineyards and gardens. The majority of territory is usable as rangeland, with some areas of intense irrigation. In Ghorband and Shinwari districts there remains snow year round.

The population of approximately 560,000 is composed of Pashtun, Tajik, Uzbek, Qizilbash, Kuchi, Hazara, and other minority groups. The primary occupations are agricultre and livestock production. Many are also involved with small enterprises and industries. Parwan has over 1,000 provincial aid projects in the region, with planned costs of over US$ 22 million.

The Governor of Parwan Province is Mohammad Asim Asim, an ethnic Tajik from Baghlan, was appointed governor in June 2015 by President Ashraf Ghani. He was a member of Parliament from 2005 - 2010 and a key member of the unity government negotiation team.23

Taliban Shadow Governor: Currently Unknown - The Taliban shadow governor is unnamed, but known to Afhgan and coalition forces. He was targeted in a 2014 operation that failed to kill him. He is said to have deep ties with the Haqqani network and has led many operations that claimed Afghan and American lives.24

The Taliban deputy shadow governor is Qari Nazar Gul, and has significant ties to the Haqqani network.25 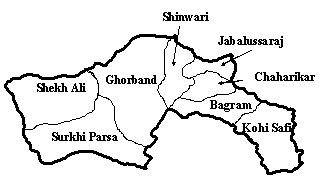 Ethnic Tajiks have a presence in every district in Parwan and are the majority in Salang.  Tajiks are the second largest ethnic group in Afghanistan, after the Pashtuns and comprise between 25-30% of the population.  The Tajiks in Afghanistan tend to live in settled communities as opposed to a nomadic lifestyle.  They are of Iranian descent and primarily speak Dari. The majority of Tajiks are Sunni Muslims.  Tajiks made up the majority of the Northern Alliance, both in terms of membership and leadership.  Tribal ties have largely broken down among the Tajiks; therefore, social organization is defined primarily by geography.  Despite their lack of cohesiveness the Tajiks are often brought together due to the perceived common threat posed by the Pashtuns.8 View the Tajik Tribal Tree

The Hazara are located primarily in the Chaharikar and Ghorband districts of Parwan and pockets may reside in other districts as well.9 The Hazara, a distinct ethnic and religious group within the population of Afghanistan, have often been the target of discriminatory and violent repression.  Most likely descended from the Mongols of Genghis Khan, (there is also a strong argument that they are of Eastern Turkic origin), the Hazara are noticeably different in physical appearance when compared to the Pashtun majority.  In terms of religion, the vast majority of the Hazara are of the Shia Muslim faith, again in contrast to the Pashtuns who are Sunni Muslim.  Due to these differences, “the Hazara have experienced discrimination at the hands of the Pashtun-dominated government throughout the history of modern Afghanistan."10  As the traditional underclass of Afghan society, Hazara were exploited and made to work as servants and laborers.  As a result there tends to be an anti-government and anti-Pashtun bias among the Hazara.  In present day Afghanistan, the Hazara are divided geographically into two main groups: the Hazarajat Hazara and those who live outside the Hazarajat.  The Hazarajat is located in the Hindu Kush Mountains in central Afghanistan and is “centered around Bamiyan province and include[s] areas of Ghowr, Uruzgan, Wardak, and Ghazni province."11 The Hazara living outside of the Hazarajat live in and around Kabul, Herat, Mazar-e-Sharif and Samangan province.  Due to atrocities committed against them by the Taliban, the Hazara by and large are opposed to the Taliban.  In August 1998, the Taliban massacred approximately 4,000 Hazara in Mazar-e Sharif; this massacre was followed by another the next month when the Taliban killed another 500 Hazara in Bamiyan.  The Hezb-e Wahdat (Islamic Unity Party of Afghanistan) is an umbrella political organization which commands the support of large numbers of Hazara.  The Hazara are also often at odds with the Kuchi population within the Hazarajat. View the Hazara Tribal Tree

The Qizilbash are located primarily in Shekh Ali and Surkhi Parsa districts.  The Qizilbash are an Imami Shia group thought to be descended from Persian “mercenaries and administrators left behind by the Safavid Emperor Nadir Shah Afshar to govern the Afghan provinces."12  After the demise of the Safavid Empire in Afghanistan, the Qizilbash, due to their higher levels of education and experience as administrators, remained influential in the Afghan court and government bureaucracies.  Their Shia faith combined with their disproportionate political influence often resulted in resentment by large portions of the Sunni majority within Afghanistan.13 Also, they were used by the shahs as personal bodyguards and assigned to put down uprisings among the populace, which further alienated them from the Pashtun majority.  Due to the persecution, religious and political, the Qizilbash frequently resorted to the use of taqiyya, the practice of precautionary dissimulation or the adoption of a dual religious identity.  In order to play a role in government and society, the Qizilbash, like other Imami Shia, publicly portrayed themselves as Sunnis or Pashtuns while they privately maintained their Shia faith.14 In present day Afghanistan, the Qizilbash continue to practice taqiyya making it difficult to gain accurate census data.  It appears that they largely reside in urban centers and “tend to be predominantly urban professionals—doctors, teachers, engineers, and lawyers."15

The Wardak Pashtuns in Parwan live primarily in Surkhi Parsa district.  Some leaders of the Wardak Pashtun were notorious for their opposition to the British in 1879-1880.  The Wardak tribe is subdivided in the Mayar, Mirkehl (which may be the same as the Amir Khel), and the Nuri.16  There is some disagreement whether the Wardaks are Karlanri or Ghilzai Pashtun.  Most evidence suggests they are Karlanri.  Currently several Wardak Pashtuns hold important posts in the central government, including the Ministry of Defense (General Abdur Rahim Wardak), the Ministry of Information, Culture and Youth (Abdul Karim Khoram), and the Ministry of Parliamentary Affairs.  It is also important to note that “several Islamic radicals emerged from Wardak who helped to promote and implement Taliban’s conservative interpretation of Islam."17

In Parwan, Safis are located primarily in the Kohi Safi district.  The Pashtun Safis historically have been one of the most dissident tribes in Afghanistan, with a major uprising against the central government in 1945-1946.  The tribe is divided into three clans, the Gorbuz, the Massoud and the Wadir.  The three clans were divided politically during the communist era.  In large part the Wadir Safis were aligned with the communists and served in the government.  Many Safi mujahedin leaders came from the Gorbuz clan.  The Massoud clan, however, was split between both sides.18

In Parwan, some Uzbeks live in Chaharikar district.  Over one million Uzbek live in Afghanistan, primarily along the northern plains.  They are often intermingled, down to the village level, with Tajiks.  Uzbeks are Sunni Muslim and speak Uzbeki, a Turkic dialect.  Known primarily for their farming and herding skills, they are also famous as businessmen and artisans.  Some Uzbeks maintain a loose sense of tribal identity.  In terms of social structure, they are firmly patriarchal with a considerable amount of authority residing in the hands of the “leaders called begs, arbabs or khans.”  Intermarriage does take place between Uzbeks, Turkomen and Tajiks, but marriage to a Pashtun is considered undesirable.  The Uzbeks have a long history of in the north part of present-day Afghanistan.  Following the Bolshevik Revolution and the attempt of the newly formed USSR to consolidate control over Central Asia, many rebels, known as basmachi, were forced to leave their homelands and immigrated to northern Afghanistan.  General Abdul Rashid Dostum is an Uzbek warlord in northern Afghanistan who remains influential.19

Kuchis are common in the Chaharikar district of Parwan.  Involved in a constant and centuries old range war with the Hazara, the Kuchi are Pashtun nomads. Drawn primarily from the Ghilzai tribe, the Kuchis have moved across Afghanistan and Pakistan for generations, and only since Pakistani independence were banned from Pakistani territory. Dispersed and well-traveled, they often receive news from distant relations in far-away provinces relatively quickly. The self-declared “leader” of the Kuchis is one Hashmat Ghani Ahmadzai. Partially settled by the king and the following socialist governments, they were strong supporters of the Taliban, both ideologically and pragmatically, as they came into possession of many Hazara lands thanks to the repression of the Shiite Hazara by the Taliban. There are estimated to be around three million Kuchi in Afghanistan, with at least 60% remaining fully nomadic.20

Originally a mujahedin group which split with Hekmatyar’s Hezb-e Islami under the leadership of Yunus Khalis.  HiK was dominant in Nangarhar. Khalis died in 2005 or 2006, resulting in an internal power struggle for control of the party between Khalis’ son Anwarul Haq Mujahid and Hajji Din Mohammad.  It appears that Mohammad was successful in consolidating his control over much of the party.  Recent and active political players in Nangarhar have connections to HiK.  Led by Hajji Din Mohammad, current governor of Kabul.

Led by Mohammad Yunus Qanuni.  Part of a political alliance called Jabahai Tafahim Millie or National Understanding Front.  Qanuni was the primary contender against Karzai for the presidency.  He is a Tajik who has been a mujahedin, spokesman for Ahmed Shah Masoud, and Minister of Interior and Education.  He was elected to parliament in 2005 and was chosen to lead the Wolesi Jirga.  Support for him and his party may be a political counter-weight to Karzai.

One of the most important parties of the Meshrano Jirga, Hamnazar (Alliance or “Same Opinion”/”Same View” Party), It mainly consists of pro-Karzai MPs, who are Western sympathizers. The group numbers some thirty parliamentarians and is led by Amin Zai. A doctor by profession, he is closely allied with Karzai who strongly supported him for this position.21

Mujahedin party active since the Soviet invasion; led by Gulbuddin Hekmatyar.  Actively opposed to US-led and Afghan national forces.  Politically active in Sherzad, Surk Rod and Pachir Wa Agam districts.  Hekmatyar is a Kharoti Ghilzai and, therefore, less influential than the much more respected and powerful Khogianis, such as Hajji Din Mohammad and Anwarul Haq Mohammad.22

1 The figure may not be accurate since the formation of the Panjsher Province.

2 Some sources indicated that the Salang District is in the Panjsher Province. A recent report on PRT activities seems to confrim that it is part of the parwan province. See Senior Airman Dilia DeGrego, "progress Continues in Parwan Afghanistan," Air Force Print News, September 11, 2007, at Link.

6 Some discrepancy. Data provided by ISAF and CJTF 82 suggests there is only one hospital. Data provided in UNHCR District Profiles suggest there are two hospitals in the province. One may have closed since 2002.

19 Mirwais Wardak, Idrees Zaman, and Kanishka Nawabi, “The Role and Functions of Religious Civil Society in Afghanistan: Case Studies From Sayedabad & Kunduz,” Cooperation for Peace and Unity, July 2007: 9, at Link.