Transportation: $21 Million new road project underway to span more than 91 kilometers from Tarin Kowt through Deh Rawod and then turn north to Oshay.

Population with Access to Electricity: 8%;2 Extremely limited, with only an eighth of the power being public.

Availability of Potable Water: 8-9% of households have access to safe drinking water eith 85-90% of water for agricultural purpose coming from surface water, and 10-15% on karezes and wells.4,5

Uruzgan Province is located in southern Afghanistan. it borders the northern portions of Kandahar and Zabul, in the east it neighbors Ghazni, in the north Day Kundi, and Helmand in the west. The topography is composed of mountains and hills with some portions of flat terrain in which the few rivers within Uruzgan pass and flow into the Helmand river.

In September 2016, Uruzgan's provincial capital, Tarinkot, was attacked by Taliban militants. The fighters reached striking distance of the Governor's compount before being repelled back.15

The population of over 320 thousand are primarily Durrani Pashtun and Hazara. The new Governor, Mohammad Nair Kharoti, is a Pashtun from Laghman Province and belongs to the Kharotai clan in the Ghilzai tribe. This is his first position in the Afghan government. He was appointed to the office in September 2015.8 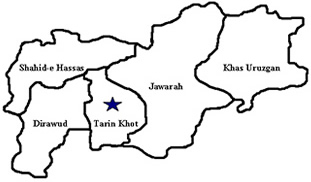 Based mainly in Shahidi Hassas and Dihrawud districts, the Noorzai are usually categorized and self-identified as Panjpay Durranis. Many Zirak Durranis, however, dismiss the Noorzai as Ghalji or Ghilzai, not Durrani at all. At this point in time, it is not clear whether this is a long-standing belief or has arisen out of the turmoil of the past three decades, particularly the close partnership between the Noorzai and the Ghalji-dominated Taliban leadership. Given the numbers and importance of the Noorzai in the south, this attitude may have consequences for long-term tribal politics. View the Noorzai Tribal Tree

Found primarily in Tirin Kot, this is Taliban leader Mullah Omar’s tribe. One of the main divisions of Ghilzais, the Hotak, or Ohtak, often lived next to and competed with the Popalzai and Tokhi for resources. Controlling the more mountainous areas of “Pashtunistan,” they often received income from trading snow, wood and higher altitude crops with their lowland compatriots. View the Hotak Tribal Tree

They rose to prominence with Dost Mohammad Shah (the British East India Company’s adversary in the first Anglo-Afghan War) and furnished a string of kings through the current aspirant to the throne, Heir Apparent Ahmad Shah. Accordingly, they are one of the most respected tribes in the country. View the Barakzai Tribal Tree

Found maily in Chora and Khas Uruzgan districts, the Achakzai were formerly part of the Barakzai grouping. The Achekzai were separated from the rest of the tribe by Ahmad Shah Durrani for management purposes, and the Achekzai remained one of the most troublesome tribes in the area. Traditionally nomadic, they further divide themselves into two large sub-groupings, the Gujanzais and the Badinzais, and had a reputation for disunity and predation.

Primarily now residing in Tirin Kot, the Hazara were half the provincial population before Uruzgan was split and Day Kundi Province was created from the northern portion. The Hazara, a distinct ethnic and religious group within the population of Afghanistan, have often been the target of discriminatory and violent repression. Most likely descended from the Mongols of Genghis Khan, (there is also a strong argument that they are of Eastern Turkic origin), the Hazara are noticeably different in physical appearance when compared to the Pashtun majority. In terms of religion, the vast majority of the Hazara are of the Shia Muslim faith, again in contrast to the Pashtuns who are Sunni Muslim. Due to these differences, “the Hazara have experienced discrimination at the hands of the Pashtun-dominated government throughout the history of modern Afghanistan."9 As the traditional underclass of Afghan society, Hazara were exploited and made to work as servants and laborers. As a result there tends to be an anti-government and anti-Pashtun bias among the Hazara. In present day Afghanistan, the Hazara are divided geographically into two main groups: the Hazarajat Hazara and those who live outside the Hazarajat. The Hazarajat is located in the Hindu Kush Mountains in central Afghanistan and is “centered around Bamiyan province and include[s] areas of Ghowr, Uruzgan, Wardak, and Ghazni province."10 The Hazara living outside of the Hazarajat live in and around Kabul, Herat, Mazar-e-Sharif and Samangan province. Due to atrocities committed against them by the Taliban, the Hazara by and large are opposed to the Taliban. In August 1998, the Taliban massacred approximately 4,000 Hazara in Mazara-e-Sharif; this massacre was followed by another the next month when the Taliban killed another 500 Hazara in Bamiyan. The Hezb-e Wahdat (Islamic Unity Party of Afghanistan) is an umbrella political organization which commands the support of large numbers of Hazara. The Hazara are also often at odds with the Kuchi population within the Hazarajat. View the Hazara Tribal Tree

Major branch of the Panjpay Durrani Pashtuns with two main sub-tribes, Jalozai and Hasanzai. Clashes between the Jalozai and Hasanzai have been a major source of tension in northern Helmand province. Present Governor Sher Mohammad Akhundzada is Jalozai while Abdul Wahid, a major figure in Baghran district, Helmand province is Hasanzai. The feud between Abdul Wahid and the father of Sher Mohammad dates back to the Jihad period.

Kuchis are nomads. Kuchis are most often Pashtuns, but occasionally may be some non-Pashtun ethnicity, such as Baluch. To be a Kuchi is not who one is, or what one does, but what one is. More than a vocation and less than a race, the Kuchi are more appropriately thought of as a caste of nomadic herdsmen. Their four main animals are sheep, goats, camels and donkeys. They cross boundaries with ease. They have a very high illiteracy rate.11 Involved in a constant and centuries old range war with the Hazara, the Kuchis have moved across Afghanistan and Pakistan for generations. Dispersed and well-traveled, they often receive news from distant relations in far-away provinces relatively quickly. The self-declared “leader” of the Kuchis is one Hashmat Ghani Ahmadzai. Partially settled by the king and the following socialist governments, they were strong supporters of the Taliban, both ideologically and pragmatically, as they came into possession of many Hazara lands thanks to the repression of the Shi’ite Hazara by the Taliban. There are estimated to be around three million Kuchi in Afghanistan, with at least 60% remaining fully nomadic, and over 100,000 have been displaced in the South of Afghanistan due to drought in the past few years.12

Uruzgan is one of the main summer pasture areas for Kuchi, who pass through the highlands of the province in summer, particularly to Chora, Gaizab and Khas Uruzgan, while they come down to Dehrawood, Terinkot, and Charchino in winter.13 They remain vulnerable to the overall lack of security in Uruzgan, and very distant from the government. According to the UN, absolutely none of their children attend school, ever. Expect this to be reflected in literacy rates.14

1 "Provincial Profile," Uruzgan, Ministry of Rural Rehabilitatin and Development and the National Area Base Development Programme, 2006, at Link.

3 "Provincial Profile," Uruzgan, Ministry of Rural Rehabilitatin and Development and the National Area Base Development Programme, 2006, at Link.

5 "Provincial Profile," Uruzgan, Ministry of Rural Rehabilitatin and Development and the National Area Base Development Programme, 2006, at Link.

7 "Provincial Profile," Uruzgan, Ministry of Rural Rehabilitatin and Development and the National Area Base Development Programme, 2006, at Link.

14 “Provincial Profile,” Uruzgan, Ministry of Rural Rehabilitation and Development and the National Area Base Development Programme, 2006, at Link.