AN EXERCISE IN LEADERSHIP

Every student that attends the Naval Postgraduate School is a leader—this simple statement is a fundamental truth inherent to the institution, but is re-enforced by the process of advanced education itself.

In the short-term, the goals of a student during his or her tour at NPS are to complete a chosen program of study with the same level of professionalism, commitment and duty any officer would approach any assignment. In time, however, like many advanced educational efforts, the true rewards of a year and a half in Monterey take time to blossom.

With resounding unity, senior officers far removed from their days at NPS trumpet the university’s impact on their careers. Leaders of the highest caliber—such as Chairman of the Vice Chief of Naval Operations Adm. Mark Ferguson, Commander of the U.S. Special Operations Command Adm. Bill McRaven, and former Joint Chiefs of Staff retired Adm. Mike Mullen—all speak of the same essential skills mastered during their days at NPS. To think, critically; to analyze problems with instinctive detail; to make sound, competent and, when needed, quick decisions…In short, to lead.

Regardless of what the degree says—and for the three aforementioned iconic service leaders, theirs read computer science, national security affairs, and operations research respectively—the benefits of an education at the Naval Postgraduate School is in time, quite common. This is an institution where more than 1,000 Navy, Marine Corps, Army and Air Force officers join their uniformed colleagues from dozens of allied nations around the world, and DOD civilians from all walks of life, in the pursuit of becoming better leaders to serve their nations.

Fortunately, and in addition to the accolades of senior alumni around the world, the Navy and its sister services don’t have to wait years for their investments in leadership to pay off. The Navy’s James Bond Stockdale Award for Inspirational Leadership recognizes two officers, O-5 or below, who demonstrate the core values of the honor’s namesake, exemplifying true leadership in the U.S. Navy.

NPS was well represented in this competition in 2012, with one of the two awardees fine-tuning his own leadership skills throughout the halls of this university. And if leadership truly is a hallmark byproduct of advanced education, it should come as little surprise then, that the winners for 2013, Cmdr. Richard Massie and Cmdr. Leif Mollo, were both recent graduates of the Naval Postgraduate School.

“NPS’ defense analysis/special operations, low intensity conflict curriculum expertly focused on education that proved to be of great practical use during my subsequent tours. I found myself constantly applying what I learned in a variety of environments, whether it was overseas working with foreign counterparts, in a leadership position at [Naval Special Warfare] command, or while serving on a joint staff.” 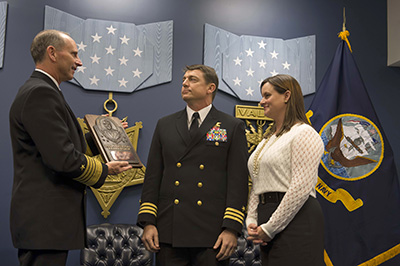 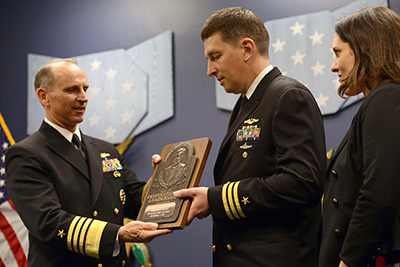