MASTERS OF THE EM DOMAIN

Chief of Naval Operations Adm. Jonathan Greenert has been a vocal proponent of the importance of electromagnetic (EM) spectrum research, and one of the hottest areas of study involves the environmental effects on EM wave propagation.

“The electromagnetic (EM) spectrum is an unseen but integral part of our daily personal lives. And, it is essential to our military operations. Failing to use it effectively will be the difference between victory and defeat," said Greenert during a 2012 conference.

“The need for precise prediction of the EM environment becomes more of an issue as Electromagnetic Maneuver Warfare (EMW) grows as a major warfighting component in the current and future Navy,” said Wang. “This is the main reason that the Department of Defense, particularly the Office of Naval Research, supports extensive research efforts such as CASPER.

“NPS Department of Meteorology faculty and students have been actively involved in this research area for years and will continue to be leaders in this field of important Navy applications,” continued Wang. “CASPER and similar research projects give our students the opportunity to explore highly Navy-relevant research topics, which I think is important to their educational experience at NPS.”

The application of research to the Navy and DOD's most pressing issues … At NPS, it’s a priority for nearly every research effort that is underway across campus. 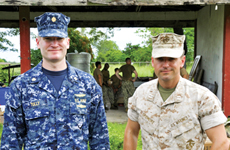 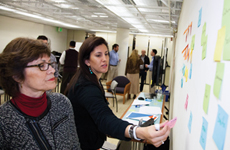 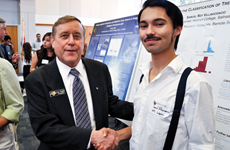 NPS President retired Vice Adm. Ronald A. Route congratulates STEM summer intern Samuel Villavicencio after a brief presentation of his research project, Aug. 22, 2014. Dozens of interns from nearby Hartnell Community College participate in internships across the NPS campus each summer. 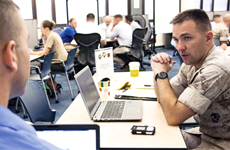 U.S. Marine Corps Capt. Ronald Garrick from Manpower and Reserve Affairs presents a thesis idea to an NPS student during the Thesis Research Working Group (TRWG) meeting on the NPS campus, Aug. 25, 2014. The TRWG affords sponsors an opportunity to present students research subjects that could immediately impact the fleet.