When graduates complete their studies at the Naval Postgraduate School, it is their singular purpose to return to their respective service with an advanced set of skills to more effectively accomplish their missions. It is a return on an investment.

This is that return … the USS America, the first of the America-class amphibious assault ships, and an engineering wonder. With a displacement of 45,000 tons, the America is as large as many allied nation aircraft carriers. Her technologically-advanced, green power plant is projected to save an average of $15 million in fuel costs every six months. And at her helm, and throughout her wardroom, are graduates from the Naval Postgraduate School.

“The America is a very complex system with engineering systems throughout, [and] my engineering background really helps a lot,” Hall said. “Going to NPS gave me a broader perspective of the Navy. You get to spend time with officers from different communities, different services and international students; it really helps you to broaden your horizons. I highly recommend it to all of my junior officers.”

“Attending NPS increased my loyalty to the [Navy] as a whole, because I think if we value our people we want them to develop personally and professionally and part of that is education,” added Baze.

With the America commissioned, and now stationed in her homeport in San Diego, she stands poised to serve her role to the Fleet. And the Naval Postgraduate School is proud to play a role in her ability to project power around the world. 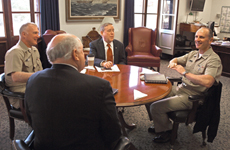 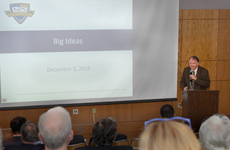 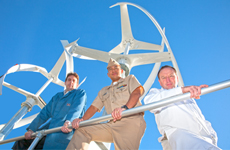 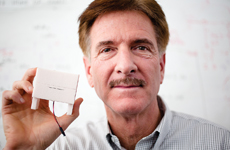 Professor David Jenn with NPS’ Department of Electrical and Computer Engineering holds his recently patented Dipole with an Unbalanced Microstrip Feed antenna, Dec. 14. The tiny antenna, known in the industry as a “rectenna,” captures ambient electromagnetic waves and converts them to usable current.