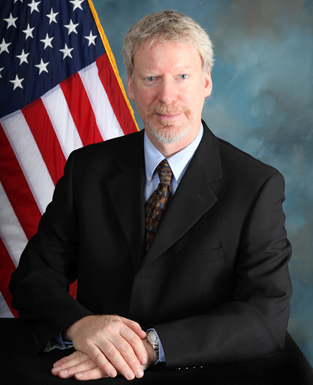 Dr. Jeffrey D. Paduan was appointed Dean of Research in July 2012. Prior to his appointment, he served as chairman of the Department of Oceanography.

Paduan received his B.S.E. from the University of Michigan in 1982 and his Ph.D. in physical oceanography from Oregon State University in December of 1987. In 1991, he joined the faculty of the Department of Oceanography at the Naval Postgraduate School (NPS) where his research has focused on the application of high frequency (HF) radar systems in coastal oceanography. In 1997, he co-edited a special issue of the Oceanography Society’s journal (Oceanography, vol. 10, #2) devoted to this topic and, in March 1999, he overviewed this research area as the keynote speaker for the IEEE 6th Working Conference on Current Measurement Technology. In 2001, he co-founded the International Radiowave Oceanography Workshop (ROW; http://radiowaveoceanogrphy.org), which continues to be an important focal point for this growing branch of marine science.

Prior to moving to NPS, Dr. Paduan was a research scientist at Scripps Institution of Oceanography. There his research focused on larger-scale current structures as measured by satellite-tracked surface drifters. In recent years, Dr. Paduan has been principal investigator for a series of projects around Monterey Bay that have brought together observations, modeling, and data assimilation of circulation and ecosystem responses. He also designed and conducted a series of environmental assessments to characterize the thermal plumes produced by the Moss Landing and Morro Bay power plants. Dr. Paduan is the co-author of 49 publications and numerous technical reports related to the physics of the upper ocean.